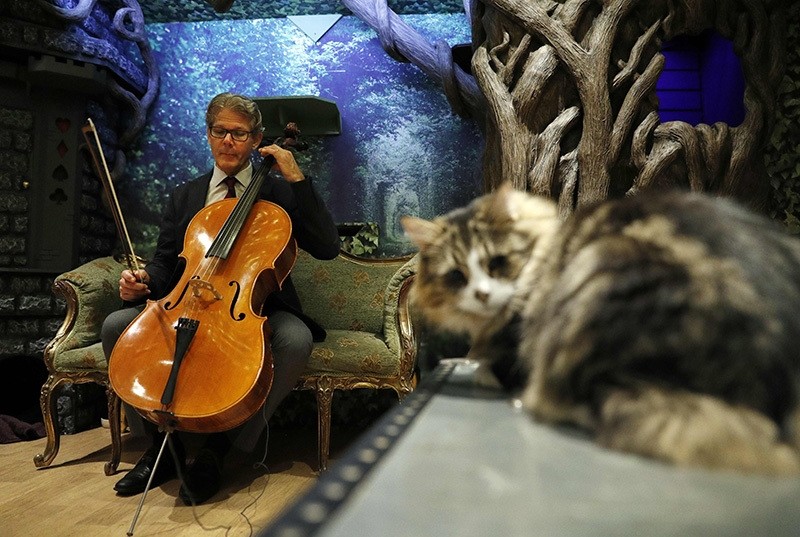 David Teie, an US composer and cellist, prepares to play his cello during a interview to ptomote his new album ,Music for Cats, at Lady Dinah's Cat Emporium in London on October 18, 2016.
by Compiled from Wire Services Oct 23, 2016 12:00 am

David Teie plays a few high-pitched notes on his cello before passing to the low ones, stopping Lizzy, a small black cat with white paws, in her tracks.

Donnie, a white and ginger tomcat, abandons his favorite plaything -- a toy mouse bouncing on a piece of string -- to approach the American musician.

Curious, he raises up on his back legs and puts his paws on Teie's knees during an unusual performance in Lady Dinah's cat cafe in Shoreditch, east London.

Despite an allergy to cats, American cellist Teie has created the world's first album entirely for felines and is distributed by a major label, Universal Music.

Teie is purring over the positive reception for his feline music, which has climbed to No. 1 on the iTunes Classical Music Chart and Amazon UK's Classical Orchestral Music Chart.

"Many of the cat owners have told me they find it pleasing for themselves, too, and so there's a kind of a shared experience for the cats and their cat owners," he said.

The purring and murmuring sounds which make up "Music for Cats" take inspiration from the noises kittens hear like birds chirping or their mother's purr.

"I have something like 26 different purr instruments," Teie, a music teacher based at the University of Maryland who has performed with the US National Symphony Orchestra, told AFP.

The 60-year-old, dressed in a tie and with his wavy grey hair neatly combed, picked a cat paradise to unveil his work.

The residents are kept entertained with walkways, hiding places, baskets, scratching boats and a vast array of toys.

"I use ten acoustic instruments but nearly all of the sounds have to be modified in electronics and software to make animal sounds," he said.

"I thought if I write music that cats like but cat owners think is irritating, they just won't put it on. So I put a layer of human music to make it hearable and in fact calming for people as well."

Lauren Pears, owner of Lady Dinah's, said Teie's music is not dissimilar to the music she would usually play in the cafe.

At first she had her doubts about how the animals would respond to the music, but she found the felines curious and engaged.

"All morning they have been sort of watching him and they seem really, really interested in it," said Pears, who opened the cafe after taking inspiration from similar cat venues in Asia.

Poppy Childs, a 21-year-old nursery nurse, said she is always looking for new purchases to keep her elderly cat entertained.

"I try to find things to keep her going so I would love to buy the album and make her listen to some music. It would be great, it sounds pretty cool," she said.

"Music for Cats" was released on October 14.

"We're thrilled to be part of this world-first project and break into the massive untapped market of non-human music fans," said a spokesperson for Universal Music.

Cats are big business in Britain, with £4 billion pounds (4.5 billion euros, $5 billion) spent by owners on the country's seven million cats every year, according to one report.

For Teie, the animal music market need not be limited to cats.

"I have designed music for horses and I'm ready to start recording... I'm doing research for dogs.

"They are next but it's going to be a challenge because, for example, chihuahua music and labrador music are very different," said the composer.