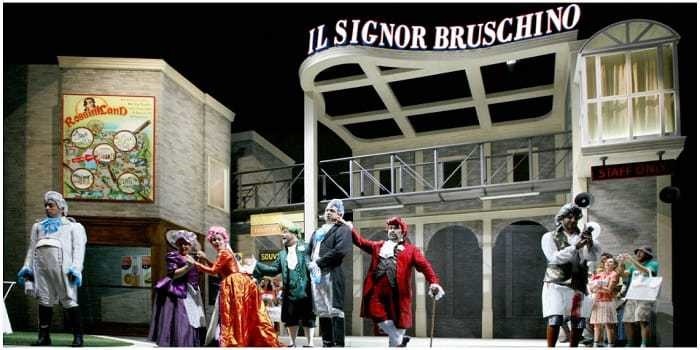 by Anadolu Agency Nov 01, 2016 12:00 am
Described as one of the masterpieces of comic opera (farsa giocosa), "Il Signor Bruschino" by world-famous Italian composer Gioacchino Rossini will be presented to art lovers at its Ankara premiere following its debut in Istanbul 25 years ago.

Directed by Aydın Buğra Güven, the Ankara premiere of the opera will be held on the stage of the Leyla Gencer Opera and Art House on Nov. 8.

Speaking to Anadolu Agency (AA), Güven said "Il Signor Bruschino," which was brought into the opera literature by Rossini, was one of the most precious masterpieces of the comic opera.

Pointing out that Rossini composed four farces, beginning with "La cambiale di matrimonio" (Bill of Exchange of Marriage) and ending with "Il Signor Bruschino" in 1813, Güven said the libretto of the art piece composed by Gioacchino Rossini when he was only 21 years old was written by Venetian poet Giuseppe Maria Foppa with the inspiration from the play titled "Le Fils Par Hasard" by Alissan de Chazet.

Suggesting that the rhythms created by secondary violins that are instructed to tap their bows on their music stands at the beginning of the opera are widely accepted as a new musical effect and attract a great deal of attention worldwide, Güven said, "The art piece that audiences saw for the first time 203 years ago was staged for the first time in Turkey in the 1990s, and attracted a great deal of attention from the audience. One of the masterpieces of comic opera, this piece will be staged for the first time following this date in Ankara by the Ankara State Opera and Ballet."

Stressing that this one-act opera remains popular, Güven said it centers on the fact that human ego is bound to lose against hostility, and grudges against love.

Güven noted that Gaudenzio, the protagonist of the art piece, suggests people will not be content with what they have on this stage called the world.

"The origin point is actually the same as Shakespeare's. The world is a stage and all men and women are just actors," Güven noted.

"Gaudenzio, who is unable to control his grudges and hate enough, hates a dead person and pays Senator Florville off, but he loses in the face of the love between the son of the man he hates and his adopted child, and has to kneel; meaning that love wins in the end."

Stating that they carried the "timeless opera", which still has a place in the present due to its plot and messages, Güven said since people miss the past, especially the 1970s and 1980s, they adapted the costumes in accordance with 1970's style. "We wanted our spectators to go back in time, soothe their longing, and experience the texture and colors of those days and smile, if even for just an hour while having fun. We promise our spectators an incredibly beautiful score, an art piece written by a genius, a visual feast and plenty of laughter," Güven concluded.
RELATED TOPICS