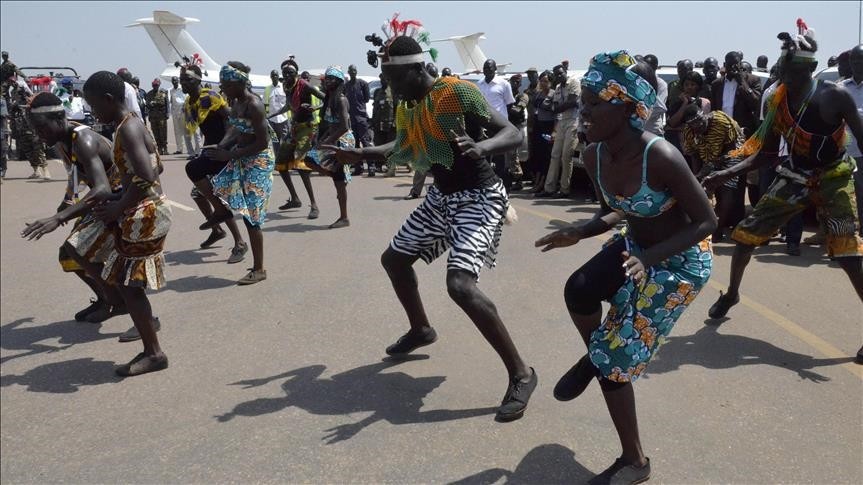 by Anadolu Agency Dec 12, 2016 12:00 am
Sweet melodies can be heard over the unusual calm of South Sudan's capital Juba on this hot December evening amid the rush of people returning home from work.

The Alabu Dance Contest has gathered local artists and youths from different parts of the country, as citizens embark on initiatives to restore unity in the war-torn country mired by ethnic tensions and the risk of genocide. "We are very much aware of the fact that the people of South Sudan have never known true peace since independence. Our country is dominated mostly by a culture of violence caused mainly by the struggle for survival and power on ethnic and religious lines," Andras Kamasi, the CEO of KilKilu Ana Comedy Extra and organizer of the Alabu Dance Contest, tells Anadolu Agency.

"We are doing this to promote inclusive unity and peace. Through music, dance, comedy and working together as brothers and sisters, even though the participants come from different tribes," he says.

For many youths growing up in the conflict-ridden city of Juba and in other parts of the country, dance and art represent alternatives to the lure of armed groups. "This initiative provides an opportunity for us youths to show off our skills and talents, and do something positive with our lives and for the community," said Jima Taban, one of the competitors.

Every week at the Nyakuroun cultural center in the capital, the youths gather to dance, watch comedy shows and share street art, which principally feature peace and unity themes.

Young Taban says he found healing on the dance floor. "Once I am here, I forget many problems including the death of my father who was killed in 2014 in Malakal [near the northern border with Sudan]," he says.

Juba boasts popular clubs, such as Club Signature, Vegas, Club 64 and a mass bar and bistro, but the spate of violent attacks since 2013 has hampered nightlife.

Reports of killings have prompted government troops to more strictly enforce a curfew.

Today, with the bitter civil war still raging, musicians are scattered. "Some of our colleagues are refugees in neighboring countries, while others are still struggling to live and perform in the conflict-torn country," local dancehall artist known for his Jamaican accent YogoMan reveals.

He says the main challenge is recording. "Like you know, modern equipment for recording is not here in South Sudan, you have to go to Uganda or Kenya where there are good music promoters and good facilities," he says. "The worst thing for me was organizing a show, and people don't turn up due to insecurity. Fans complain of harassment by security forces," he adds. "Music these days is like a cure or painkiller," says Jimmy. The 24-year-old who regularly braves unknown gunmen and ethnic targeted killings on the roads of his six-hour journey to Nimule, near Uganda border to go and perform. "You have to take the risk. When I sing I earn something to keep my music going, and when I don't sing just like during the fighting in July, life becomes hard."

Rasta, who doubles as an Afro pop musician, has been touring some towns in the country using his music in local Arabic, the capital's own dialect, to promulgate his peace songs.

As South Sudan enters the fourth year of war, rifts along ethnicity increasingly manifest themselves with a "potential for genocide", the UN special advisor on genocide, Adama Dieng said in Juba last month.

For over three years, South Sudan has been immersed in conflict. Tens of thousands have been killed and millions displaced as government forces loyal to President Salva Kiir and armed opposition groups led by ex-vice president Riek Machar battle in the oil-rich East African nation.
RELATED TOPICS