Syrian children sing to end war in their home country 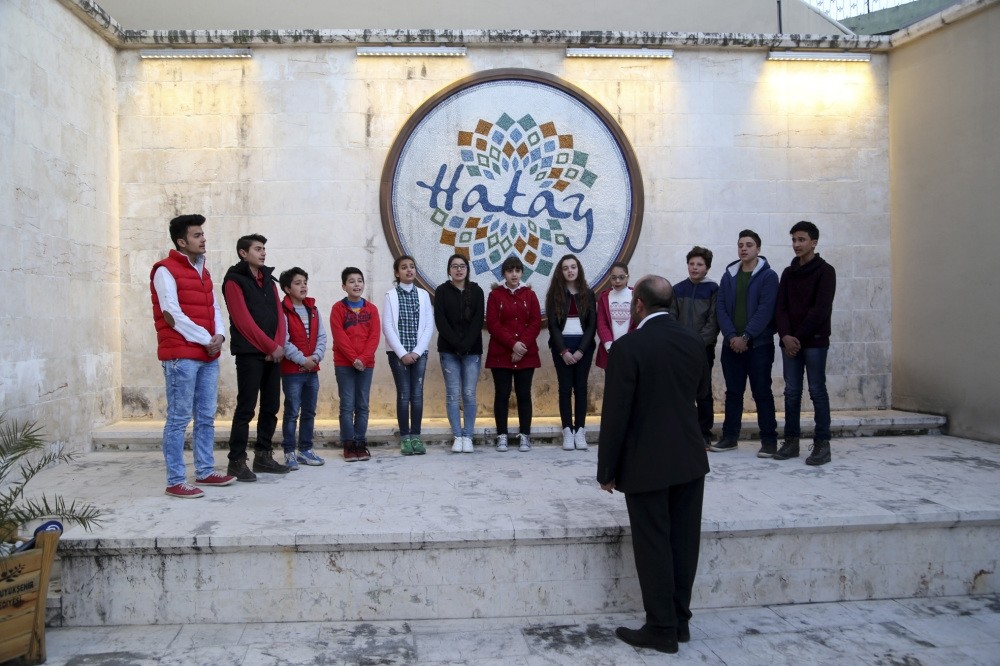 by Anadolu Agency Mar 01, 2017 12:00 am
The Refugee Children's Choir consists of 15 Syrian refugee children taking shelter in the southern province of Hatay in collaboration with the Hatay Metropolitan Municipality and the Syrian Culture and Humanitarian Aid Association, singing songs in Turkish, English, French and Arabic in hopes to stop the war and deaths in Syria. The organizer of the choir and Antakya Civilizations Choir President Yılmaz Özfırat shared his views on the bloody civil war in Syria and gave information about the Refugee Children's Choir to an Anadolu Agency (AA) correspondent.

Pointing to the severity of the situation in the Middle East with the blood shed in the region reaching an alarming rate, Özfırat said the formation of the children's choir was the result of efforts to find a way to help the 3 million internally displaced Syrians, allowing the children to sing songs about the things that adults would not even dare to say.

Stating that Syrian children are grateful to Turkey for the help they have been provided, Özfırat said: "You may not speak their language, but they are able to touch the hearts of others directly through their music. Hence, we decided to form this choir composed of the children of war. These young voices say they want peace to come to their homeland and want to go back to their countries with all their heart and soul. They are grateful to Turkey for welcoming them with open arms."

Özfırat said the main reason for initiating the choir project has been to make Syrian children happy, adding that the project will continue in the future. "One of our goals is to give a live concert at the U.N. office in Geneva. We want children to say that the "World is bigger than five," so that peace will come to their homeland. Hopefully, children will convey the troubles they have endured and that the only country truly helping them has been Turkey. These children are calling on the U.N. to solve the problems in their country."Özfırat strives to create a universal language through the choir of refugee children. Since the children are constantly longing for their homeland, Özfırat and his team taught children the Turkish song titled, "'Orada bir köy var uzakta" (There is a village there, far, far away) to emphasize their longing for their country and homes. An original song titled "Aleppo" was composed specifically for the children to sing. "All children want the humanitarian tragedy in Aleppo to end and sing of their desire in four languages," Özfırat added.

Syrian Culture and Humanitarian Aid Association President Muhammed Kindavi also explained that the Hatay-based association has been carrying out educational, cultural and art projects geared for Syrian refugee children since 2013. Kindavi said their aim is to expand the choir and help Syrian children make their voices heard throughout the world.

Sharing his feelings about the choir, Semir Kokaş, 10, said he came to Turkey three years ago from Damascus with his mother, father and three siblings. Kokaş said that despite the alarming number of civilians dying in Syria every day, the world continues to remain silent. "I do not want children to die in Syria. We want beautiful days to come. I want to return to my country and play games," he said.

Aya Riyani, 12, is another Syrian child that wants the civil war in Syria to come to end as soon as possible and peace come to their country. Riyani said becoming a part of the choir is a contribution to promoting peace in Syria.

The Refugee Children's Choir will perform live in Hatay and İzmir in March.
RELATED TOPICS