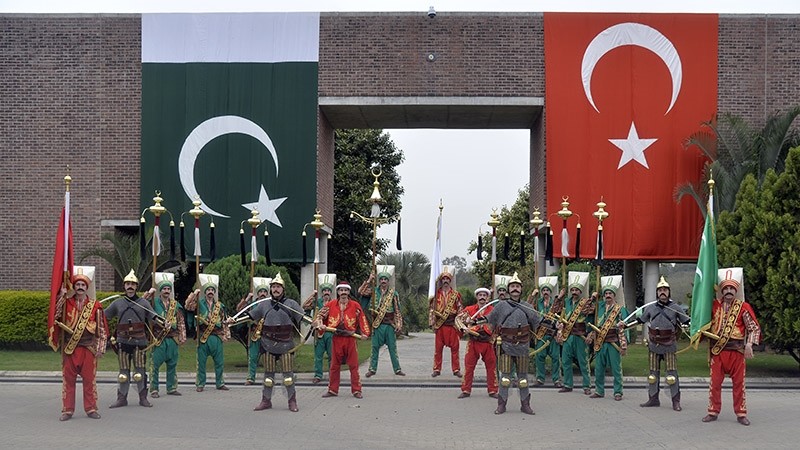 A Turkish military band won the hearts of millions of Pakistanis when it played Jeeway Jeeway (Long Live) Pakistan tune during a parade to mark the country's republic day in the capital Islamabad Thursday.

Emotional crowds gave a standing ovation to the Turkish band, which also played and sang the popular song, Dil Dil (Heart Heart) Pakistan a day earlier at a separate event in the Turkish embassy Wednesday.


A live telecast by state-run Pakistan Television showed thousands of men, women and children waving national flags, and repeating after the tune played by the Turkish military's Janissary Mehter band.

Chief of Army Staff Gen. Qamar Javed Bajwa was also present at the national event held at the Shakarparian-Islamabad area.

This was the first time the Janissary Mehter, which was established in 1299, participated in the Pakistan Day military parade.

Several units from Pakistan's army, air force, and navy participated in the parade. Fighter jets led by Air Force Chief Sohail Aman also held a fly past before the crowds.

The nuclear-capable missiles Hatf, Ghouri and Nasr were also displayed.

Hussain and Sharif vowed to continue the country's war against terrorism.

Criticizing India's "irresponsible" attitudes, Mamnoon said Pakistan was ready to promote dialogue with its neighbor nevertheless. During his speech, he also touched upon the Kashmir issue and said Pakistan favored resolving the dispute within the framework of UN resolutions.

In his message, Sharif said: "During the last three years, the army, security agencies and people have rendered sacrifices to make Pakistan a cradle of peace.

"The government has maintained its focus on accelerating economic prosperity and progress."

Pakistan's military parade remained suspended from 2008 to 2014 due to security concerns, and only resumed in 2015.

The event is held annually on March 23 and commemorates the adoption of an independence resolution -- commonly known as Pakistan Resolution-in northeastern Lahore city in 1940, which demanded for the first time an independent state, comprising Muslim-majority states in the then United India under British colonial rule.

The passing of the landmark resolution subsequently led to the creation of Pakistan on Aug. 14, 1947, marking the end of over 150 years of British colonial rule.

Defense cooperation between Islamabad and Ankara has increased in recent years with Islamabad considering the procurement of Turkish Aerospace Industries T-129 attack helicopters.

In November 2016, Ankara announced it will buy 52 Super Mashaak training aircraft from Pakistan, in addition to a $75 million deal signed in May last year, under which Turkey would modernize Pakistan air force's F-16 fleet.