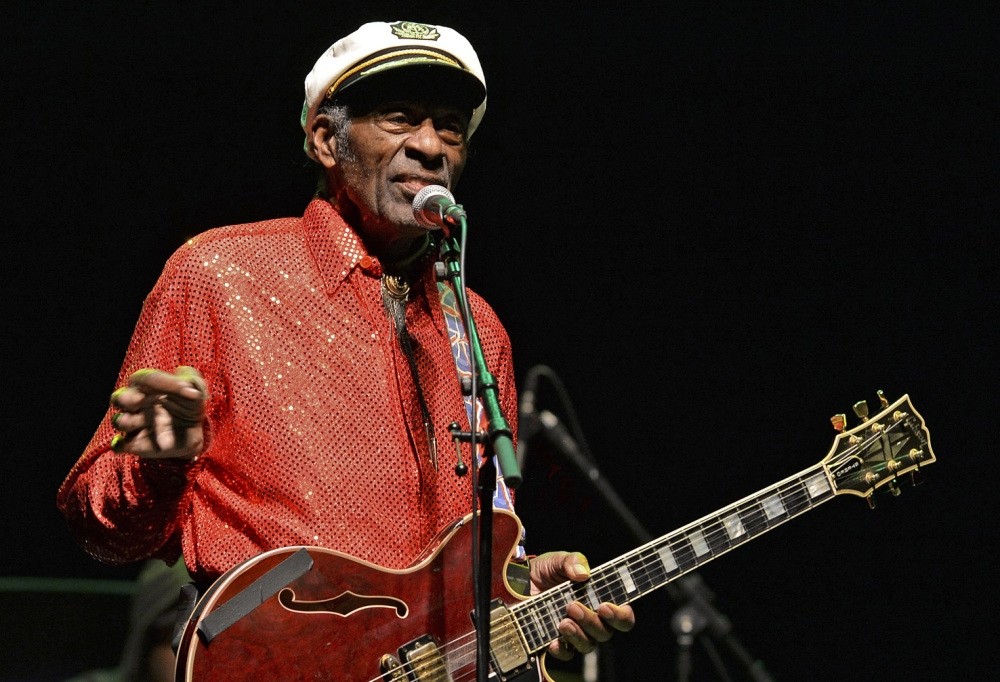 Photo shows legendary U.S. singer and composer Chuck Berry, one of the pioneers of rock-and-roll, performing at a concert in Montevideo.
by Mar 24, 2017 12:00 am
Days after he died at age 90, a new song came out on Wednesday from Chuck Berry driven by the sort of rollicking guitar riffs that created rock 'n' roll.

"Big Boys" is the first song from the rock pioneer's "Chuck," his first studio album in nearly 40 years. His label said the album will come out on June 16.

The first single starts with a signature Chuck Berry guitar solo with echoes of his legendary hit "Johnny B. Goode" - an electric bolt of energy that seamlessly marries blues and country music.

Over a rockabilly piano, "Big Boys" heads into a classic rock 'n' roll time signature before closing with a solo contributed a much younger guitar great, Tom Morello of Rage Against the Machine fame.

Lyrically the song returns to Berry's favorite theme of youthful freedom, if from a 1950s context. Berry sings of seeking fun as a teenager and wooing a girl at a school dance.

"I was bright in school but my future looked dim / 'Cause the big boys wouldn't let me party with them," sings Berry, showing little of his advanced age.

Berry had announced the album in October to celebrate his 90th birthday, stunning the music world as he had kept to himself for the past few decades other than keeping a regular gig in his native St. Louis.

Berry's label Dualtone said that Berry found "a great sense of joy and satisfaction" in his life's final few years as he wrote and recorded "Chuck."

"While our hearts are very heavy at this time, we know that Chuck had no greater wish than to see this album released to the world, and we know of no better way to celebrate and remember his 90 years of life than through his music," the label said in a statement.

"Chuck" looks set to feature a sequel of some kind to "Johnny B. Goode," the track listing includes a track called "Lady B. Goode."

Released in 1958, "Johnny B. Goode" recreated the quintessentially American rags-to-riches tale for the new rock generation, with a poor boy finding fame by dint of his guitar.

The song so represented rock 'n' roll that the US space program placed it on the golden record of the Voyager mission to introduce the genre to potentially inquisitive extraterrestrials.

Berry died on Saturday at his home outside St. Louis, where an emergency team found him unresponsive.
RELATED TOPICS