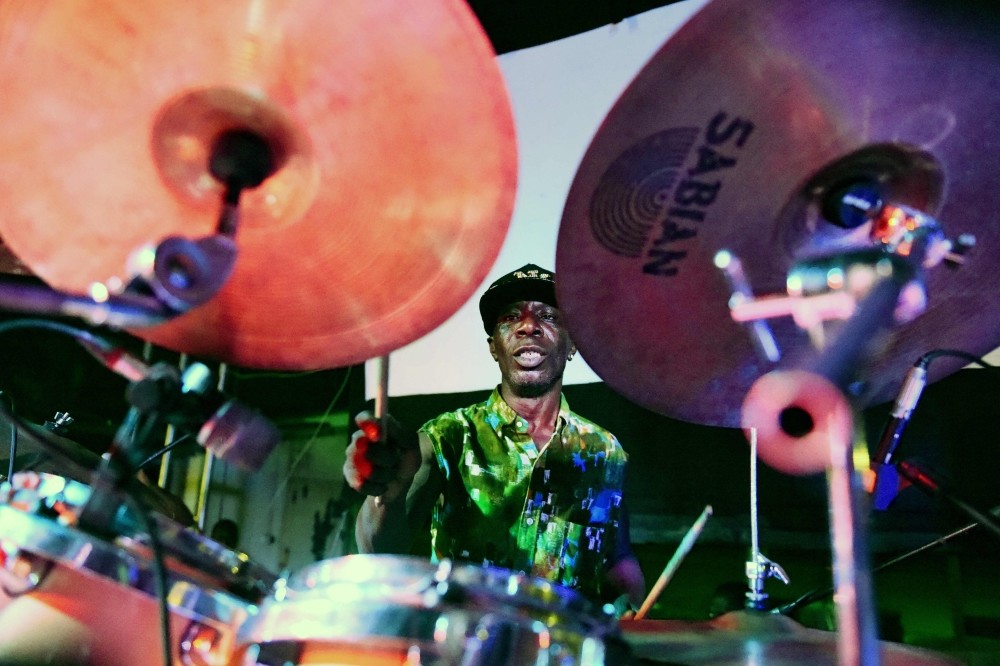 Paco Sery performes on stage during an hommage to the victims of the March 13, 2016 terror attack at the resort of Grand Bassam, east of Abidjan.
by French Press Agency - AFP Apr 25, 2017 12:00 am
Paco Sery was a kid banging on tin cans before a job at a Club Med in Ivory Coast opened the way to drumming for Congo's rumba king Papa Wemba as well as Nina Simone and other jazz greats.

The Ivorian drummer has performed with Manu Dibango and Dee Dee Bridgewater, displaying a talent and fervor that could only lead to Paris, a European hub for mixing and merging global styles.

French jazzman Eddy Louiss, a genius of the Hammond organ, took him on for a tour.

"That was amazing. People made me listen to all the great musicians. I also found myself playing in front of them," recalls Sery, now nearly 61 years old.

In his music career Sery became a core member of Sixun, an experimental jazz fusion band that saw the light of day in 1984 and made a dozen records by 2010, while the musicians also nurtured side-projects.

"Zawinul was a great guy," Sery says. "We played together often."

He became a drummer in the Zawinul Syndicate, an international ensemble whose release "My People" was nominated for a 1997 Grammy Award for Best World Music album.

In 2009, a live double album by Zawinul's band, called "75" and featuring Sery, won a Grammy for Best Contemporary Jazz Album.

Born into a family of 18 children in Divo, a small town 180 kilometers (112 miles) west of Abidjan, Sery would accompany his older sister Lucie to local dance contests.

"She won little things, a bit of money, and I immersed myself in the music. I wanted to do everything like her," Paco recalls, but he was mostly infatuated with the glistening drums.

From such makeshift beginnings, Paco was totally self-taught. "I watched the drummers, their movements, the way they did things and later I imitated them."

The racket infuriated his father. "Every afternoon, since I couldn't play at my dad's, I went to play at my aunt's. That was fun for her with her alloco (fried plantain) business. She sold allocos with that!"

Paco was just 10 when he tried his luck at a dance hall. "I managed to sneak into the hall and during the break, I asked the bandleader, who was also the drummer and the singer, if I could have a go. 'You're a child, you've got a cheek,' he said. 'Give it a try!' So I did. All the musicians were surprised. 'We'll hire you,' the bandleader said."

"I told myself that it wasn't worth asking my father and went off with them at the age of 10. We went to Dabou and I earned 30,000 CFA francs (45 euros) a month as well as board. In those days, that was enormous," he added.

The child wonder frequented night clubs, concert venues and dances, and he was invited to perform on television. He played with artists of all kinds, from the stars of Ivorian pop to rumba musicians and singers covering American and French hits.

"These are super memories because every singer I played with was a new experience. That's how I got my musical training. When I was young, I didn't want to get stuck in a rut. I wanted to take everything in, discover and play it all. All styles. That hasn't changed. Today I still want to play everything: Jazz, coupe-decale, hip-hop, rumba, rock, pop music, rap [...] it doesn't matter," the musician laughs.

In the 1970s at Club Med Sery was a "drummer-DJ at the nightclub" and "waterskiing instructor by day," incidentally gaining a part in the cult 1978 French comedy film "Les Bronzes."

He remained in Ivory Coast for another half-dozen years before trying his luck in Europe.

He frequented the most renowned jazz dens of Paris from the Chapelle des Lombards to the River Bop and Le Chat qui Peche. Once he was established, he had a hand in launching the Sunset-Sunside club in the heart of town.

While with Sixun, Sery toured with Pastorius and gained a painful insight into self-destruction with drugs. "I don't want to talk about it. At the end, Jaco just wasn't there."

Now Sery says he dreams of completing "a symphonic composition with the Budapest Philharmonic Orchestra."

"I did it (the symphony) by ear, by listening to cassettes and imitating them," he explains.

"I should like to teach young people," he adds about his other dream of founding a music college in his homeland.
Last Update: Apr 25, 2017 1:00 am
RELATED TOPICS