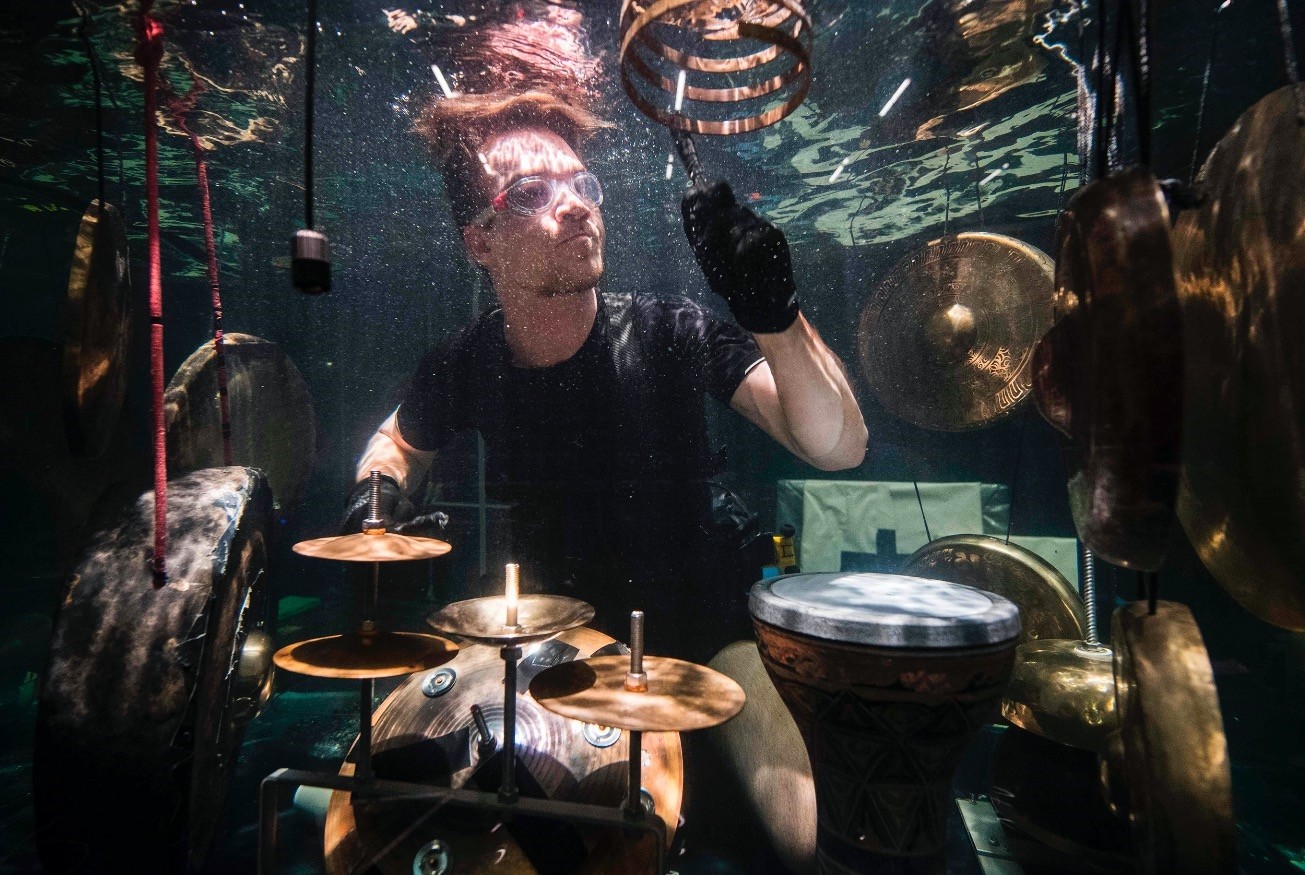 A group of innovative Danish musicians, submerged like fish in an aquarium, are creating underwater concertos with instruments specially adapted to resonate in a silent world

In the central Danish town of Aarhus, Godsbanen Center's concert hall looks more like a fish farm than a music set with its mix of water tanks, canisters, tubes, pipes and retro-futuristic details.

One by one, the five members of Between Music - Laila Skovmand, Robert Karlsson, Morten Poulsen, Dea Maria Kjeldsen and Nanna Bech - descend into individual glass-paned tanks for their latest project, AquaSonic, where they play the violin, cymbals, bells, pedaled crystallophone and a long necked hurdy-gurdy.

Hydrophones, or special microphones that pick up sound underwater, amplify the sound waves, producing music that resembles the watery chords of whale songs.

A pioneer in the field of aquatic music, Skovmand plays several roles in the ensemble: Artistic director, music and lyrics writer, as well as vocalist. She sings both underwater and above the water's surface.

Like a siren, her lips at water level produce a captivating chant. 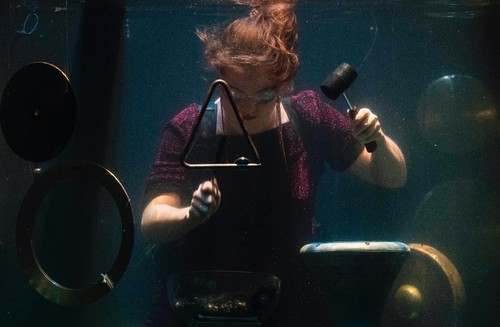 "I'm an educated singer, and I wanted to explore new songs. I got the idea that if I sang into the surface of the water I might get some other timbre, some delays, so I tried that," she explained.

The group collaborates with engineers and instrument makers to develop water-resistant instruments whose sounds coincide with the harmonies composed by Skovmand.

"There are a lot of musical limitations. There are so many things we can't play because of the challenge of the water, the struggle with the sound, but I think that what the water gives is a special kind of timbre that you can't get in air," she says.

The resulting effect is closer to an accompaniment for Tibetan meditation than it is to chamber music and is far from other well-known tributes to water, such as Maurice Ravel's "Fountains" or Luciano Berio's "Water Piano."

While the water transports the sound, it also stifles and considerably slows it down with the resulting effect that resembles Pink Floyd or Jean-Michel Jarre on slow playback.

Musician and producer Karlsson plays a violin made of carbon fiber and the crystallophone, a distant relative to the glass harmonica invented by Benjamin Franklin. 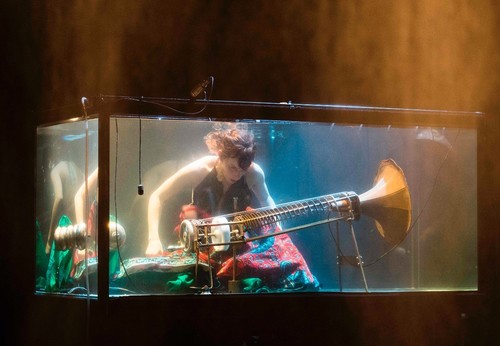 Bech performs on the rotacorda, an instrument inspired by the traditional Byzantine instrument, hurdy-gurdy. It has six stainless steel strings that can make sound through either sustained pulling of the strings or from plucking."It's the only one in the world, so I don't even have a teacher. And that's a shame!" she joked.

Skovmand also plays the hydraulophone, a type of underwater organ.

"We want to show that the impossible is possible, to discover new elements with live music," says Karlsson.

The band spends the entire performance underwater, surfacing regularly as part of the choreography to take breaths of air.

Ahead of the recent Aarhus concert, the ensemble spent almost six hours in the tanks one afternoon to prepare for that night's 50-minute performance.

The water is kept at 37 degrees Celsius (98.6 Fahrenheit)."We do some diving training, practicing to hold our breath under water," Bech explains.

She has also developed a special technique to sing under water.

"I can't let the air bubbles get out of my mouth, because they will become bubbles [in the water] and that makes a lot of noise underwater. So, I can only make short notes," she explained.

For Karlsson, making music in water has had a magical effect on him.

"I'm actually not very fond of water personally. I feel claustrophobic in a bathtub. But somehow when I get into this tank and am playing an instrument, I feel calm and really secure," he says.

Between Music is currently performing AquaSonic across Europe. After a world premiere in Rotterdam last year, the band is now touring Denmark, and will take part in the International Diaghilev Festival in Perm, Russia in May.