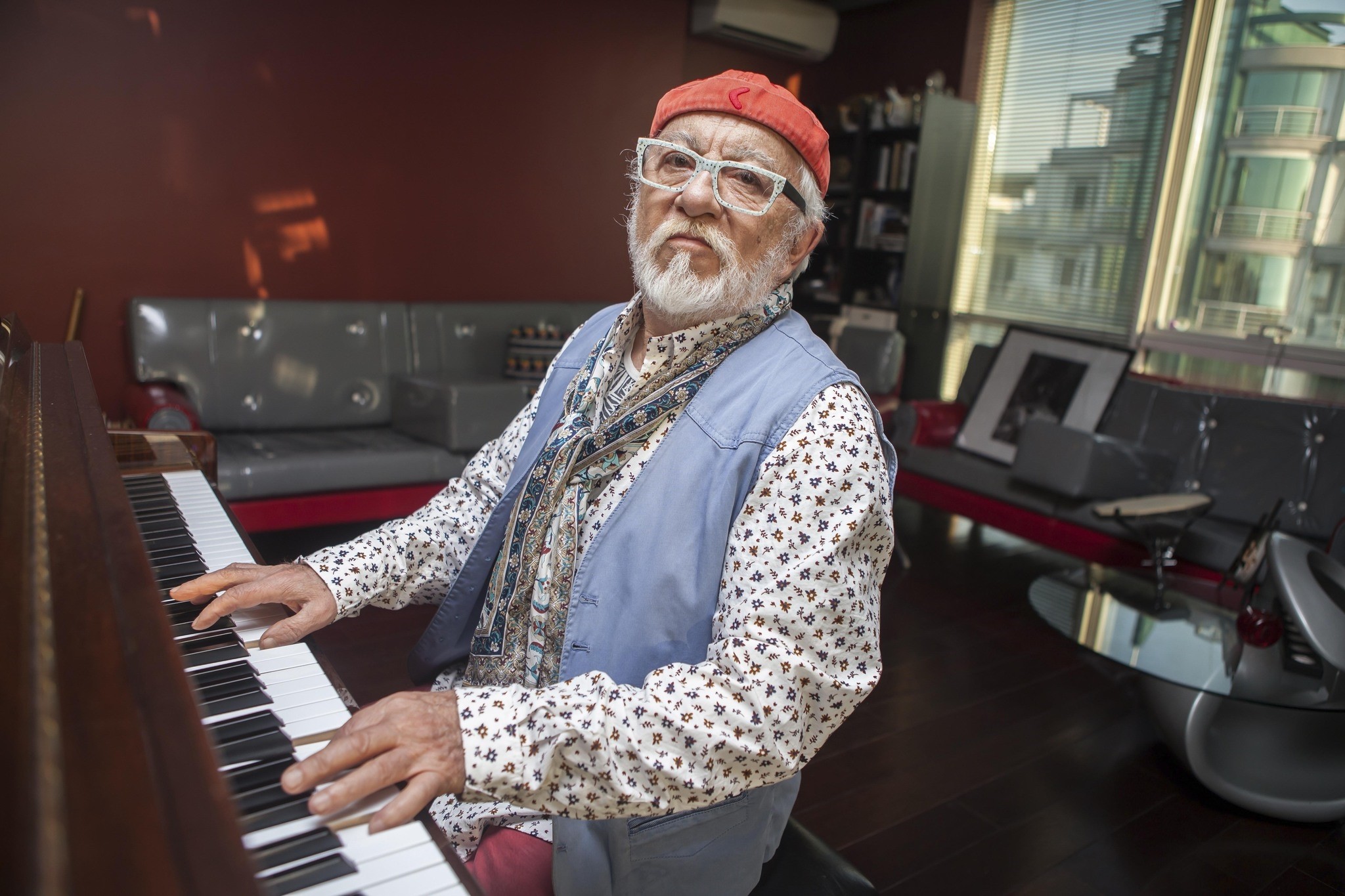 Stressing that jazz music must be more popular and democratic, Turkish jazz percussion master Okay Temiz says jazz is a musical genre that can welcome others into a melting pot

Famous Turkish jazz percussion master Okay Temiz talked to Daily Sabah about his musical journey of 60 years before his concert at the Zorlu Performing Arts Center (PSM) in Istanbul. He will perform today with his famous band Oriental Wind. Introducing Anatolian and Turkish melodies to Sweden's jazz scene, Temiz became an unofficial musical ambassador of Turkish music in Sweden, which was the center of jazz music in Europe at the end of the 1970s. He played with famous jazz musicians like trumpeter Don Cherry, who has a deep love for Turkish music. He has performed at 308 festivals and 3,600 concerts, and released six albums. Using Turkish, African, South African, Macedonian and Indian melodies together, he has played a significant role in the emergence of the World Music genre. 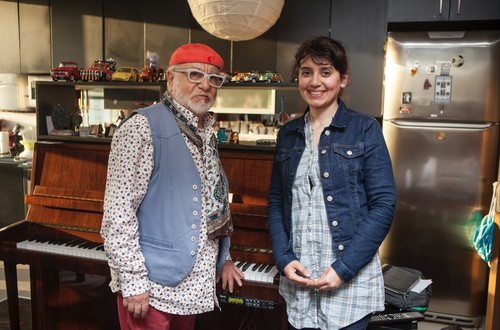 Sweden has not only become familiar with Turkish traditional songs, but also with the musical culture that derived from Anatolian agricultural culture, primarily because Temiz loves to use farming instruments in his music. Every inch of Anatolia from south to north, and from west to east is in Temiz's music. The virtuoso, who has an unusually sensitive ear, has made numerous musical instruments, transforming unexpected objects like tractor exhaust pipes and natural objects like tortoise shells into musical instruments. These instruments have since conquered the hearts of musicians and music lovers from around the world.

From the school to the stage

Temiz is the son of a musician mother, Naciye Temiz, who received her education at the Musical Teacher School (Musiki Muallim Mektebi) that was founded in 1924 and played the ud. She never taught at school but gave a musical education to her son. "My mother was playing ud and leaning the instrument against her womb. I got my first musical vibrations there. This effect came to light afterwards," he said. Temiz says after school he would return home where his mother would play the ud. His mother discovered her son was talented when he would tap out the rhythm of the songs she played. So the musical journey of Temiz started with his mother's suggestion of registering at the Ankara State Conservatory. 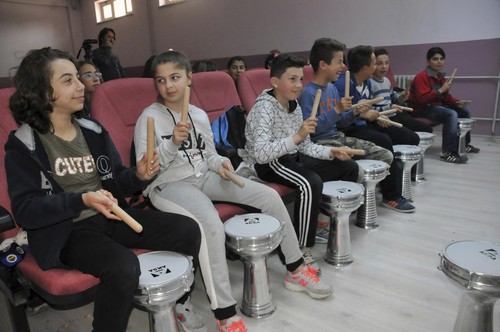 He left the conservatory because of the imposition of Western classical music and the ban on "dance music" in school. "They were brainwashing conservatory people back then with classical Western music. Classical music derived from folk music so I left the conservatory and then for 16 years I played dance music in hotels. I learned lots of things," he said. His father proposed he register at the Tophane Art School so he could be a reserve officer during his military service. It was during his service that he learned to make things like faucet knobs and coffee pot moulds. "I didn't want to do what they ordered, but I wanted to make some musical instruments with my knowledge," he says. He made the screws of his drum circle. After years of practice, he used this knowledge to make different kinds of instruments like the Magic Pyramid, which now has an electronic version, and different kind of percussions like giant copper darbukas that he calls "dümbuka." He also makes percussions instruments like a tortoise shell. He even made a musical workshop with tractors in Sweden.

Sweden, the jazz center of Europe

In 1967, he went to Sweden and started a new journey. He met with American jazz trumpeter Don Cherry. They gave concerts and made albums together. And then bassist Johnny Dyani joined the group. He also played with famous jazz musicians like Dexter Gordon, George Russell and Clark Terry.

Explaining why Sweden became a jazz center in Europe, Temiz said it was a state policy. He said a lot of Swedish women, like those in Finland, the Netherlands, France and Germany, preferred to have a child with foreign musicians as they thought their children would be more talented. Temiz says thanks to the marriages between Swedish women and foreign musicians as well as the children they had together, Swedish music became more varied and expanded and the country's musical footprint increased.

"Although Sweden is a cold country, there were a lot of musicians from Senegal, Burkina Faso and many other countries because the department of cultural centers under the Ministry of Culture sponsored them. When you get used to the weather, there is no difficulty," he said. This is because the technology and infrastructure of the country has been established in compliance with climate conditions. In Sweden, he has played with many musicians that come from different countries over a 30-year career with support from the Ministry of Culture. He has brought many talented Turkish artists to Sweden like violinist Salih Baysal, ney performers Aka Gündüz and Hacı Tekbilek, clarinetist Saffet Gündeğer and zourna performer Binali Selman, just some of the Turkish musicians that Temiz has played with. He founded the music band "Sevda" in 1972 with Salih Baysal, Muvaffak Falay (on trumpet and piano), Bernt Rosengren (tenor), Günnar Bergsten (bariton), Uvve Gustafsson (bass) and himself on on darbuka. Sevda was the first group to take monetary aid from the Swedish state. In 1974, he founded "Oriental Wind," which became famous worldwide.

'Jazz festivals need to be popularized'

Jazz is seen as a musical genre that is now fashionable among the elite. But jazz music was born as protest music by African-Americans whose ancestors worked as slaves. After more than 4,000 slaves migrated or were freed in New Orleans in 1809, a new black culture emerged. Jazz music was born in 1895 as a fruit of this change. In the 1920s, jazz started to become popular, but was marginalized by opposition from white Americans. Jazz was the voice of Africa not wanting to forget its history in slavery. American poet, musician and cultural critic Stanley Crouch says, "jazz predicted the civil rights movement more than any other art in America." He says "using their celebrity and music, musicians promoted racial equality and social justice."

Okay Temiz underlines that we should not forget the origins of jazz music. Temiz says jazz music is now more popular in Turkey, but this popularity is limited to cities. He says tickets should be cheaper so that everybody can afford them. He spoke about how musical organizations can make jazz more popular: "It is not good that jazz is only played in metropolises. If a group comes here, it must go to other cities in Anatolia. Organizations should consider students when they determine a price policy. I know that Dollar Brand, who took the name of Abdullah Ibrahim when he became Muslim, always asks about the price of the ticket. If it is not an affordable price, he says he will not perform. Santana plays in Sweden at a very affordable price, but when he comes to Turkey, it is so expensive that even we can't go to his concerts."

Temiz stressed that music is his life and jazz is the kind of music he can adapt his life to and sees it as a way of thinking. "Jazz is my way of living. There is a lot of freedom in it. I do something. When I get bored of it, I do another thing. The discipline of schools is abhorrent to me," he says. Being a musical genre that is open to all kind of fusions with other musical genres, jazz is Temiz's primary musical love. He says rhythm is a very important element in music. He said when he was in India, Indian musicians taught him that rhythm is the mother, because it is productive. He thinks the use of rhythm should be prominent in Turkish music as well. He says Turkish popular music prioritizes lyrics over composition. The lyrics are generally based on human love, but there can be other themes too, like "love of nature." He says he has songs about nature and has done numerous projects about nature and women rights.

The rhythm virtuoso continues to give rhythm classes to middle school students in Yalova. He also gives lessons at his place, Rhythm Atelier in Kuledibi, Galata to music lovers of every age between September and May. In his atelier, there are different kinds of percussion instruments including the ones is created. His classes are limited to 20 students. Temiz says rhythm classes improve memory skills, concentration, and balance, and enhance the ability to cooperate with others. So rhythm lessons help children who have concentration problems and helps older people prevent Alzheimer's. Temiz also organizes special classes for companies that want their workers to communicate better.