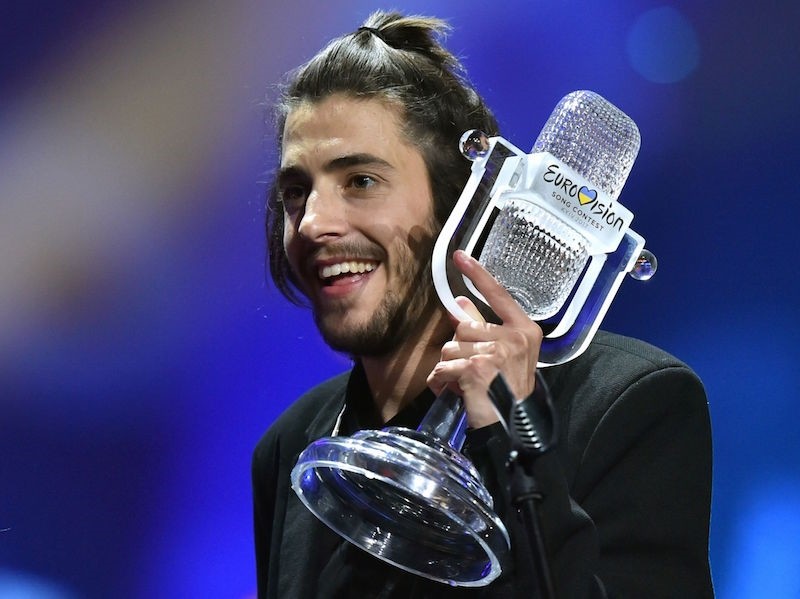 Portuguese singer representing Portugal with the song ,Amar Pelos Dios,, known as Salvador Sobral, holds the trophy as he celebrates on stage after winning the final of the 62nd annual Eurovision Song Contest. AFP Photo
by May 14, 2017 12:00 am

"When we are very good, we're the best of the best. Congratulations Salvador Sobral," President Marcelo Rebelo de Sousa wrote in a message to the 27-year-old crooner, who suffers from a serious heart condition.

The singer was scheduled to arrive at Lisbon airport later in the day accompanied by his older sister Luisa Sobral, who wrote his winning song and is also a successful singer.

"A page of history has been written in Portuguese this evening at Eurovision. Bravo Salvador! Bravo Portugal," Prime Minister Antonio Costa tweeted.

The singer stirred the professional judges and the public in the 60-year-old contest with a melancholic rendering of "Amar Pelos Dois" (For the Both of Us), sung in his native tongue rather than English which is unusual for Eurovision which draws around 200 million television viewers.

His decision to forgo the elaborate choreography and heavy dance tempos favoured by most contestants had made Sobral, a fan of trumpeter Chet Baker, a long shot to win.

Sobral's heart condition means he cannot go anywhere for more than two weeks without his medicine, and he did not attend earlier rehearsals in Kiev because of health worries.

But he plays down his heart ailment, even though he is still waiting for a transplant.

"The disease is a small problem, really, certainly the only one I have in my life."

The singer hailed his win as a "victory for music".

"This is a vote for people who actually mean something with their music," he said following his victory in Ukraine on Saturday night.

"Music is not fireworks, music is feeling. So let's try to do this and bring music back," he added.

Thrust to fame in 2009 with the Portuguese television show "Idolos", the country's equivalent of "American Idol", Sobral struggled with the sudden media exposure, even halting his singing career for a while.

Eight years later, and following a spell of heavy drug use, Sobral captured the hearts of scores of fans with a victory that surprised many, even if it was predicted by bookmakers.

Hundreds of Portuguese and fans around the world used the hashtag #Salvador or #Salvadorable, expressing admiration for the "simple" and "talented" singer.

Before the end of the competition, Brazilian singer Caetano Veloso had said Sobral deserved to win because he was simply "too good".

The Portuguese press amplified the singer's victory in his country, which has never managed to improve on its 1996 sixth place ranking.

On an otherwise thin news day, Sobral made a front-page splash Sunday alongside a visit by Pope Francis to the Catholic site Fatima that drew a crowd of 500,000 and the Benfica Lisbonne football club's 36th victory in the country's national championship.

As Benfica fans celebrated the team's fourth consecutive win Saturday night, the jubilant scenes were briefly interrupted by Sobral singing on the gigantic speakers set up in the heart of Lisbon, the Eurovision champion's home town.