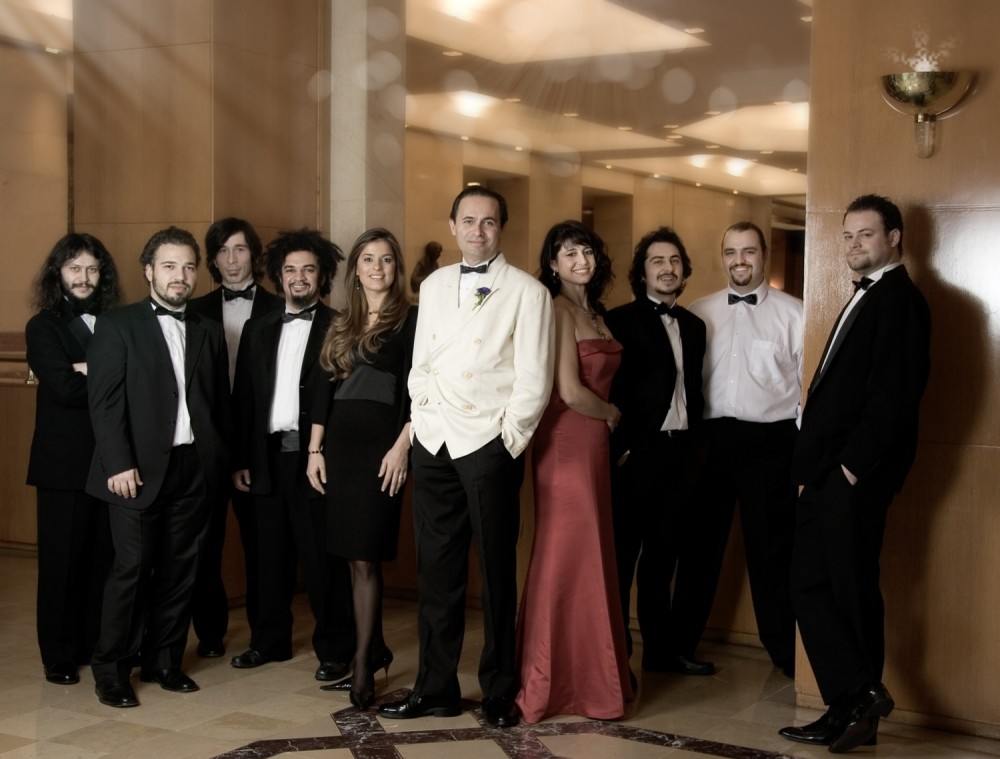 Entertaining music lovers with its Midnight Sessions and Bomontiada Avlu performances, Babylon is now ready to offer its brand-new season

Abolishing geographical, political and cultural borders with their music, A-WA, will be on Babylon's stage for the first time with their colorful stage shows and energetic music on Sept. 23-24. The band members are three Israeli sisters, Tair, Liron and Tagel Haim, and they combine the verbal history of Yemeni women with electronic dance music. With the support of Tomer Yosef, a producer known for his Balkan Beat Box project, A-WA produced their first album "Habib Galbi," offering very polyphonic musical experiences that combines groove and electronic sounds.

American musician, songwriter and multi-instrumentalist Hanni El Khatib will be performing his new album "Savaga Times" at Babylon on Tuesday, Oct. 17. El Khatib from San Francisco rose to fame with "Head in the Dirt" produced by Black Keys' Dan Auerbach in his 2013 album "Will the Guns Come Out." His latest album released in March, "Savage Times" offers musical experiences that mixes garange rock and punk genres and blues melodies.

Impressing with her humble lyrics, Marian Hill will be performing for the first time in Turkey on Saturday, Oct. 21. Jeremy Lloyd and Samantha Gongol's project, Marian Hill harmonizes blues, acoustic and digital sound with classical and modern sounds. After the success of their single "One Time," the duo continued with their album "One Act" and they swept radio charts with "Down."

Canadian folk trio Timber Timbre, created by Taylor Kirk, will be on Babylon's stage for the first time on Wednesday, Oct. 4 as part of the Garanti Caz Yeşili concerts. With Taylor Kirk's poetic vocals and folk, blues and groove rhythms, Timber Timbre has released seven albums and they continue enjoying success with their latest album, "Sincerely, Future Pollution." The band blends many tunes and melodies with "Creep On Creepin On" borrowing from 1950s doo-wop and 1960s folk, while "Hot Dreams" takes us back to the 1970s.

Dubioza Kolektiv, harmonizing the unique atmosphere of the Balkans with their traditional music, will be welcoming their fans for the first time at Babylon on Saturday, Oct. 28. The band from Bosnia and Herzegovina combines ska, punk, and reggae, electronic and hip-hop rhythms with Balkan melodies. The band, which touches on political global issues such as the difficulties of being an immigrant, performs their songs in English, Spanish along with other languages.

The music will continue until the late hours at Babylon with Midnight Session Music hosting Eli & Fur on Saturday, Sept. 23. Drawing attention with their first recording, "You're So High," Eli & Fur is a breath of fresh air with their stage performances in the electronic music scene. Performing at prestigious stages including Boiler Room, Creamfields, Dimensions and festivals such as Coachella and Glastonbury, the duo has shared the same stage with Rudimental, Maceo Plex, Carl Cox and Jimmy Edgar.

Kabus Kerim from cult bands, who left their mark on music history, Cartel and Karakan will be at the DJ booth at Midnight Session Music after BaBa Zula on Friday, Oct. 20. With his slogan, "From the old to the new, always forward" Kabus Kerim keeps the classical hip-hop culture alive with his DJ sets.

Many more names from local and foreign stages will perform at Babylon this year including Nouvelle Vague, who will be performing for their fans for two nights in a row at Babylon on Sept. 21-22. Born from the partnership of French musicians Marc Collin and Olivier Libaux, Nouvelle Vague combines the disobedient style of punk rock with the intellectual depths of new wave and the cheerfulness and dance of Bossa Nova. Bringing together extraordinary vocalist including Camielle, Phoebe Killder, Nadeah, Melanie Pain, Liset Alea, the band performs cover songs of many cult bands including Joy Division, The Clash, Depeche Mode and Blondie.

A modern vocalist of Turkey, Ceylan Ertem will take the stage at Babylon with her extensive repertoire on Wednesday, Sept. 27. Moving to Istanbul for her vocal and musicology trainings, Ertem's first solo album, "Soluk" ("Breath") was released in 2010 and her 2012 release, "Ütopyalar Güzeldir" ("Utopias are Pretty") became one of the best albums in recent years. Her latest album recorded in the province of Gaziantep, "Yine de Amin" ("Still Amen") was released in February and the singer and songwriter continues her Turkey and foreign concerts.

Young artist Deniz Tekin will also be the guest of Babylon on Thursday, Sept. 28. Reaching many with her videos published on YouTube, Tekin is considered an up-and-coming star.

Ayhan Sicimoğlu & Latin All Stars is at Babylon with their tropical rhythms and Latin tunes on Friday, Sept. 29. Bolero, salsa, cha-cha tunes and special surprises await music lovers on this night where not only Latin tunes but also Turkish melodies will fill the air.

One of the biggest names of the rock music scene in Turkey, Redd will perform for their fans at Babylon on Thursday, Oct. 5. Releasing their first album, "50/50" in 2005, Redd continues their career with "Kirli Suyunda Parıltılar," ("Glitters in Your Muddy Waters"), "Plastik Çiçekler ve Böcek" ("Plastic Flowers and an Insect"), "Gecenin Fişi Yok" ("The Night has No Plugs"), "21" and "Hayat Kaçık Bir Uykudur" ("Life is a Lost Sleep"). They have secured their place in the music world with their latest album, "Mükemmel Boşluk" ("Perfect Emptiness") and the band also volunteers for various social responsibility and awareness projects.

Icelander musician Soley will be on Babylon's stage on Wednesday, Oct. 11 as part of the Garanti Caz Yeşili concerts after recently releasing her new album, "Endless Summer." Soley, known from Indie music bands Seabear and Sing Fang, is inspired by Stefansdottir, Sigur Ros and Mum. Telling her own stories in her first solo album "Theatre Island," Soley continues her career with electro-pop tunes.

Gaye Su Akyol will be at Babylon to perform for her fans on Friday, Oct. 13, with her Eastern-Western synthesis. After her first LP, "Develerle Yaşıyorum" ("I Live with Camels"), she released "Hologram İmparatorluğu" ("Hologram Empire") last year and accompanies local music instruments she added to the trio of bass, drum and guitar.

Büyük Ev Ablukada will be at Babylon once more with their "Fırtınayt" performance after their "Akustik" ("Acoustic") and "Full Faça" ("Full Face") on Sept. 14. The band's new electronic song with the single "Hayaletler" ("Ghosts"), released from "Olmadı Kaçarız" ("Worst Comes to Worst, We'll Run Away"), is very popular at the moment.

Applauded at their concerts at New York Carnegie Hall and North Sea Jazz Festival, will be at Babylon stage with their concept "Karsu Music" blending jazz, blues, soul, funk and Turkish Music. Singer, songwriter, composer and arranger along with his piano playing, Karsu gives concerts both in Turkey and abroad.

Cult musician and guitarist Marc Ribot, who has worked with many famous musicians including John Zorn, The Lounge Lizards, Arto Lindsay, Medeski, Martin and Wood, and Elvis Costello, will be back on Babylon's stage again after his first concert back in 2007 together with The Young Philadelphians on Thursday, Sept. 19.

BaBa ZuLa, one of the most unique bands in Turkish music history, will be at Babylon on Friday, Oct. 20. Praised by many acclaimed publications including The Guardian and Record Collector, the band released their latest album "XX" in January in which they describe their 20-year musical journey. Rising on Europe's world music chart list in February, "XX" also has a dub arrangement with names including Mad Professor, Dr. Das, Sly & Robie and Dirtmusic.

Sevdalize, whose music cannot be classified into any genre, will be at Babylon on Wednesday, Nov. 1 with her touching and melancholic voice offering a different musical experience. Known for electronic, trip-hop, grime and avant-garde productions, the multidisciplinary Iranian artist impresses many with her lyrics. After her "The Suspended Kid" and "Children of Silk" EPs, she released her album "ISON," which includes questioning and philosophical tunes.

Tickets for these events can be purchased through Mobilet for iOS and Android and online at www.mobilet.com.