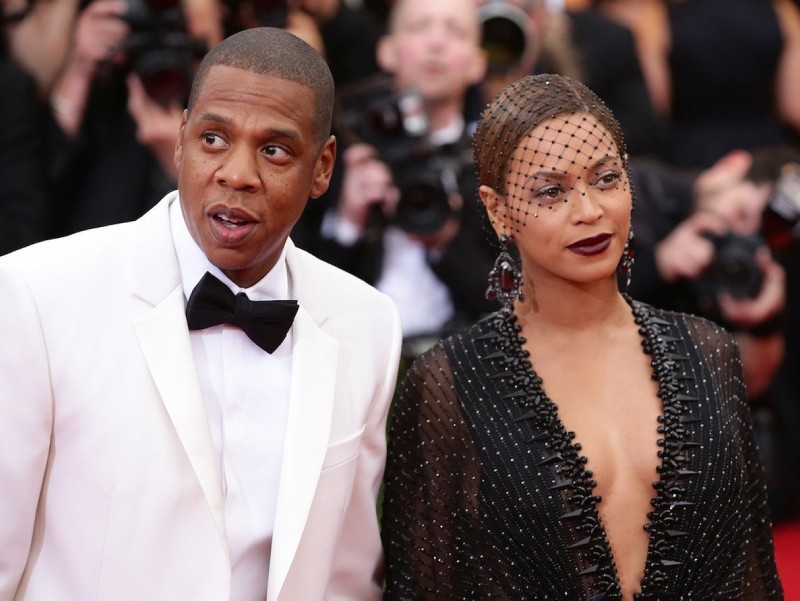 Music's most famous couple Beyonce and Jay-Z pulled a surprise by releasing a joint album, a long-rumored collaboration that celebrates their marital passion and black identity.

The pop diva and hip-hop superstar announced the album, "Everything is Love," from the stage in London as they wrapped up the British leg that opened a global tour.

The album came out late Saturday exclusively on Jay-Z's fledgling Tidal streaming service and is not available on Spotify -- a far larger platform, which Beyonce disses on the album in a string of F-bombs.

The couple also put out an elaborately choreographed video that takes place inside the Louvre museum in Paris for a song off the album, "Apeshit."

The video opens with the couple standing regally in front of the "Mona Lisa" -- Jay-Z in a light green double-breasted suit, Beyonce in a lavender pantsuit -- and features a squad of scantily clad dancers moving sensually in front of Jacques Louis David's "The Coronation of Napoleon."

Driven by warm, sultry soul with a largely hip-hop cadence, "Everything is Love" marries the styles of the two artists but is more consistent with the recent direction of Jay-Z.

The album shatters any lingering innocence from the early days of Beyonce, with the singer of "Say My Name" and "Single Ladies (Put a Ring On It)" generous in the details of her sex life with Jay-Z.

An even more public marriage

The two stars have recorded together previously, notably on the Beyonce-led single "Drunk in Love," but the album comes after an especially public window into their marriage.

Beyonce on her last solo album "Lemonade" in 2016 revealed infidelity on the part of Jay-Z, who a year later asked forgiveness on his own album "4:44."

This year, as the title of "Everything is Love" implies, their relationship is apparently swell. On her very first lyrics, Beyonce beckons to her husband, "Let's make love in the summertime."

On the final track, the joyously brassy "Lovehappy," the two acknowledge past pain but also their efforts to reconcile.

"We're flawed / But we're still perfect for each other," Beyonce sings.

As two of the most prominent African Americans in pop culture Jay-Z and Beyonce have played increasingly visible political roles, from campaigning for former president Barack Obama to championing the Black Lives Matter movement.

"Everything is Love" offers a paean to African American identity in "Black Effect," which opens in Beyonce fashion with a monologue about self-love before a haunting soul sample.

Jay-Z on the song name-checks Trayvon Martin, the 17-year-old African American shot dead in 2012 by a neighborhood watchman in a Florida gated community, and raps, in a twist on performers' rote calls for crowd gesticulation, "Get your hands up high like a false arrest."

Saying no to Super Bowl

Elsewhere on the album Jay-Z appears to confirm a report that he turned down an offer by the National Football League to perform at this year's Super Bowl, the most-watched event on U.S. television, with Justin Timberlake ultimately playing American football's title match.

Jay-Z is an outspoken supporter of Colin Kaepernick, the now-unemployed quarterback whose kneeling protest against racial injustice during the national anthem has triggered angry denunciations by President Donald Trump.

"Every night we in the endzone / Tell the NFL we in stadiums, too," he raps, likely referring to the racial dynamics in American football where almost entirely white owners employ mostly African American players.

The rapper, also known by the nickname Hov, takes aim more directly at Trump on "Salud!", a song with Beyonce that inexplicably did not make the nine-track album but was released simultaneously.

Making no apologies for his success, Jay-Z raps, "Your president tweeting about Hov like he knows us / My road to the top was to take what you owe us."