Bulgaria's famed all-female folk choir back with a modern twist 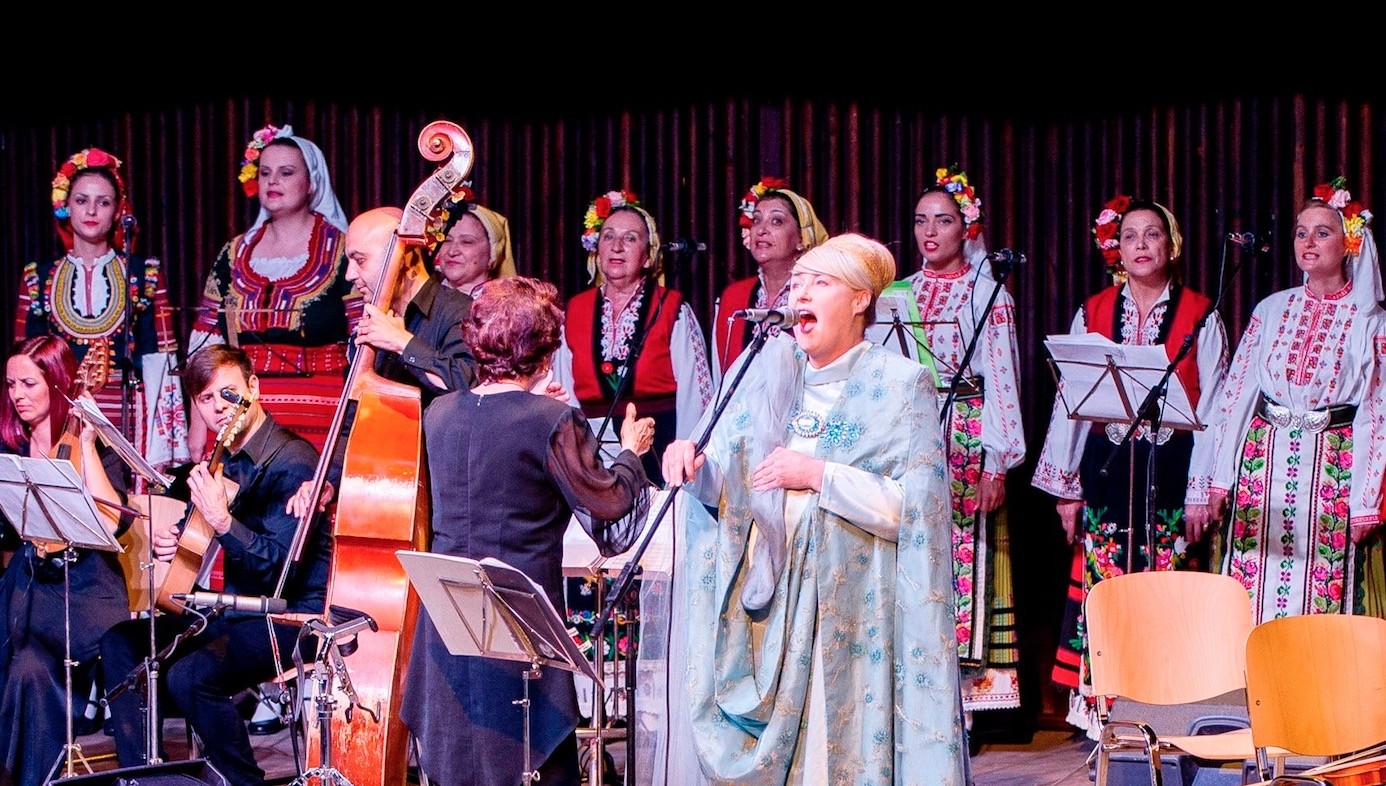 Australian-born singer Lisa Gerrard performs with Bulgaria's Grammy-winning folk choir ,The Mystery of the Bulgarian Voices, during a concert in Varna on June 12.
by Aug 13, 2018 12:00 am

Thirty years ago, an all-female folk choir set up in Bulgaria became the darling of Western audiences with its tradition-steeped a cappella singing, before the fall of communism threatened its survival.

With fans like George Harrison, David Bowie and Kate Bush, The Mystery Of The Bulgarian Voices ensemble conquered the international charts during the Cold War at a time when world music was beginning to gain popularity.

Now the Grammy-winning choir from Sofia is back, with their embroidered blouses and floral hair styles plus a contemporary twist, having teamed up with Australian-born Lisa Gerrard of the music group, Dead Can Dance.

The choir's new album, which is its first studio production in two decades, in collaboration with Gerrard, was released in May in Bulgaria and deemed by Rolling Stone magazine's online edition as among the "10 New Albums to Stream Now."

Gerrard said her task on the album, entitled "BooCheeMish" was "to bring them, the choir, into the moment without corrupting their tradition".

A longtime fan, Gerrard recalled her first encounter with the choir's music 38 years ago, telling Agence France-Presse (AFP): "There was something unique and full of light that these women were doing, which is what I wanted from the work."

The choir's signature vocal style is made up of powerful layered polyphonic harmonies, created by different combinations of voices, a sound once described as something between a call to prayer and The Beach Boys.

"This genuine open singing that comes from the throat, the larynx, is not something that you can teach, you must be born with this," long standing choirmaster Dora Hristova said.

Many of the two dozen women, aged 20 to 70, in the choir have inherited their singing skills from their parents.

"My mother Nadezhda Hvojneva was a soloist for the choir for 40 years, and we used to perform side by side," singer Elichka Krastanova, 50, told AFP.

Originally their songs would have been sung in rural parts of Bulgaria during weddings or on religious holidays and as people worked in the fields.

In the 1950s, encouraged by the communist regime which propagated working-class and peasant culture, composers did more popular arrangements of these traditional songs and the best performers were drafted into state choirs.

And in 1952, the all-women choir was founded as The State Radio and Television Female Vocal Choir.

It remained largely unknown abroad, despite a Swiss ethnomusicologist, Marcel Cellier, in 1975 releasing an album featuring them and other Bulgarian folk music compositions entitled "Le Mystere des Voix Bulgares" ("The Mystery of the Bulgarian Voices").

It was not until 1986 that the choir rose to international fame, when the album was edited and re-issued by the British cult record label 4AD, which has released albums by bands such as the Cocteau Twins and Bauhaus.

Their second album, released in 1987, went on to win a Grammy Award in 1990, and the Bulgarian women, in their kaleidoscopic attire, started touring the world to sell-out crowds, releasing two more albums in 1989 and 1998.

Captivated by the purity and originality of their sound, fans included David Bowie and his wife Iman, who had one of the choir's songs "Kalimankou Denkou" played during their 1992 wedding.

But the end of communism brought turbulent times for the choir, leading to their sacking by the state broadcaster in 1997. The singers were forced to take other jobs, most as music teachers, to make ends meet.

"We survived only thanks to the many invitations for concerts that came from abroad and the necessity to keep up our level and not disappoint the audience," choir master Hristova said.

But there was no money for new songs and arrangements, let alone recordings.

Finally, the independent Schubert Music Publishing company provided the means to record their new album, described by producer Boyana Bounkova as "a bolder and quite experimental mix of styles."