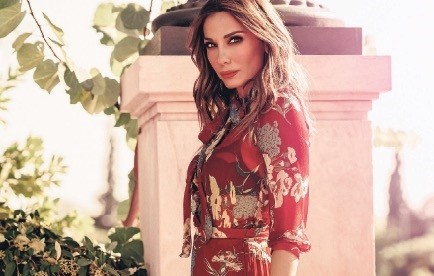 One of the most popular voices of Greece, Despina Vandi, will perform for fans during the 7th International Clarinet Festival on Sept. 17.

With high album sales and top rankings on international music charts, award-winning musician Despina Vandi will perform on Harbiye Cemil Topuzlu Open Air stage. Her songs have been covered by numerous singers, including Mustafa Sandal's cover of her song "Anaveis Foties" as "Aşka Yürek Gerek" (You Need a Heart for Love). Likewise, her song "Apapa" was redone by Ziynet Sali as "Ba-Ba," while her "Thelo Na Se Do" was remixed by Yaşar and Yıldız Usmanova as "I Used to Love You."

The artist won the Best-Selling Greek Artist title at the 2001 World Music Awards and went down in history. Vandi was born in 1969 in Tübingen, Germany and grew up in Greece. She started her music career in the 1990s. Her albums went platinum in Greece, and she has become an international star with 25 awards and hit singles. Her single "Gia" peaked on U.S. Billboard Hot Dance Airplay and carried her fame worldwide.

Vandi received an award from Virgin Megastores' director in London in 2000 for her CD "Ipofero," which was the best-selling CD of all time in Greece. A year later, she became the first Greek artist to receive the Best-Selling Greek Artist award at the World Music Awards in Monte Carlo for her album "Gia," which went platinum within 11 days of being released. Vandi was awarded in Portugal for the same album and received numerous awards in Russia with her following album "Opa Opa."

After the success of her albums, she gave sold-out concerts in Europe, the U.S. and Australia and made collaborations with various DJs and producers, such as Armand Van Helden, Milk & Sugar, Nick Skitz and Roger Sanchez. She sang "Destiny" on the album "Sehnsucht" with German electronic music producer Schiller.

Vandi was a guest actress on "Dio Kseni," one of the most popular prime-time TV shows in Greece in 1999. She was the presenter for Greece's finals for the Eurovision Song Contests in 2013 and 2014 with Giorgos Kapoutzidis. In 2014 and 2015, she was one of the coaches of "The Voice of Greece" and became first in the first year. One year later, she was the guest of a popular music-fashion event "MadWalk" and a jury member for "Rising Star of Greece."

She is followed as a fashion icon by the media and her fans. Vandi created her own designs in 2016. She also played a role in "Mamma Mia" and performed to sold-out audiences for the show.