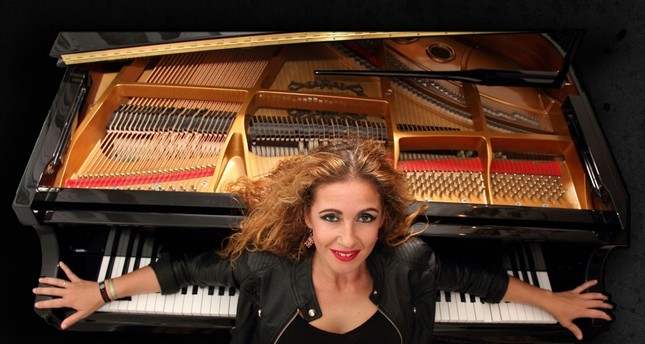 A young and talented pianist, singer and composer of Flamenco/fusion, Laura de Los Angeles is ready to mesmerize an Antalya audience on Sept. 1 at the opening concert for the 19th Antalya Piano Festival

One of Spain's leading Flamenco artists, Laura de Los Angeles will perform in Turkey for the first time at the opening concert of the 19th International Antalya Piano Festival.

Her performance will be accompanied by Flamenco dancers and eight other musicians for the concert at Antalya Cultural Center's Aspendos Hall on Sept. 1.

The multiple award-winning artist has gone on a number of tours in Europe and South America, carrying her music and fame beyond her home country of Spain.

The accomplished musician had deals with the recording label Entredos and Spain's National Flamenco Ballet, in 2013 and 2014, respectively.

She also won recognition for the video clips of her second album "Mi Nueva Esperanza" and won acclaim at the 2016-2017 Sevilla Festival. She continues to perform in different cities around the world. Enriching her vocal performance with piano and dance, Laura de Los Angeles offers an unforgettable musical performance.

Daily Sabah conducted an interview with the famous musician about her career, inspirations and the upcoming Antalya concert.

Los Angeles is known to be the first woman pianist and singer in the history of Flamenco. She is proud of it, though there is a big responsibility on her shoulders.

"Being the first woman pianist and singer in Flamenco history took me by surprise and it took a long time to sink in. I feel very honored and it feels like a big responsibility, however I am looking forward to the day when women stop taking the title of "first in..." and we start enjoying real equality, the day when women will be part of every sector of society and professions, without making any distinction between sexes, but just getting recognition for our work," she said. She was surrounded by music since childhood. "At home music has been always around and was a big part of my childhood, especially Flamenco. Although, no one at home was really a professional musician before me, they have always felt attracted by many art forms. I have been very fortunate to grow up surrounded by big names in Flamenco, and that made me see music not only as something

beautiful, but also as a fundamental way of expressing myself and soon I realized that I could make a living with it," she says about her childhood memories.

Laura de Los Angeles first learned percussion, and when she was eight-years-old she started to learn her first notes as self-taught on the piano. As she started to enjoy the instrument, she started attending the music conservatory in Sevilla, where she was taught techniques and theory. When she felt confident enough, she started composing her first pieces and at age 15, she wrote her first Bulerias. Since then she has kept on writing songs with her typical and characteristic touch and essence.

Undoubtedly, the secret to her success is long hours practicing. She explains her practice routine: "I try to play every day for many hours, although it is not always possible, as it depends on my family obligations, traveling, concerts, etc. However, there are many other ways of learning something new, like watching videos of other performers, listening to music of many styles, going to shows where I can get new inspiration. The most important thing for me is to be always be surrounded by music and art in general."

Like many other musicians, Los Angeles has her own sources of inspirations. She listens to other musicians, and is inspired one way or another. "My essence is clearly Flamenco music, but I get inspired by many other styles. There are many artists who have been very important throughout my career, like Bebo Valdes, Michel Camilo, Dorantes, Paco de Lucia, Enrique Morente, Bill Evans and Mozart," she noted.

As she has specialized in Flamenco, she has been greatly influenced by great flamenco musician and dancer Manuel Soler. "There are many important flamenco artists to me, but the one who has had a bigger influence on me as an artists, has to be flamenco dancer and percussionist Manuel Soler, with whom I had the chance of growing up with. Part of my style and way of playing in a percussive way comes from learning with him," she explained.

Laura de Los Angeles is quite excited for her opening concert at the 19th Antalya Piano Festival. "I am very much looking forward to arriving in the country to share my music and my show with your audience and make them have a great time. It is a dream come true to travel to a wonderful country as Turkey, to which I always feel so much respect for and feel so attracted by its history, art, music and culture. It will be one of the most important concerts of my career and a true honor to be the one opening the international piano festival of Antalya," she said, continuing to giving further information about the content of the concert: "We have prepared a new repertoire especially for this great festival, where of course, the essence of piano flamenco and my voice will be the main points. But I will also share with the audience moments when they will enjoy mixing with different music styles. It will be a very enthusiastic show with a grand piano as the main character, but surrounded by other amazing musicians and flamenco dancers. It will be a concert full of surprises," she said enthusiastically.

The accomplished musician is also into Turkish music: "Although I cannot call myself an expert on Turkish music, I really love it, and since I got offered the opportunity of playing there I have been listening to Turkish music a lot recently," she said, "I have met some Turkish musicians who have been mixing their style with flamenco, which has a lot of similarities. It would be a nice challenge to get together with a Turkish musician and create something amazing. I am sure that I will get inspired there."

Share on Facebook Share on Twitter
Previous in Music The Turkish Youth Philharmonic Orchestra (TUGFO), founded and supported... Next in Music The "Queen of Soul" Aretha Franklin was remembered during a nearly...
DAILY SABAH RECOMMENDS