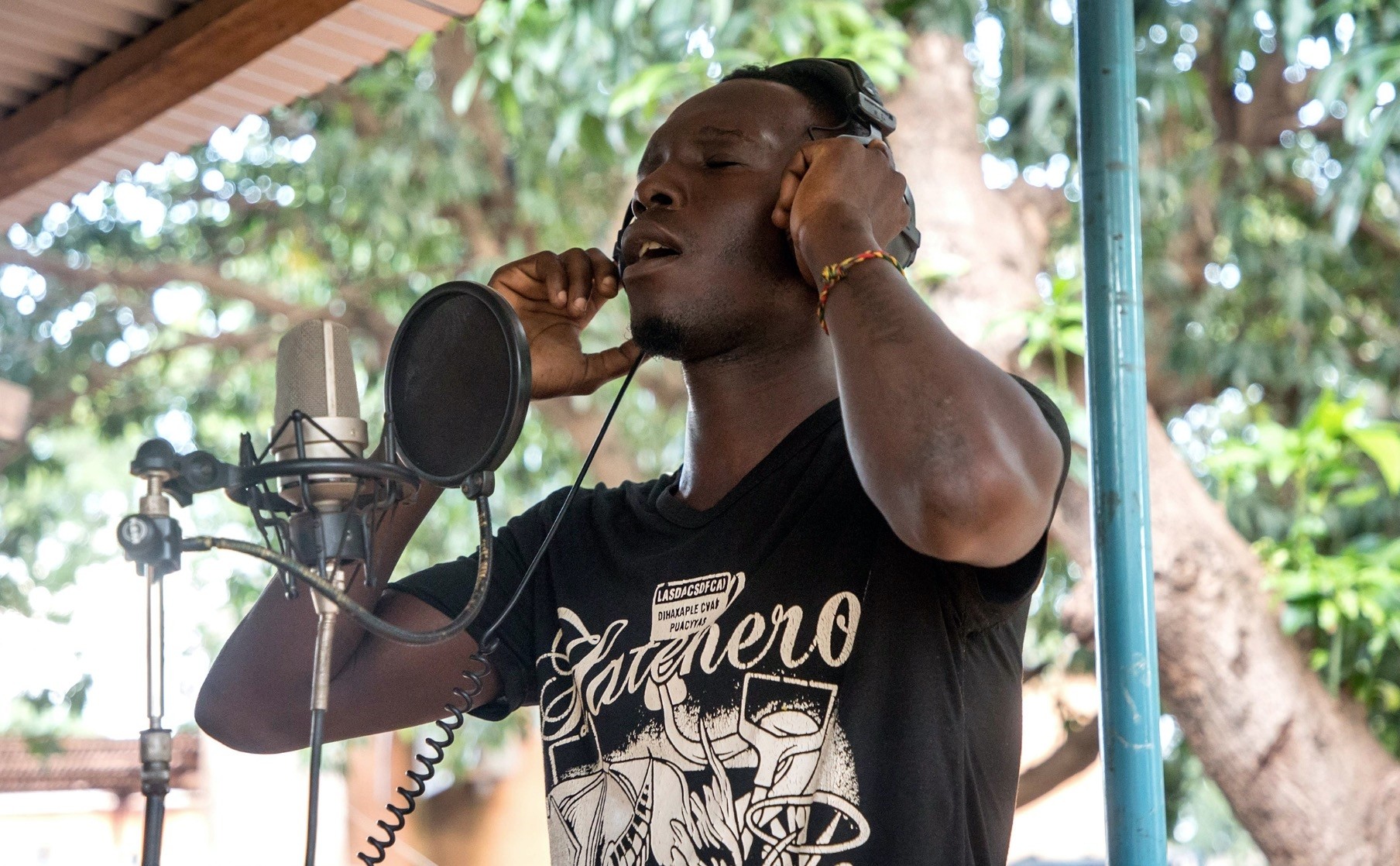 Wearing a black T-shirt, a large pair of headphones clamped over his ears, the young singer croons into a microphone at a simple recording studio inside a prison in Burkina Faso.

Known as Johnyto, the 25-year-old is serving two years for being an accomplice in a robbery at an overcrowded prison known for its abysmal conditions in Bobo-Dioulasso, Burkina's second city.

Here, he is one of 700 inmates, some of whom are looking on curiously as he works the synthesizer, the mixer and the amplifiers.

"School didn't work out because I wanted to make music, but well, that didn't take off... Many things happened before I wound up here," admits the young singer, whose real name is Jonathan Sougue.

"But one day, I hope to become a real star and forget this life."

And in March, Johnyto finally got the break he was looking for when he entered an audition run by Burkinabe reggae star Freeman Tapily who was looking for an inmate who could record an album behind bars. In what could have been dubbed "Prison's Got Talent" or perhaps "X-Factor Behind Bars," four people in his jail vied for first place, and Johnyto, with his mix of rap and ballads, won.

Several months later, Tapily's team came into the prison and set up a basic recording studio where Johnyto spent three days with them recording five songs, shooting a music video and taking a series of publicity shots.

The project is being jointly financed by the Burkinabe Office of Author's Rights and by African Culture, an organization owned by Tapily that invites well-known Burkinabe singers and musicians to perform at concerts inside prisons for free as a way of helping with the inmates' rehabilitation.

"These projects are close to my heart," Tapily told Agence France-Presse (AFP).

He started the initiative in 2010 with a concert performed in front of 1,400 inmates at the MACO Central Prison in the capital, Ouagadougou.

But what he really wants to see is the numbers falling - in a sign that the inmates are completing their sentences, getting out and getting on with normal lives.

"And in terms of rehabilitation, music can do a lot."

Tapily has a lot of confidence that Johnyto can make it as a professional musician. "Me, I make my living from music ... and I think Johnyto's talent is far greater than mine," he told AFP.

"I think he can go beyond rehabilitation - he'll definitely do that - but I think he could even help other people do the same," he said, suggesting the young musician could even hire some of them to work with him.

The album, which is due to be released in December, has songs on it with lyrics in both French and Dioula, a local language also spoken in Ivory Coast and Mali.

And Johnyto has dedicated the main track - "I'm Sorry" - to his mum.

"I didn't know how much you loved me/I'm sorry, yes mama, I'm sorry/I'm sorry to have caused you so much misery," he sings. Once the album is finished, Tapily's team will burn 100 copies that Johnyto can distribute and sell himself, like most Burkinabe musicians do.

Although the prison administration itself doesn't get involved in funding such external activities, it is happy to encourage them and to ensure the events go off as smoothly as possible.

From sewing to stockbreeding

For Pascal Yabre, regional head of prison security, rehabilitation of the inmates is a top priority.

"The aim is to enable those prisoners who have been here once to leave and never come back," he said.

Across this West African nation, prisons are now offering inmates training in a wide range of skills, from gardening to livestock farming, to tailoring, carpentry and soap making.

Activities vary from one place to another, but for now, only a small percentage of prisoners are involved.

"The problem is that we often lack resources, which means we don't manage to put them on at all the prisons," Yabre admits, citing financial difficulties at the prisons' authority.

For Tapily, the funding shortfall is easily explained.

"We are in a poor country where everything is a priority so the state can't allow itself to spend too much on the prisons," he says. "If I was president and had to choose between building a new hospital and a new jail, I would choose a hospital!" BOBO-DIOULASSO / AFP