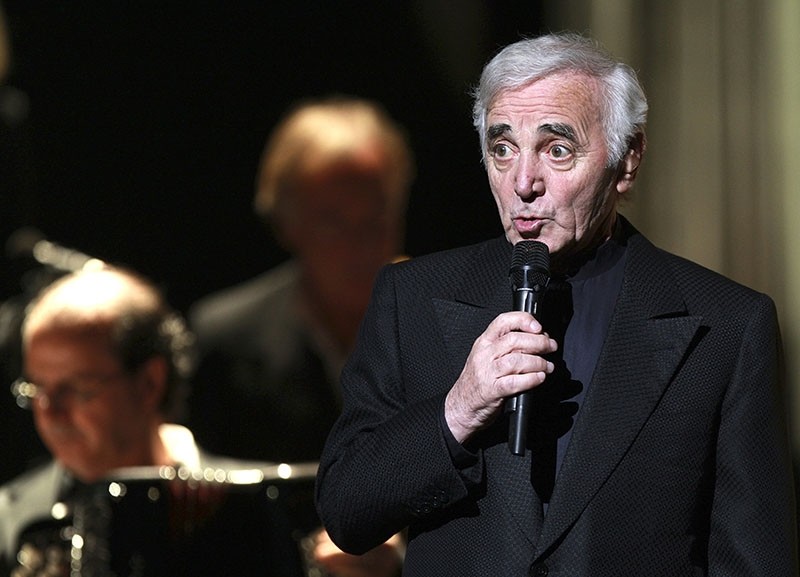 In this Dec.17, 2007 file photo, Charles Aznavour, a French singer of Armenian origin, performs during a concert in Marseille, southern France. (AP Photo)
by Compiled from Wire Services
Oct 01, 2018 12:00 am

Charles Aznavour, the French crooner and actor whose performing career spanned eight decades and who seduced fans around the world with his versatile tenor, lush lyrics and kinetic stage presence, has died. He was 94.

The songwriter, who had just returned from a concert tour of Japan last month, died in his home in Alpilles in southeastern France. He had to cancel several concerts last after breaking his arm in a fall last May but was set to start a new tour in Brussels on October 26.

But as late as Friday the diminutive singer told French television that though his Swedish-born wife wanted him to stop touring, he would happily die on stage.

"I always go forward," said the performer who tried to write a song every day. "There is no backward step with me.

"All I can do is live, and I live on stage. I am happy up there, and you can see that," he added.

In a 2013 interview Aznavour suggested he would sing until the age of 100. "We should leave room for others," he added.

One of France's most recognized faces, Aznavour sang to sold-out concert halls until the end, resorting to a prompter only after having written upwards of 1,000 songs by his own estimate, including the classics "La Boheme" and "Emmenez-moi." He sold more than 180 million records in 80 countries, wrote songs in seven different languages and acted in more than 60 movies in the course of his career.

In the English-speaking world he was often dubbed France's Frank Sinatra, but unlike the American crooner, he wrote his own songs, often breaking taboos about marriage, homosexuality and men talking about their emotions.

Aznavour was born Shahnour Varinag Aznavourian in Paris on May 22, 1924 to Armenian parents who emigrated from the Ottoman Empire and grew up on Paris' Left Bank.

His father was a singer who also worked as a cook and restaurant manager, and his mother was an actress. Aznavour's first public performances were at Armenian dances where his father and older sister Aida sang, and the young Charles danced. His family were heroes of the Resistance against the Nazi occupation of France during World War II, regularly risking death to hide Communist partisans in their tiny Paris apartment.

Aznavour began his career peddling his music to French artists of the 1940s and 1950s such as Edith Piaf, Maurice Chevalier and Charles Trenet.

He discovered his talent for penning songs while performing in cabarets with partner Pierre Roche, with Roche playing the piano and Aznavour singing.

It was after World War Two that Piaf took notice of the duo and took them with her on a tour of the United States and Canada, with Aznavour composing some of her most popular hits.

The French chanteuse took him under her wing. Like her, his fame ultimately reached well outside France: Aznavour was named entertainer of the century in an online poll by CNN and Time magazine in 1999.

But it was his leading role in Francois Truffaut's film "Shoot the Piano Player" in 1960 that catapulted Aznavour to international fame.

Buoyed by its success he took New York's Carnegie Hall by storm in 1963 before touring the world and seeing his songs recorded by stars from Ray Charles to Liza Minnelli and Fred Astaire.

He also performed duets with Sinatra, Elton John, Sting and Celine Dion and his song "She" was re-recorded by Elvis Costello for the British romantic comedy "Notting Hill".

Aznavour was one of the Armenian diaspora's most recognized voices and vocal defenders, including campaigning for Armenian genocide allegations. He became Armenia's ambassador to Switzerland in 2009 and permanent delegate to the United Nations. In 1988, he led humanitarian efforts to help the victims of the earthquake that shattered his parents' homeland.

"Armenia and Armenians are in my heart and in my blood. It was unthinkable that I would do nothing faced by so much misfortune and suffering," he wrote, describing the quake as a turning point in his life.

A father of six, who married three times, he said the "first time I was too young, the second I was too stupid, and the third I married a woman from a different culture and I learned tolerance".

French President Emmanuel Macron was a big fan of Aznavour and sang many of his songs during karaoke nights with friends when he was a student, according to former classmates.

Former French prime minister Manuel Valls was among the first leaders to react to his death, praising "this son of Armenian immigrants who became one of the greatest and most beautiful symbols of French brilliance.

"Adieu and thank you," he tweeted.