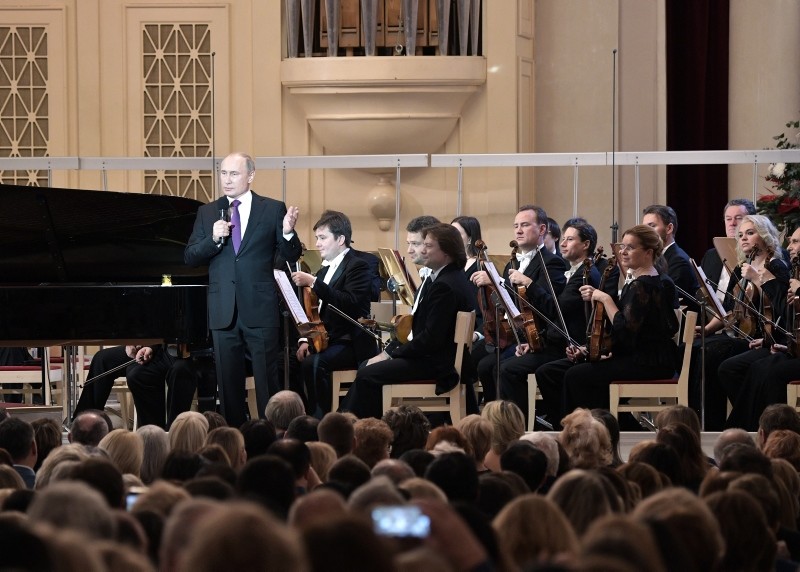 Alarmed by the growing popularity of rap among Russian youth, President Vladimir Putin wants cultural leaders to devise a means of controlling, rather than banning, the popular music.

Putin says "if it is impossible to stop, then we must lead it and direct it."

But Putin said at a St. Petersburg meeting with cultural advisers Saturday that attempts to ban artists from performing will have an adverse effect and bolster their popularity.

Putin on Saturday was responding to a statement about rap concert cancellations made by music producer and member of the advisory council Igor Matvienko. Among other suggestions, Matvienko proposed creating a parental advisory guidance system for concerts.

Putin noted that "rap is based on three pillars: sex, drugs and protest." But he is particularly concerned with drug themes prevalent in rap, saying "this is a path to the degradation of the nation."

He said "drug propaganda" is worse than cursing.

"We have to think here how to act so as to make sure it doesn't get so far," even if other countries are negligent on this issue, Putin said.

He said that he had talked about swearing with a linguist.

"She told me personally that it's a part of our language. It's just a question of how you use it," he said.

Matvienko also suggested guidelines on the use of swear words online and in the media, but Putin said this was a sensitive matter as such words are part of Russians' common culture.

Likening swear words to body parts, Putin joked: "we have all sorts of body parts, and it's not like we put them on display all the time, whether it's hot or cold."

He added that the question would be discussed further by members of his administration and the culture ministry.

Putin's comments come amid a crackdown on contemporary music that evoked Soviet-era censorship of the arts.

Last month, a rapper known as Husky, whose videos have garnered more than 6 million views on YouTube, was arrested after he staged an impromptu performance when his show was shut down in the southern Russian city of Krasnodar.

The 25-year-old rapper, known for his lyrics about poverty, corruption and police brutality, was preparing to take to the stage on Nov. 21 when local prosecutors warned the venue that his act had elements of what they termed "extremism."

Husky climbed onto a car, surrounded by hundreds of fans, and chanted "I will sing my music, the most honest music!" before he was taken away by police for hooliganism.

His arrest and sentence to 12 days imprisonment led to a public outcry and the rapper was released early, thanks to the intervention of members of the presidential administration, the editor of state broadcaster Russia Today said on Twitter.

On Nov. 30, rapper Gone.Fludd announced two concert cancellations, citing pressure from "every police agency you can imagine," while the popular hip hop artist Allj cancelled his show in the Arctic city of Yakutsk after receiving threats of violence.

Other artists have been affected as well — pop sensation Monetochka and punk band Friendzona were among those who had their concerts shut down by the authorities last month.

The popular Moscow gothic-rap duo Ic3peak could not play a single concert on a Russian tour without being hindered.

Putin's words are another twist in the story with unclear consequences.

Putin also addressed the question of how to regulate the musical genre's use of censorious language.