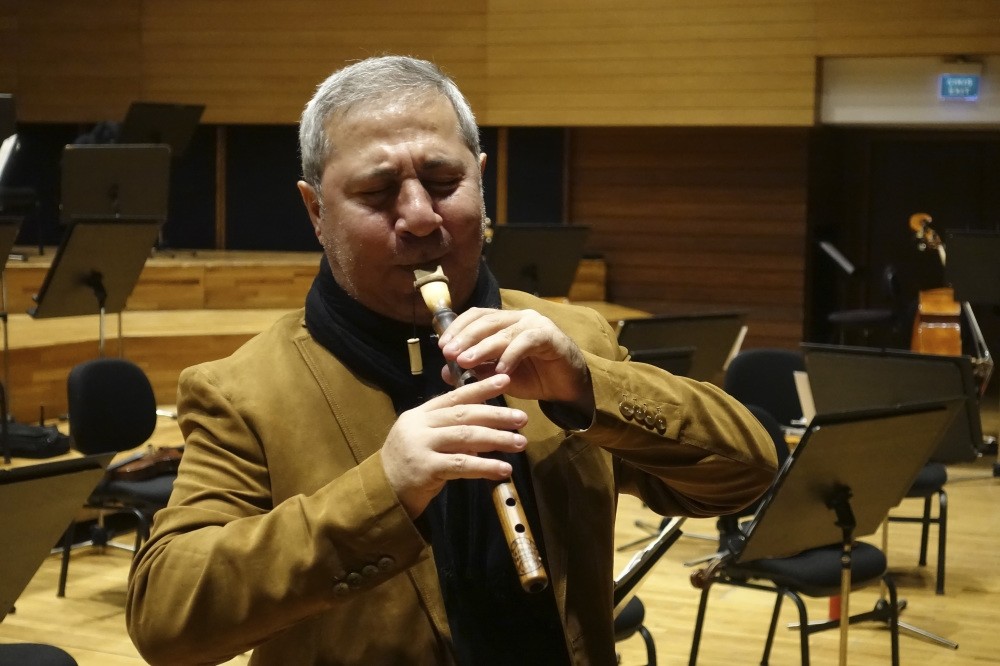 Master musician u0130lyas Mirzayev has prepared a concerto for balaban, also called a ,mey, for Samedov and the u0130zmir State Symphony Orchestra.
by Anadolu Agency Dec 24, 2018 12:00 am

Presented to the world by the famous Azerbaijani musician İlhan Samedov via performances of folk songs such as "Sen Gelmez Oldun" and "Sarı Gelin," the balaban, the sorrowful wind instrument of the Turkic world, has taken its place in the symphony.

Master musician İlyas Mirzayev has prepared a concerto for balaban, also called a "mey" or "duduk," for Samedov and the İzmir State Symphony Orchestra.

Speaking to Anadolu Agency (AA), Samedov noted that the word "bala" corresponds to "baby," while the word "ban" means "sound" and added that dating to much older times, the balaban is an instrument peculiar to the Turkic world.

Since he has arranged albums to promote the instrument, which have attracted much attention worldwide, Samedov said: "The world first heard balaban in a composition by the late Ali Ekber Tagiyev, titled ‘Sen Gelmez Oldun.' It gained worldwide popularity and was played on world radio. Later, ‘Sarı Gelin' became popular. People started to enjoy the instrument. Now, it is preferred by many people, such as the Germans and French. I work to make the people of the world love balaban. That's why I produce in various styles such as electronic music and New Age. We did it and people appreciated it."

Balaban lessons in curriculumNoting that the balaban has a special place in all Turkic nations, Samedov said: "Turkish musicians also know the instrument well. We attract much attention in most countries we visit. However, I see that this ethnic instrument is not popular enough in Turkish society. Thus, balaban classes should be offered in schools. When we are in Japan, people observe the balaban inch-by-inch. However, in Turkey, people still cannot differentiate between ‘mey' and ‘ney.' We have to educate our children."

tellıng the sorrow of world

Since that they recently presented the concerto for art lovers, Mirzayev noted, "We will go on promoting balaban to the world and leave a melancholic mark on the world."

İzmir State Symphony Orchestra Conductor Hakan Şensoy said that they want to pioneer innovation in the use of the balaban and are happy to present it to art lovers.