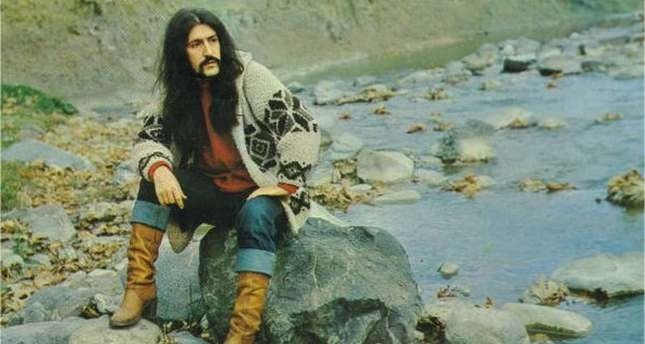 Legendary singer, composer, television host and actor Barış Manço is undoubtedly one of Turkey's most popular figures of all time. Widely regarded as the country's greatest cultural ambassador, Manço was remembered on Jan. 2, his 76th birthday.

With his long hair, silver jewelry and unique costumes, he was best known for his musical performances. He was also a celebrated television presenter, traveler and above all Turkey's cultural ambassador.

Besides his wonderful career, Manço was fond of Victorian furniture and a collector of Japanese and Chinese porcelain, 19th-century Orientalist paintings, as well as Art Deco and Art Nouveau glassware.

Barış Manço was born on Jan. 2, 1943 in Istanbul. Because of the ongoing World War II, his family named him Barış, meaning peace in Turkish.

Manço received his early education at Istanbul's Galatasaray High School. He later graduated from the Royal Academy of Fine Arts in Belgium in 1969. He studied graphic and textile design. In 1978, he married Lale Çağlar. The couple had two children together, Doğukan Hazar and Batıkan Zorbey.

Manço died of a heart attack on Jan. 31, 1999, just before the release of his album Mançoloji, celebrating his 40th year in the music industry. Millions of people attended his funeral in Istanbul.

With his passionate voice and combination of ethnic folk-rock themes, Manço explored folk poets (aşık) with diverse themes in his spiritual lyrics. He began his music career with the music group Kafadarlar (The Buddies) when he was in high school.

Considered the father of Turkish rock, Manço recorded his first singles in the early 1960s with his next band, Harmoniler (The Harmonies), which is one of the first examples of the Anatolian Rock genre, which combines elements of Turkish folk music with rock.

In 1970, he formed the band Barış Manço Ve... (Barış Manço and...) – recording his first hit single, "Dağlar Dağlar" ("Mountains, Mountains"), which sold over 700,000 copies.He later formed the legendary music group, Kurtalan Ekspres in 1972. He performed with the band until his death. His first and only live album was released after he toured Japan with Kurtalan Ekspres in 1996.

Manço started his TV career in 1988, directing and presenting the show "'7'den 77'ye" ("From 7 to 77"). The program was a combination of a talk, music and documentary show and aired for over a decade.

He traveled to nearly 150 countries, from the equator to the Arctic, and presented the culture of different countries on his TV show, which was broadcast on Turkish national television, TRT 1, from 1988 until his death.

In the 1990s, he gained worldwide popularity. More than 20,000 people attended his live concert in Japan, waving Turkish and Japanese flags in harmony.

Manço wrote and recorded more than 200 songs over the span of his career, some of which were translated into other languages, including English, Japanese, French, Italian, Greek, Persian and Arabic.