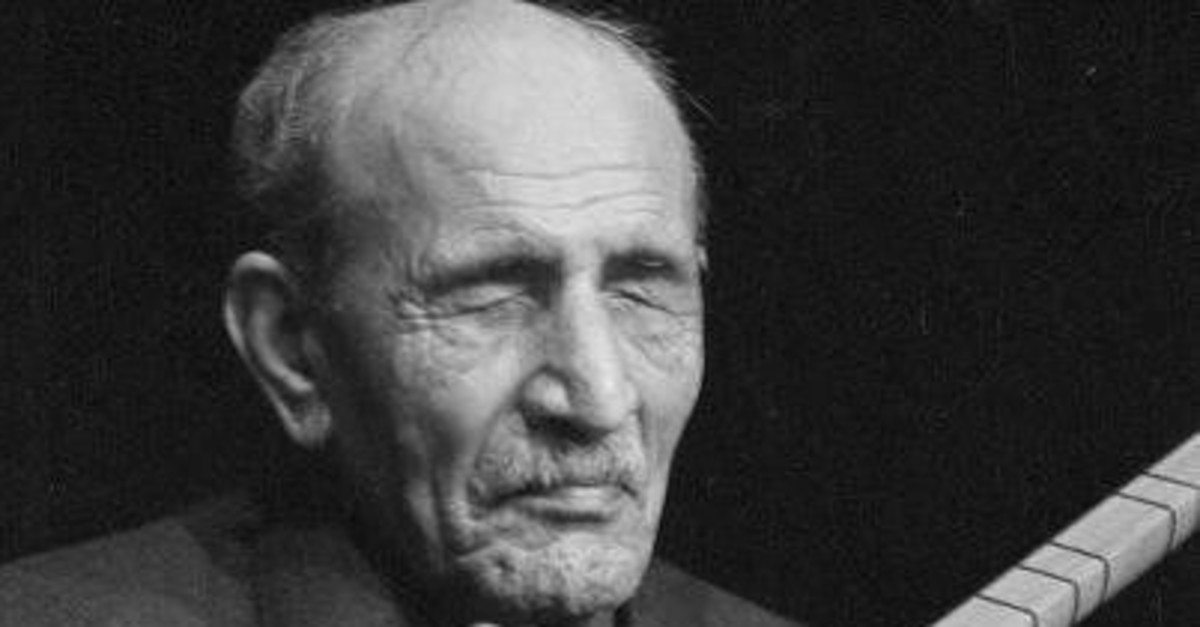 With passion and love, Au015fu0131k Veysel devoted himself wholeheartedly to the Anatolian Ashik tradition.
by Anadolu Agency Mar 22, 2019 12:29 am

Turkey on Thursday remembered Aşık Veysel, one of its most prominent early 20th-century folk poets and singers, who passed away 46 years ago today.

Veysel Şatıroğlu, or Aşık Veysel, was born in Şarkışla, a town in the central Anatolian province of Sivas, on Oct. 25, 1894. He lost one of his eyes at the age of 7 due to smallpox, and later a serious disease would claim two of his siblings.

Misfortune continued for Veysel, as he lost his other eye in an accident, depriving him of sight completely. But blindness did not prevent Veysel from contributing to life and society, in fact, it gave him insight and perspective through which he wrote his songs and poems.

Saddened by his son's health woes and loneliness, his father Ahmet bought him a bağlama, an indigenous long-necked stringed instrument which would later become Veysel's greatest companion.

With passion and a love for traditional Turkish songs and poems, Veysel learned how to play the baglama and sing, then devoted himself wholeheartedly to the Anatolian Ashik tradition, which is a bard tradition in Turkey that was common through the mid-20th century.

When Veysel turned 20 in 1914, that same year that saw the start of World War I, his friends joined the military while he stayed home due to blindness, alone with his bağlama.

Years later, in 1930, Veysel met Ahmet Kutsi Tecer, an education official in Sivas, an event which was a turning point in his life. He was discovered by Tecer after performing at a festival of folk poets. This encounter soon enabled Veysel to travel across Turkey to perform.

Veysel found work as a bağlama teacher in a couple of village schools in Sivas and his meetings with intellectuals in the training institutions contributed to Veysel's poetic abilities as well as theirs.

Influence beyond his passing

In the mid-1960s, the Turkish Parliament allocated a monthly salary to Veysel in return for his contributions to Turkish and national solidarity.

On March 21, 1973, Veysel died of lung cancer in the house he was born in Sivas. Now the house serves as a museum, attracting tourists interested in Veysel's life and traditional Anatolian culture.

In the three books of poems he wrote in his lifetime, Veysel's poems touch on a range of subjects, from the homeland to nature, to unity and labor and from loyalty to one's country to idealism.

In one of his poems, Veysel wrote:

They are all children of Adam

Together they become martyrs, veterans

What would be wrong with that?

Have a look at the Bible, Quran

Worthy all four [holy] books are

Discriminating and looking down on

What a shame that is?"

"Your beauty would be utterly worthless if it wasn't for my love for you," he says in one of his songs. In one of his best-known songs, Veysel refers to death as: "I'm on a long and narrow road, I walk day and night."

Veysel's influence on Turkish music culture flowered in the 1970s as renowned Turkish singers, most notably Fikret Kizilok, Selda Bagcan and Humeyra began to cover his songs and poems.

His music and poems often tinged with both happiness and sadness inspired a new generation of folk artists in Turkey.

Veysel was also a source of inspiration for Joe Satriani, one of the world's greatest electric guitar virtuosos. Satriani included two tributes to the Turkish bard, Andalusia and Aşık Veysel, on his 2008 album "Professor Satchafunkilus" and the "Musterion of Rock."