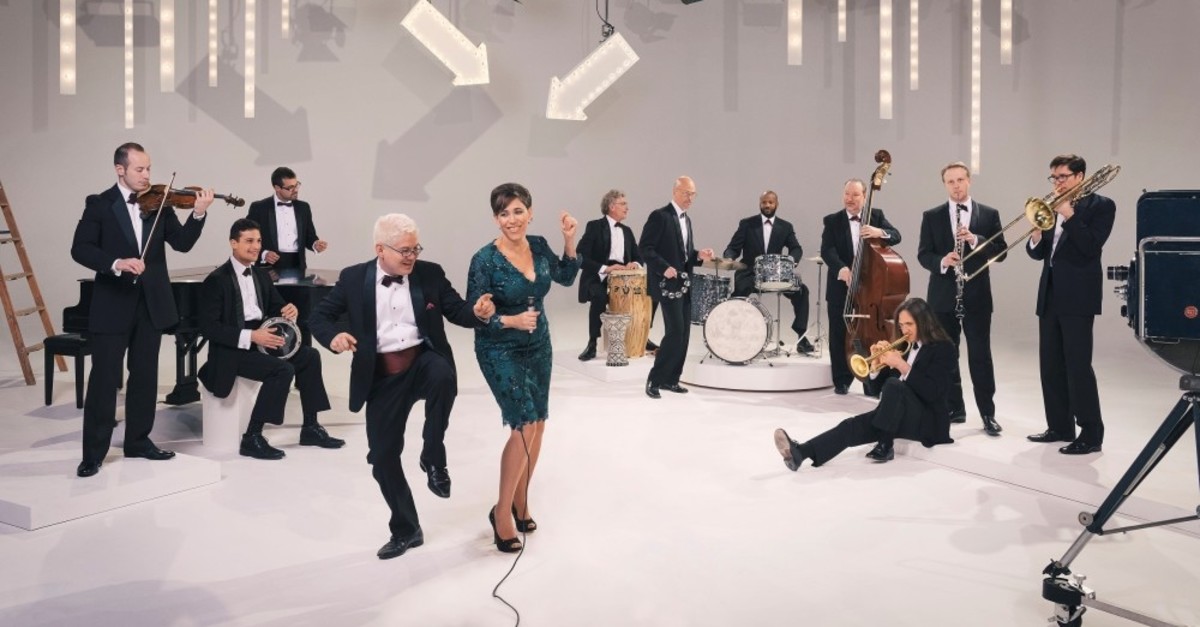 Having brought music from all over the world and from various times, Pink Martini will perform in Bursa, Istanbul, İzmir, Adana, Ankara and Konya between May 14 and May 21

Pink Martini stirs great excitement wherever they go. Singing the most enjoyable songs from Samurai love songs to 1930s Cuban music, French chansons to Brazilian Street songs, the band will tour six cities in Turkey. They will meet with fans in Bursa, Istanbul, İzmir, Adana, Ankara and Konya from May 14 to May 21.

As a surprise for Turkish fans, the band has sung the famous Turkish song "Aşkım Bahardı" in their latest album "Je Dis Qui."

Representing themselves "as music archaeologists who bring together melodies and rhythms from various parts of the world and present them in a modern form," Pink Martini's songs have so far been used in many films from "The West Wing" to "Desperate Housewives."

In 1994 in his hometown of Portland, Oregon, Thomas Lauderdale was working in politics, with the intention of eventually running for office. Like other eager politicians-in-training, he went to every political fundraiser under the sun but was dismayed to find the music at these events underwhelming, lackluster, loud and un-neighborly.

Drawing inspiration from music from all over the world - crossing genres of classical, jazz and old-fashioned pop - and hoping to appeal to conservatives and liberals alike, he founded the "little orchestra" Pink Martini in 1994 provide more beautiful and inclusive musical soundtracks for political fundraisers for causes such as civil rights, affordable housing, cleaning up the Willamette River, funding for libraries, public broadcasting, education and parks.

One year later, Lauderdale called China Forbes, a Harvard classmate who was living in New York City, and asked her to join Pink Martini. They began to write songs together. Their first song "Sympathique" (Je ne veus pas travailler) became an overnight sensation in France, was nominated for "Song of the Year" at France's Victoires de la Musique Awards, and to this day remains a mantra ("Je ne veux pas travailler" or "I don't want to work") for striking French workers. "We're very much an American band, but we spend a lot of time abroad and therefore have the incredible diplomatic opportunity to represent a broader, more inclusive America, which remains the most heterogeneously populated country in the world, composed of people of every country, every language, and every religion. Except for Native Americans, all of us are immigrants from every country, of every language, of every religion," says Lauderdale.

Featuring a dozen musicians with songs in 25 languages, Pink Martini performs its multilingual repertoire on concert stages and with symphony orchestras throughout Europe, Asia, Greece, Turkey, the Middle East, Northern Africa, Australia, New Zealand, South America and North America. Pink Martini made its European debut at the Cannes Film Festival in 1997 and its orchestral debut with the Oregon Symphony in 1998 under the direction of Norman Leyden. Since then, the band has gone on to play with more than 70 orchestras around the world, including multiple engagements with the Los Angeles Philharmonic at the Hollywood Bowl, the Boston Pops, the National Symphony at the Kennedy Center, the San Francisco Symphony, the Cleveland Orchestra, the Sydney Symphony at the Sydney Opera House, and the BBC Concert Orchestra at Royal Albert Hall in London.

Pink Martini has sold over 3 million albums worldwide on their own independent label Heinz Records, named after Lauderdale's dog. The band's debut album "Sympathique" was released in 1997, and quickly became an international phenomenon, garnering the group nominations for "Song of the Year" and "Best New Artist" in France's Victoires de la Musique Awards in 2000. Pink Martini released "Hang On Little Tomato" in 2004, "Hey Eugene!" in 2007 and "Splendor In The Grass" in 2009.

In November 2010 the band released "Joy to the World" a festive, multi-denominational holiday album featuring songs from around the globe. It received glowing reviews and was carried in Starbucks stores during the 2010 and 2011 holiday seasons. All five albums have gone gold in France, Canada, Greece and Turkey.

In fall 2011 the band released two albums - "A Retrospective," a collection of the band's most beloved songs spanning their 18-year career, which includes eight previously unreleased tracks, and "1969," an album of collaborations with legendary Japanese singer Saori Yuki. "1969" has been certified platinum in Japan, reaching no. 2 on the Japanese charts, with the Japan Times raving "the love and respect Saori Yuki and Pink Martini have for the pop tradition shines through on every track." The release of "1969" marked the first time a Japanese artist hit the American Billboard charts since Kyu Sakamoto released "Sukiyaki" in 1963.

In January 2012 bandleader Thomas Lauderdale began work on Pink Martini's seventh studio album when he recorded the Charlie Chaplin song "Smile" with the legendary Phyllis Diller. The album, titled "Get Happy," was released in September 2013 and features 16 globe-spanning songs in nine languages. The band's beloved vocalist China Forbes anchors the recording, and she was joined by her co-lead singer Storm Large, recording with Pink Martini for the first time, along with a cavalcade of special guests including Rufus Wainwright, Philippe Katerine, Meow Meow, The von Trapps & Ari Shapiro.

And while still in the studio for "Get Happy," Lauderdale simultaneously began work on the band's eighth studio album, "Dream a Little Dream," featuring Sofia, Melanie, Amanda and August von Trapp, the actual great-grandchildren of Captain and Maria von Trapp, made famous by the movie "The Sound of Music." These siblings have been singing together for over a dozen years and have toured all over the world in concert. Drawn into the magical orbit of Thomas Lauderdale, they now live together in a house in Portland, Oregon and have been frequent guest performers with Pink Martini for the past several years. The album, released in March 2014, traverses the world, from Sweden to Rwanda to China to Bavaria, and features guest appearances by The Chieftains, Wayne Newton, "Jungle" Jack Hanna, and Charmian Carr.