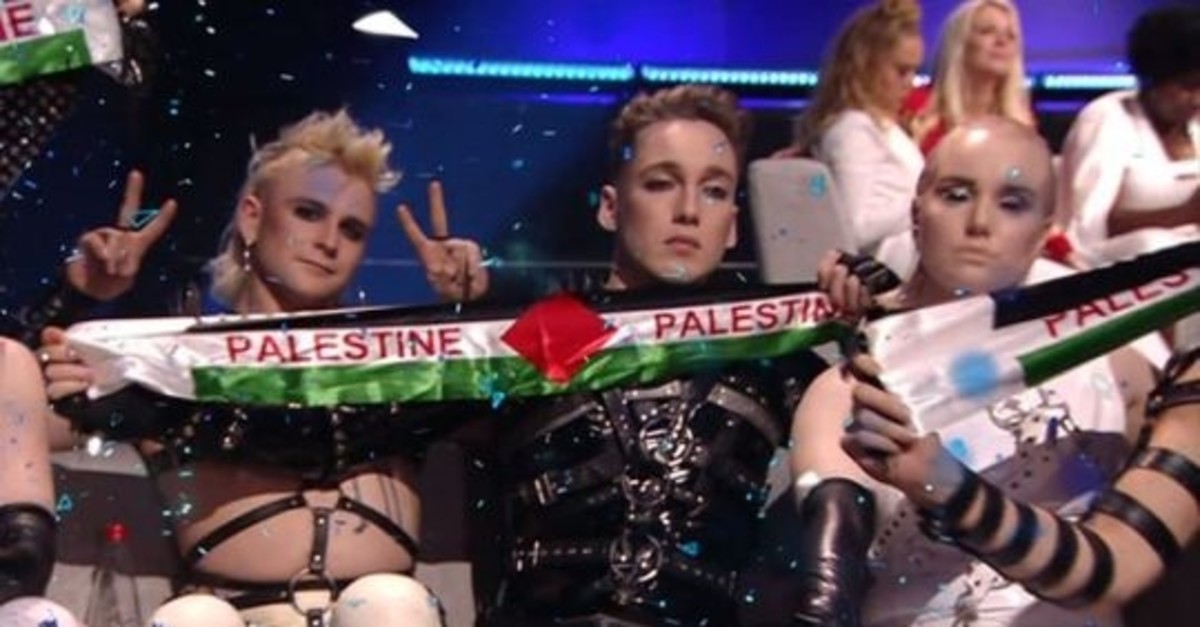 The team of Iceland used the Eurovision Song Contest to protest against the Israeli occupation of Palestinian territories, in an unexpected move that left the hosts feeling extremely uncomfortable.

The band Hatari, which represented Iceland at the song contest, held up banners in support of Palestine while hosts Bar Refaeli ​and Ezra Tel announced the country's points.

As soon as the hosts realized the band holding banners they immediately moved on to the next score.

Meanwhile, local media showed images of two of Madonna's dancers side-by-side with Israeli and Palestinian flags on their backs during her performance in an apparent call for unity. In a statement last week, Madonna explained her decision to sing on the Eurovision stage, saying she will always speak up to defend human rights and hopes to see "a new path toward peace."

After performances by all 26 finalists, Duncan Laurence of the Netherlands won the contest with the stirring power ballad "Arcade."

Italy finished second and Russia third in the results that combined votes from juries from participating countries as well as viewers at home.

The Palestinian Campaign for the Academic and Cultural Boycott of Israel responded: "Artwashing Israel's brutal oppression of Palestinians for a million dollars must be among the most immoral political agendas."

The Boycott, Divestment, Sanctions (BDS) campaign, which was launched in 2005 and is led by Palestinian campaigners, describes itself as a global movement to pressure Israel to end the occupation of Palestinian territories.

The Great March of Return, a key flashpoint for violence, began on March 30, 2018, when hundreds of thousands of Palestinian demonstrators converged on the buffer zone separating Gaza from Israel, calling for the easing of an Israeli blockade of the territory and recognition of the right of Palestinian refugees there to return home to Palestinian territories occupied by Israel.

Israel has rejected a Palestinian right of return as a threat to maintaining a Jewish majority in a country it describes as the nation-state of the Jewish people. Nakba Day marks the day in 1948 when Israeli militias forced as many as 750,000 Palestinians to flee from their lands. As the population increased over time, the number of stateless Palestinians reached 8 million.

Since then Palestinians have been left with no choice but to leave their lands and seek another country's passport. Palestinians have been struggling for their rights for decades. Frustration is growing among Palestinians as hopes fade for a two-state solution to the conflict that would give them an independent country. President Donald Trump's announcement in December 2017 of U.S. recognition of disputed Jerusalem as Israel's capital also fueled Palestinian anger.