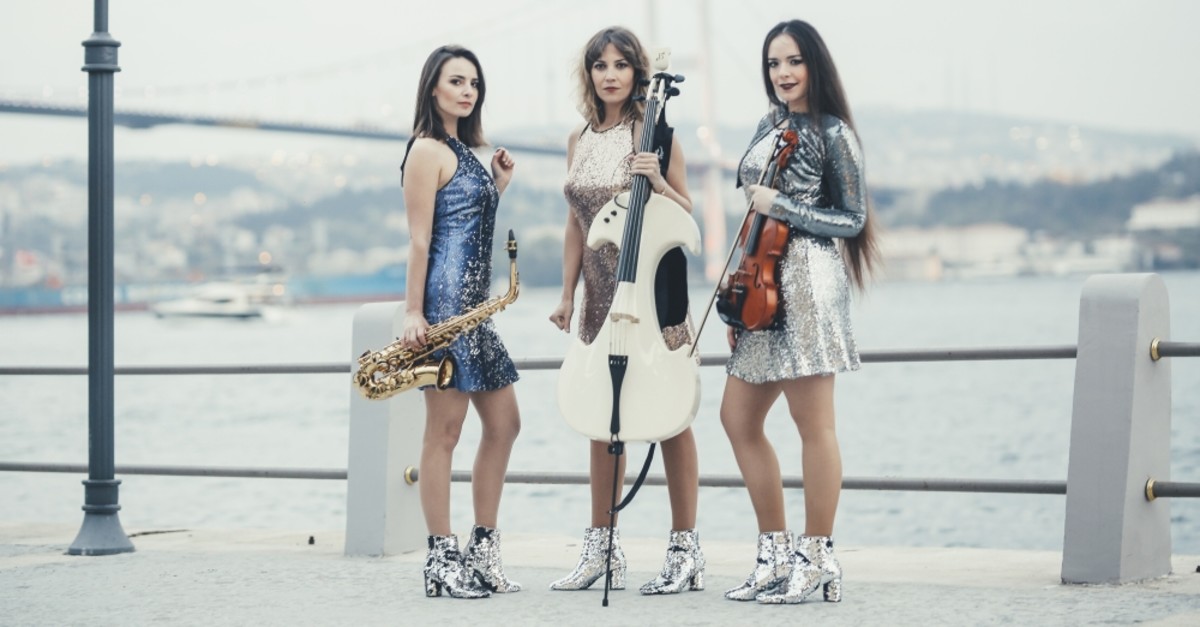 The band presents an out-of-the-box stage show with choreography and music hand in hand.
by Zeynep Esra İstanbullu Jul 04, 2019 12:34 am

With a background in classical music, the all-female trio, Trionstage, brings innovation in music and performance with their choreography and sound

The all-women's band, Trionstage, has filled a gap in the entertainment industry with their rising popularity. They take the stage at weddings, parties, gatherings in consular gardens and all kinds of events and offer a musical and visual feast.

Nihan Demirkapı is the cellist, Aslıhan Batur the violinist and Hülya Uysal is the flutist and saxophonist. These three women, who all have classical music education, crossed paths in schools and on the stage.

Daily Sabah conducted an interview with the trio on the new trend, on their works and inter-group communication.

"We know each other from within the sector but we are also school friends with Hülya. We studied together at Mimar Sinan University State Conservatory. I was introduced to Aslıhan through Hülya. We used to run into each other because we are in the same line of business. Our acquaintance goes way back," said Nihan. 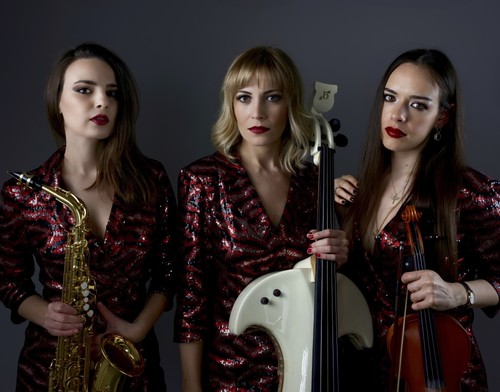 Trionstage consists of Hülya on saxophone, Nihan on cello and Aslıhan on violin.

The three women performing in various venues set out to bring a fresh breath to the industry and art. "We were performing with similar bands, who mostly improvised at the event and organization sector. But we wanted to take it one step further and make a difference. Lately, digital music infrastructure is preferred in the music industry, turned our music into something even more colorful. Because there were too many acoustic performances. But we give live performances on structures prepared digitally," said Hülya.

Violinist Aslıhan continued, "We had the chance to set ourselves a repertoire. We play various genres from pop to rock, even light jazz. Sometimes, we get the chance to add music from certain countries. For example, if we are to play at an Indian wedding, we set our repertoire according to the demand. We mostly do covers."

The trio, who set on an alternative course after their classical music education, opened a new page in terms of music. "When electronic music was introduced, it became an electronic cello. Electro violin. We perform with wireless microphones. We are far from classical music. We also have our own compositions and arrangements along with covers," cellist Nihan Said. "We do not work in a fixed position. We are offering a stage show as well. This show, as well as our music, is unusual," Aslıhan added.

The repertoire of the group, which takes the stage in different styles and genres, also differs accordingly.

As Aslıhan stated, the trio performs at inaugurations, fashion shows, launch parties, weddings and many others: "We are everywhere if there is a keyboard."

Hülya remembered they performed at an Indian wedding, which Turkey has become a popular destination for, and created a specific repertoire for that certain occasion. "They had brought their DJs at an Indian wedding we performed at. We worked on that repertoire and prepared for a few days. In some events, we also determine the playlist. We decide what kind of an event it is and the profile of the audience."

"There is background music at each stage and we accompany that music with our instruments. We create something like instrumental karaoke. But sometimes there is polyphony as if there was an orchestra. For example, if there is a rhythm in the structure, it sounds as if we are playing a polyphonic orchestra," Nihan said.

The extraordinary show attracts the attention of the audience and positive feedback motivates the trio.

"People are surprised. They appreciate it when they see a performance and a visual show. We always strive to do better. Good feedback, exciting comments motivate us. It is not popular to listen to something fixed in our age. Watching a video even on social media becomes boring, we swipe it with a finger. We are trying to figure out how people can watch a stage show in such a dynamic era," Aslıhan noted on the feedback they get.

DRAWING IN THE CROWD

"Usually performers are on a stage and do not move. But we walk among the audience. We are fully mobile thanks to the wireless microphone. While the cello is normally a fixed instrument, Nihan carries her cello around with a piece of special equipment. We sometimes separate into different corners but continue our show connected to each other. We can accompany the audience's entertainment. In classical conservatory education, all efforts are directed to the instrument thanks to certain sitting and postures. We are completely breaking this down and playing our instruments with a different posture. We are doing this in elegant costumes and heels. All these are exciting and new for the audience as well," Hülya expressed.

Nihan, who carries her cello on her lap, offering an extraordinary performance, said, "I used to carry the cello while standing up. I realized people like it better when we are more active. So I researched. I started using an apparatus. It was hard to carry around in the beginning but then something nice came out of it. This allowed us to do mobile shows."

The transition from classical music to this alternative style was both painful and fruitful.

"We started our education in music schools when we were children. With the changing employment conditions and emerging music genres, musicians seek something different. We played in orchestras after graduation. We performed classical music. With the evolving entertainment industry, we started playing more popular music. The greatest contribution of classical education to us is our discipline and mastery of our instruments. We are taking advantage of this but we also produce something new according to our own personal taste and current trends in music," Hülya noted on how their style transformed.

"This is actually a revolution, getting out of that conservative environment. We took out the black costumes and put different costumes on stage. There is an internal conflict for people who are excited to do something new. But this conflict leads to beautiful fruits.

"Choreography accompanying music is also another element drawing the attention of the audience," Aslıhan noted.

The band not only makes music, but also makes a serious effort on choreography to keep the audiences full attention. "We worked with choreographers. We worked at dance studios. Then, we started feeling that dance inside us together with the music we performed. We set on a path that is shaped by music. Sometimes our dances are so harmonious with our music, we think we should make a dance group," Nihan said.

"Dance always had a large part in my life as I was a tango instructor and assistant. Plus, we all have a connection to music. We push ourselves and write our own choreographies. While we usually get professional help for larger projects and events, we mostly listen to the sound inside us," Hülya noted about her love for dance.

The trio is not only formed by three women who come together for professional purposes but also three friends who love and understand each other. The importance of the synergy between shows itself in Nihan's words: "We know how to empathize and there is no ego problem between us. There is no hierarchy in our band. We all have an equal share in music and dance. This is the success of this trio."

"We are locked onto the same target. But it is also important for us to be good friends. We see each other outside of work. All three of us are very different characters. So are our functions within the band. We try to bring out the best in each other," Aslıhan highlighted.

Another trivet of the band along with music and dance is the business side. The band members are also female entrepreneurs.

The business and financial part of the work is also carried out by the band members. "There is the business side of this along with our art. We also follow the business part. We work full time as freelancers. We also manage email traffic as people sometimes contact us directly through e-mails. From costume to choreography, music to communication, we run it all. As a result, a more modest and organic product is emerging. Our communication in the group is going smoothly. While we may not have written job descriptions, we all have them. I deal with the company part, Aslıhan with music development. Hülya deals with financial issues," Nihan explained.

"Nihan's management of our social media and video editing duties is a job in itself. We are also businesswomen along with being musicians. Our aim is to create a brand. Became a corporate brand, with social media and art performance.

"The trio is planning on releasing a single. We have a plan to put out a single with our own composition and arrangement," Hülya concluded.