Voices of Turkic world to resonate throughout Europe and Balkans 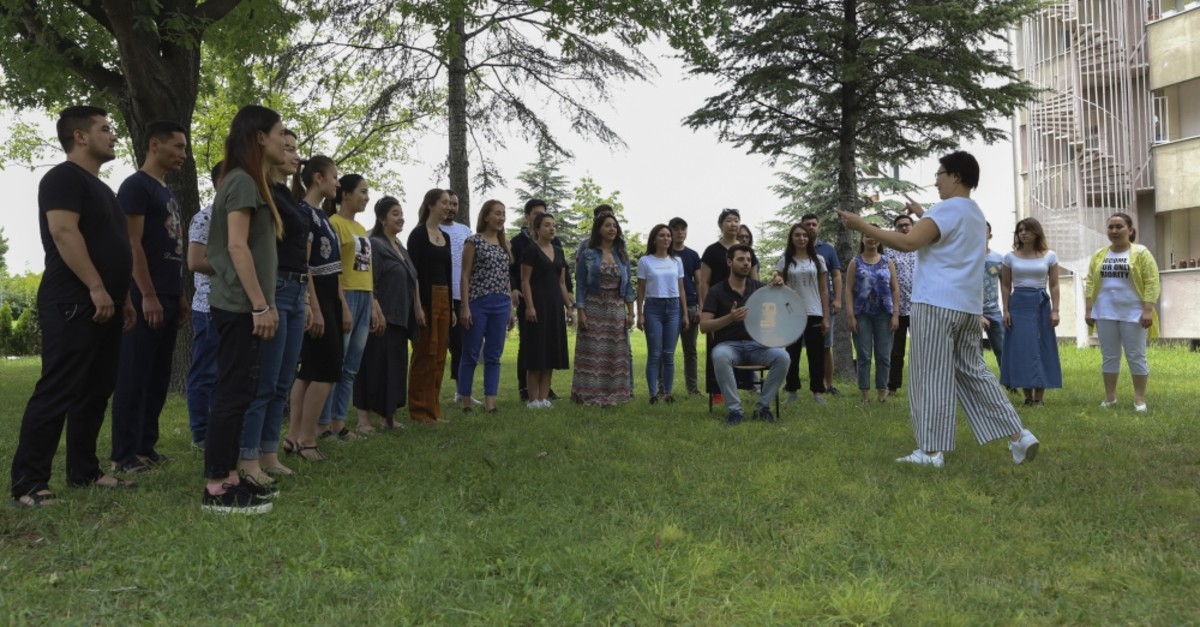 Young singers from different Turkic countries who come together under the roof of the International Organization of Turkic Culture (TÜRKSOY) Youth Choir are ready to perform Eurasian songs throughout Europe and the Balkans.

Attending the choir from Turkic republics such as Azerbaijan, Kazakhstan, Kyrgyzstan and Uzbekistan, the young musicians will add a new edition to their concerts, which they will perform around the world with a repertoire of Turkic works.

They will meet art lovers at the 2019 European Cultural Capital Plovdiv, Serbia's Novi Pazar, Montenegro's Espressivo Music Festival and Budva Summer Festival, Dubrovnik, which is mentioned as the pearl of the Adriatic and Trogir with the collaboration of the Ministry of Culture and Tourism and the Yunus Emre Institute (YEE). Also, they will perform at World Choral EXPO in Portugual's Lisbon and Cascais with the invitation of the International Federation for Choral Music (IFCM) and at the 10th Anniversary celebrations of YEE. The chorists, who are preparing to go on tour including Turkey, Bulgaria, Serbia, Montenegro, Croatia and Portuguese, spoke about their excitement to Anadolu Agency (AA) during their rehearsals in the capital Ankara.

Kazakhstan Philharmonic Choir Conductor Gulmira Kuttybadamova, one of the conductors of TÜRKSOY Youth Choir, said that they have been performing concerts for five years. "Every passing day, these concerts become better. We have become a large family here," she stressed.

Noting that they have come together with many youngsters in this period, Kuttybadamova added, "We have a repertoire comprising of songs in 10 different languages. We perform more than 70 compositions."

She remarked that they are very proud of introducing their local music to other countries. "Besides, the 125th birthday of Turkish bard Aşık Veysel is being celebrated this year. We have some works in this context."

'It is so exciting to sing in different languages'

Uzbek Farogat Abdusalamova stated that she is attending the choir for the second time and reported, "I represent Uzbekistan in this choir. I am very pleased to be a part of this organization."

Emphasizing that they were satisfied to hold their rehearsals in Ankara, Abdusalamova continued, "We will be in the Balkans first on our tour and then attend a big festival in Lisbon."

Another chorist, Kirghizian Adil Kanybekov said that he took part in the choir for the first time and mentioned that he is excited. Kanybekov was happy to spend time in Ankara. "I am so pleased to be together with friends from different countries in the TÜRKSOY choir. It is so exciting to sing songs in different languages."

The TÜRKSOY Youth Choir, which was formed in 2015 with talented vocal artists from the prominent conservatories in the Turkic world, won awards in three different fields at the World Choral Olympics, held in Germany in the same year. Thirty-five young artists from Azerbaijan, Kazakhstan, Kyrgyzstan, Uzbekistan, Turkey and Tatarstan attend to the choir this year.