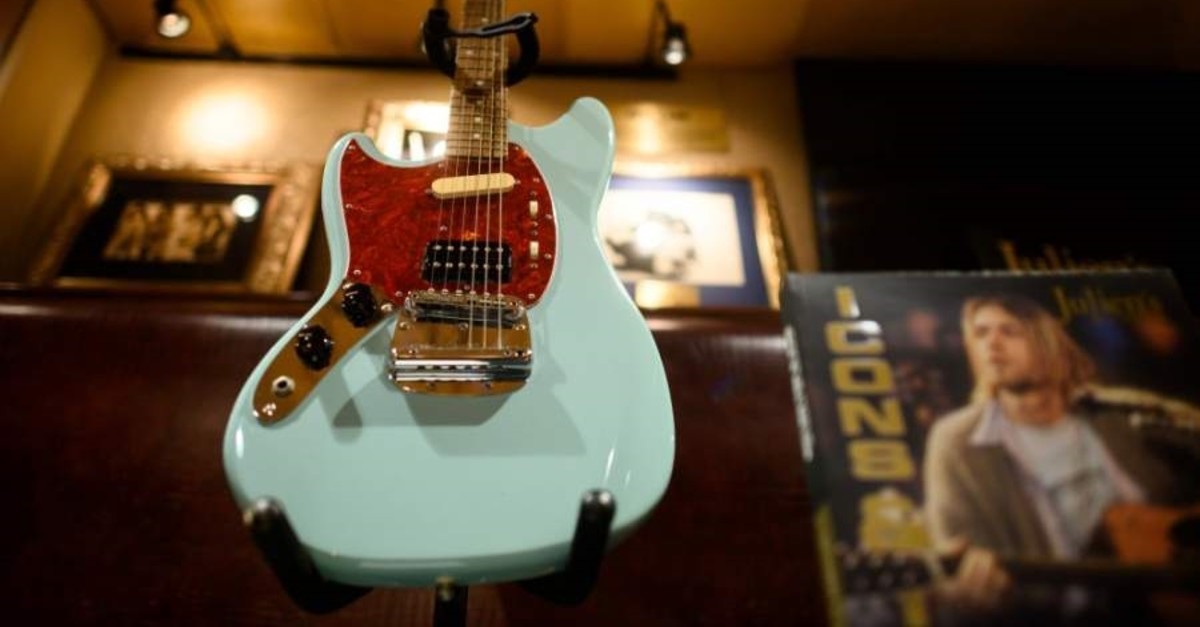 Kurt Cobain's custom-built left-handed Fender Mustang guitar that he used during Nirvana's In Utero tour is on display at the Hard Rock Cafe in New York City ahead of the auction of Julien's Auctions on October 21, 2019 in New York City. (AFP Photo)
by Oct 22, 2019 6:25 pm
Fender Musical Instrument Co will help musicians play along with their favorite songs on their guitars with a subscription service released on Tuesday that will display chords to millions of tunes, the latest effort in the 73-year-old electric guitar maker's digital revenue strategy.
Called Fender Songs, the app taps into machine learning technology that analyzes songs streamed through Apple Music and generates chord diagrams for the songs. Fender uses human auditors to double check the work of computers and has partnered with major record labels to ensure the accuracy of the charts and with music publishers to ensure artists are paid for the use of their lyrics.
The app costs $4.99 per month or $41.99 per year and, in "play-along" mode will scroll the chords and lyrics across a player's phone screen as the song streams.
Fender, whose guitars have been played by musicians from Jimi Hendrix to Jack White, has released four apps over the past two years in an effort to reach new players and rekindle interest from existing ones.
Andy Mooney, Fender's chief executive officer, told Reuters Fender spent nearly two years working out deals with recording rights holders such as Warner Music Group to ensure the accuracy of its chord guides and with music publishers Sony/ATV Music Publishing, Warner Chappell Music, Kobalt and BMG around songwriter royalties.
"It was critical to us that we be 100% legal when the product launched - we want to ensure the artists get fairly compensated for the work," Mooney said.
The Fender Songs app is starting on Apple devices, in part because the app relies on Apple Music's existing deals with record labels to ensure payments are made for each song stream. But Ethan Kaplan, general manager of Fender Digital, said the company hopes to expand to other services in the future. Fender has staked its digital growth strategy on the premise that interest in recorded music is expanding.
"There's 255 million people paying for streaming now," Kaplan said. "We want to tackle the whole market."
The digital effort has helped privately held Fender's sales grow in the "high single digit, low-double digit" percentage rate, and the company expects to end 2019 "healthily above" $600 million in revenue, Mooney told Reuters. Fender will spend about 9 percent of that on marketing, much of it designed to lure new players who came of age when guitar-dominated music genres like rock were less popular.
The apps "brought us an incremental swath of new consumers in the market who hadn't previously considered picking up guitar. The dealers are reporting that across the board - that new entrants to the market are coming to their stores and websites," Mooney said.