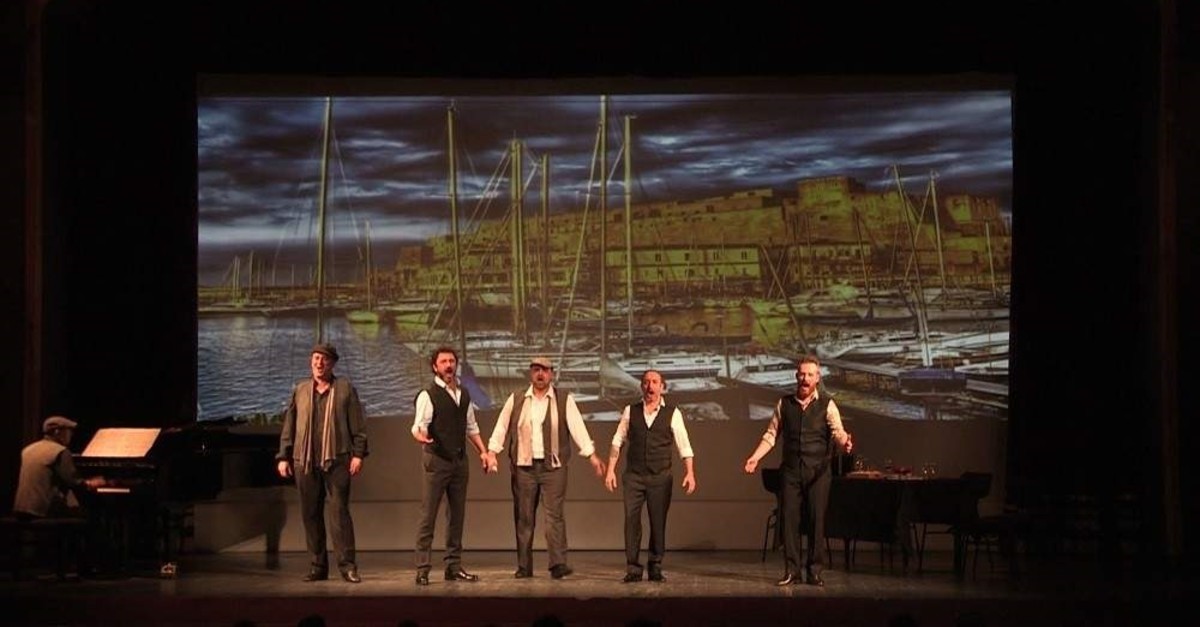 A still from a performance of the Neapolitan Concerts.
by Daily Sabah Dec 08, 2019 6:50 pm
The Neapolitan Concert, consisting of emotive Italian folk songs which have won the audience's acclaim in previous seasons with the performance by the tenors of the Istanbul State Opera and Ballet, is like a short trip to Italy.
While the songs in the concert are dominated by sadness and joy in patches, the works by distinguished composers, including Eduardo Di Capua, Francesco Paolo Tosti, Ernesto De Curtis, Rodolfo Falvo, Luigi Denza, Cesare Andrea Bixio, Guillaume-Louis Cottrau, Ruggero Leoncavallo and Salvatore Cardillo will be performed.
Among the works included in the concert program, there are “l’te vurria vasa,” “Mattinata,” “Non ti scodar di me,” “Fenesta Che Lucive,” “Dicitencello Vuie,” “Tu ca nun chiagne,” “Torna a Surriento,” “Mamma,” “Marechiare” and “O sole mio.”
During the concert, Besnik Ademoğlu, Serkan Bodur, Berk Dalkılıç, Can Reha Gün, Yoel Keşap, Ufuk Toker and Onur Turan will be accompanied by pianist Hüseyin Kaya. The concert stage will be designed by Hüseyin Kaya and the light design has been undertaken by Taner Aydın.
The performance will take place at the Kadıköy Süreyya Opera Stage on Dec. 13-14 and on Feb. 28, 2020, and at the Zorlu Performing Arts Center (PSM) Turkcell Platinum Stage on Jan. 13, 2020.
Last Update: Dec 20, 2019 2:13 am
RELATED TOPICS