Turkey excels with stability in the Middle East 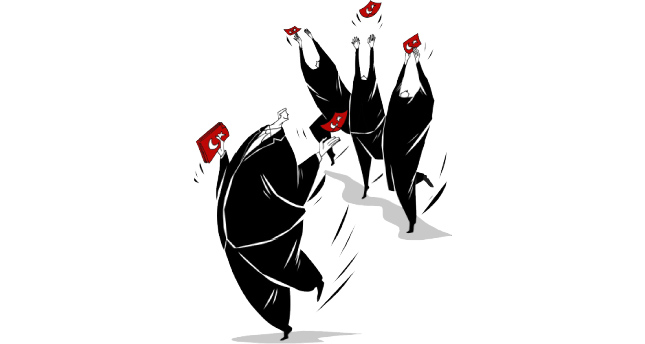 by Baha Erbaş Mar 05, 2015 12:00 am
Since the Tunisian revolution and the collapse of the regime of Hosni Mubarak in Egypt, the Middle East has been going through a watershed transformation unparalleled in its history. This historic transformation has not only shattered the traditional monarchies in the region, but from the outset, it has also compelled the U.S. and other great powers to revitalize and thoroughly re-set the locus of their grand strategies from the Atlantic to the Indian Ocean in the center of the Middle East. Shaky alliances, frozen boundaries and grimy regimes are all at stake. This situation first and foremost forces the U.S. to scrutinize and re-draw its grand strategy, over which the administration of U.S. President Barack Obama has fallen apart. Not only the U.S.'s Syrian policy that has been somewhat more indecisive and impotent than ambivalent, nor the Syrian civil war and its dramatic repercussions, but also the U.S.'s stubborn posture of continuing to implement old-fashioned policies and tactics in the region under very new circumstances, consequences and unexpected developments, have all dramatically decreased its credibility and its ability to maneuver in the Middle East. This situation will badly affect the U.S.'s global standing and widen the discrepancy and divergence not only between the U.S. and Middle Easterners, but also between the U.S. and other great powers in global and regional rivalries. Those in the U.S. State Department, White House and the Pentagon think that they can produce very different outcomes and categorical successes by repeatedly implementing old, flawed tactics and policies on the same people of the same region, while leaving behind many traces of a double standard. In his realistic and sharp memoirs, "Duty: Memoirs of a Secretary at War," secretary of defense for both George W. Bush and Obama, Robert Gates, bewails the ordeal that he has suffered in American politics. It describes the faint visions, tenuous world views and imperfect knowledge of Washington's statesmen, diplomats and senior officials in almost every area of world politics that CNN or the Wall Street Journal point out as great external threats to U.S. security, interests and democracy in the Middle East.

We all still are not convinced today which of these most undermines the U.S.'s soft power globally. On the one hand, we have the Russian President Vladimir Putin's futile efforts to maintain the former Soviet Empire's "near-abroad" in his sphere of influence, which appears heroic and assertive in the short run, but will most likely lead Russia to disintegrate in the long run. We also have Iran's sneaky nuclear ambitions that will lead the region's other big players onto the same path, as well as China's growing influence in the Pacific. On the other, there is the U.S.'s unconvincing and far-fetched implementations and strategies, especially in the Middle East - as Roger Owen of Harvard said: "If they have one [a strategy]." Since the beginning of the Cold War, the U.S. has been the leading powerhouse of liberalism and democracy, and has promoted the mantra worldwide, and have even conducted operations around the globe in its name. The matter is far beyond questions such as whether Mohammed Morsi governed well or not, a responsibility for which he definitely was unprepared. The very first group of people and public opinion that the U.S. unfortunately lost are those who had put a "great hope" in the Arab Spring, while the U.S. was winking at the military to overthrow the elected government in Egypt and remaining silent about one of the greatest massacres of modern times taking place in Syria.

Amid all the hurly-burly, the only clear consequence of this historic transformation will be that the momentum pushes Middle Eastern countries and regimes toward more open societies, civil rights and eventually, democracy. Besides this crucial and solemn prospect, nothing is clear about the future of the region, regimes, states, alliances or boundaries. Turkey is the only long-standing democracy in the region, with its first constitutional parliament having been established in 1876 in the Ottoman Empire. With this influx of history, Turkey, with the largest economy, military and stock market, carries on its shoulders not only a historical responsibility and deeply democratic experience, but also exemplifies for the Middle East how a success story can derive from a country blending Middle Eastern, Muslim and democratic cultures with one of the world's most vibrant economic successes, even without its own oil and gas reserves in the midst of a region that contains 60 percent of the world's oil. A Middle East that has endured nearly a century of totalitarian regimes understands that Turkey represents and reflects strong stability in the world's most unstable region.

This is the grand soft power of Turkey, even though it is not a desired dictum behind the doors among Middle Eastern totalitarian regimes - this is what Turkey epitomizes in Middle Eastern people's minds. Through these features, Turkey is always regarded by the great masses in the Middle East as a coveted and envied actor. Middle Eastern societies need this modus vivendi more now than at any other time. Outside powers that in the past intervened in regional conflicts have shown that they do not have any agenda that targets the actual development of democracy and civil society or human rights, as was made clear with their stance in the cases of the military coup in Egypt or the Syrian President Bashar Assad's killing of many thousands of his own people.

Turkey experienced much tumult during the harsh processes of democratization within the last century. Turkey knows well through its painful story that democracy has its own steps and it is a lifestyle that must be nurtured and carefully tended day by day. What makes Turkey unique, is that for the people of the Middle East, it is natural and reasonable to contemplate Turkey as first among them, from them, in them. Turkey is the only power in the region, while having the strongest military backed by NATO membership as well, that has never been involved in any degree of military conflict or war with any countries, which today gives Turkey great credibility among people of the region. This creates a resonant voice for Turkey among the region's people. Turkey is indeed "the virtuous power" that it has been called.

Throughout the 19th and 20th centuries, European colonial powers devastated Middle Easterners through malevolent and brutal colonialism. The bitter and notorious memories of the past make it impossible for an outside player to implement anything in the region. Turkey is the only model among and from them that can be used in this watershed process. This gives Turkey a historical responsibility in the long run due to its "soft power."It is being said in Western capitals that "the Arab Spring has diminished Turkey's regional power and its conciliator role." It rather seems that among all the large regional and outside powers, Turkey is the only actor since the beginning of the Arab Spring that has sometimes undervalued and sometimes ruled out short term interests, benefits and alliances for the sake of long term, definite consequences for democracy and human rights in Syria, Egypt and other places. This makes Ankara the sole long-term player that Robert Gates's peers in Washington do not yet seem to have comprehended.
RELATED TOPICS