Residency permits for Syrians then and now 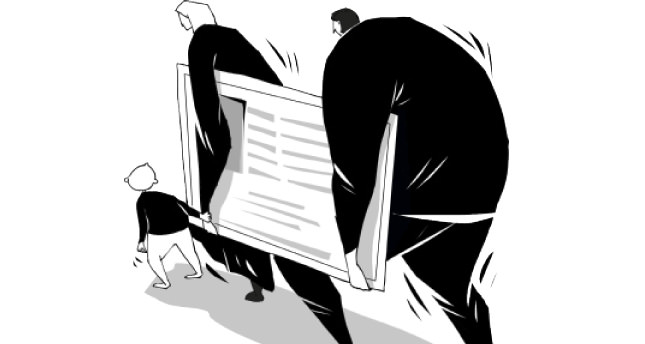 For some reason, Syrians in general seem to be especially susceptible to rumors. During the conflict, many highly dubious bits of hearsay were given great credence and repeated as fact on news outlets and social media. Syrian President Bashar Assad's wife Asma, it was said, had divorced her husband and fled to the U.K. Other rumors had it that Bashar Assard's brother, Gen. Maher Assad, had shot Syrian Vice President Faroq al-Shara in the leg. Even others maintained that Maher himself had lost both his own legs in an explosion. The regime used rumors of dire consequences and repercussions to intimidate tens of thousands of Syrians in Lebanon to come out and vote in sham presidential elections in 2014.

Any displaced community is always sensitive to new rules and regulations that might affect it. In the middle of 2014, the Turkish government undertook a comprehensive overhaul of all categories of residency permits for foreigners residing in the country. One of the measures taken was to eliminate the old "humanitarian residency permit" through which the residency of Syrians had been legalized and regulated, and the introduction of the new "Yabancı Tanıtma Belgesi" (Foreigner Identification Document), an ID card specifically for displaced Syrians and Iraqis.

And as would be expected, the rumor mill among Syrians residing in Turkey went into overdrive. Speculation on the motives behind the introduction of the new card reached absurd levels. People who registered for the cards, it was said, would be barred from travel outside of Turkey, and those who tried to smuggle themselves into Europe for asylum would be immediately sent back. On Syrian Facebook pages, there was much wailing that the "dream of asylum in Europe" had been shattered forever. Drawing on the experience of Palestinian refugees in Arab countries, many dire predictions were made among Syrians as to constraints in travel and places of residence that would soon be imposed on holders of the card. And the fact that fingerprints would be taken during the registration process seemed to give the whole thing a very sinister aspect in the minds of Syrians who had never had a pleasant occasion to provide fingerprints.

On reflection, it should not have been surprising that many Syrians dreaded the worst when the system regulating their residency in Turkey was overhauled. Sixty-plus years of observing the treatment of Palestinian refugees in Arab countries had conditioned Arabs to dread the word "refugee." But yet again, Turkey would demonstrate that it took human rights far more seriously than any Arab country. First, a quick review of the old "humanitarian residency permit" that until 2014 was the means by which Syrians legalized their stay in Turkey. On paper, it was a relatively straightforward process with the minimum of requirements - a valid passport and around TL 100 ($38) in fees - and after a wait of three months, the residency permit would be issued at the city's main police branch.

Alas, it was the final step of actually receiving the booklet that would prove quite problematic to many Syrians, especially for those living in Istanbul. While appointments would be staggered to enable a police branch to handle a reasonable number of applicants, it was the rare Syrian who actually arrived on their appointment day, the phrase "present yourself on X-date" apparently having been understood to mean "just show up with your entire family any time after the date on your appointment form." The result would be hundreds of Syrians arriving to get processed at a police branch whose systems were never meant to handle more than a hundred appointments daily. Most Syrians would have to make repeated visits, arriving in the very early hours of the morning before they got a chance to be photographed and fingerprinted for their residency booklets. A process that was meant to take just two months could, in the end, drag out to four or five.

But when the residency permit was issued, it could be utilized for every service available including mobile and Internet subscriptions, banks, rental contracts, money transfers, utility registration and travel outside of Turkey. And yet, while the humanitarian residency permit provided immense utility, the fact that it required a valid passport to obtain meant that it could not address the needs of a large segment of the most hard-pressed Syrians in Turkey - those that had arrived in the country with no passports. The new ID card introduced in the middle of 2014 was setup specifically to address this issue and to be useful to those Syrians who needed assistance the most. Far from constraining Syrians, it would prove to be a boon to numerous families for whom the old residency permit, and the services it provided, was unobtainable.

After the overhaul of the residency permit system, the responsibility for registration was distributed among each city district's main police branch. No more waiting in long lines at one central location, and the documentation required to obtain the new ID could not have been made any simpler - a rental contract along with any kind of proof of identification issued from Syria, such as a national ID card, army service booklets, family registration papers, Syrian driving licenses or even expired passports. No fees required, not even photographs. A Syrian family could show up at a police station at 10:00 a.m., be photographed and, of course, fingerprinted and walk out with a new ID in an hour, their stay in Turkey safeguarded with very minimum effort, especially compared to the cumbersome, three-month long process required from other foreigners seeking to obtain a tourist visa for a yearlong stay - three months, ha! It took me all of 30 minutes to get my ID.

In addition to normalizing a displaced person's residence in Turkey, the card provided access to free health care at state hospitals and schooling for children. While the old permit was valid for just one year at a time, much of which would be taken up by the very process of applying for the permit, for now the new IDs seem open ended. And contrary to the outlandish rumors that circulated in the months before the card was adopted, persons registered can leave Turkey for other countries anytime they choose.

And what of the big, overriding concern that so dominated much of the discussions among Syrians regarding the card, the one about the route to asylum in Europe being permanently barred to those who were "fingerprinted" into the system? That arose out of a misunderstanding of the EU-Turkey Readmission Agreement signed in 2013 and ratified by the Turkish Parliament in 2014. Under the agreement anyone, regardless of nationality, who attempts to illegally enter the EU from Turkey, faces deportation. In practice though, each EU country has its own policy regarding Syrian refugees, and so far the agreement has not been used to deport Syrians back to Turkey.

Far from constraining Syrians the same way Palestinians have been constrained for years in the Arab world, the new ID card has provided a painless way to normalize one's residence in Turkey and allowed access to much needed social services. Indeed, Turkey is the only country in the region that allows entry to Palestinian-Syrians. In Jordan, a Syrian refugee requires a sponsor to live outside refugee camps. Lebanon has imposed huge restrictions and visa requirements on any Syrian looking to stay there. Yet again, Syrians have much to be grateful for in the hospitality displayed by the Turkish people, a hospitality we have not been shown by any Arab country or by most of Europe.
Last Update: Mar 16, 2015 9:53 pm
RELATED TOPICS