The battle for Tikrit: Is Iraq going down that sectarian road again? 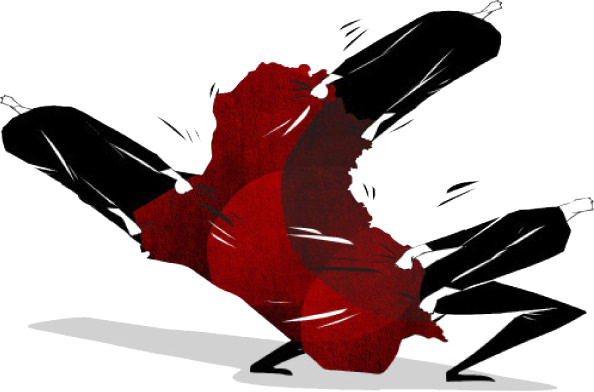 Why does the following sentence hold so much significance? Iraqi forces, backed by thousands of Shiite militiamen and Sunni tribesmen and supervised by the commander of the Iranian Revolutionary Guards' elite Quds Force, Major Gen. Qasem Soleimani, launched an attacked to retake Tikrit, which is controlled by the Islamic State of Iraq and al-Sham (ISIS), without the assistance of coalition forces. This pretty much sums up Iraq's past, present and, most likely, its future failings. Just who are the "official" government forces and why, after a decade of rebuilding, extensive training and supplied with vast amounts of weaponry, do they need to be significantly augmented by Iranian-backed Shiite militia or, indeed, led by a Quds Force commander?

Any sense of a united force is lacking in Iraq and having wasted the chance for several years to build a cross-sectarian and multi-ethnic armed force, the scene is dominated by one of a number of different forces depending on where one is in Iraq. While hundreds of Sunni tribesmen have played a role in the Tikrit offensive, currently it is more symbolic than of any real strategic value. There are plenty of Sunni tribes that are anti-ISIS and support Baghdad's efforts, but by and large, the Sunni position from the pre-ISIS days has not been drastically addressed.

Sunnis continue to view the Baghdad political chambers and its Shiite-dominated security apparatus with distrust and resentment. It is easy to forget that ISIS strolled into town amid widespread Sunni protests and continued clashes in the traditionally problematic Anbar province. As the combined Iraqi force slowly makes progress around Tikrit, there is a growing danger of a wider sectarian divide. Crucially, the liberators must be separated from the eventual protectors. If the Sunnis do not lead the protection and control of their heartland then this is a recipe for disaster.

Iranian-backed militias on the Sunni doorstep simply echo the sentiments that led to the Sunni welcome from some sections as ISIS blazed into town. In fact, the Iraqi Sunni tribal and various Baathist forces became so blended with the ISIS label that it is often misleading when attacks merely become tagged as against ISIS. There is a danger that sectarian atrocities could be committed under the banner of banishing ISIS evil. The Sahwa militia, also known as the Sunni Awakening movement or Sons of Iraq, which drove al-Qaida out of Sunni hotspots, is an example that Sunnis can be enticed into the fold. But the success of the Sahwa initiative was greatly diluted as Sunni tribal forces were not sufficiently embedded within the national security apparatus and the opportunity to lure Sunnis into a greater political role was lost by Baghdad.

Even as the anti-ISIS coalition is playing no part in the key offensive against ISIS in Iraq, the U.S. has tried to brush off Iranian involvement in the battle for Tikrit, but this fact is not lost on weary regional powers. Saudi Foreign Minister Saud al-Faisal pointed to the offensive in Tikrit as the prime example of the anxiety of Gulf states regarding Iran "taking over" Iraqi forces. With the U.S. in deep negotiations with Tehran over the curbing of its nuclear program and concern from regional powers that the U.S. is softening its stance on Iran, regional anxiety is hardly soothed.

In the words of U.S. General Martin Dempsey, chairman of the Joint Chiefs of Staff, the hodgepodge of Iraqi Humvees and various vehicles that darted toward Tikrit like "rush hour on the Washington Beltway," will ultimately overcome ISIS forces in Tikrit due to their "overwhelming numbers." The U.S. is naturally worried that their enormous investment in eradicating ISIS will be hijacked by Iran, as it increasingly displays its influence and plays a leading role by training militia and providing general arms and increasingly sophisticated weaponry.

Of course, Iraqi forces, in spite of any backing from Iran, would not be anywhere near Tikrit if it was not for the significant U.S.-led anti-ISIS coalition airstrikes. The greater concern for Iraq is whether the common threat of ISIS, where battles rage from the Kurdistan Regional Government (KRG) to the north, Anbar to the West and to the gates of Baghdad farther south, will bring the country closer together or split it even wider apart.

Unfortunately, augmented by the growing political rifts with the KRG, all the signs currently point to the latter. U.S. Defense Secretary Ashton Carter pointed out before: "We've been down the road of sectarianism in Iraq and it's important that the government of Iraq not go down that road again." When you have a significant Shiite militia backed by Iran that is perhaps more powerful than the official state forces leading the road to Tikrit, it is hard not to see that in spite of Carter's warnings, Iraq is going down that road again, and fast.

Tikrit is the all-important dress rehearsal for Mosul. If Iraqi forces get bogged down in a protracted battle with ISIS, or worse, the situation turns into sectarian anarchy, then the battle for Mosul will no longer be Iraq versus ISIS, but Shiite versus Sunni.