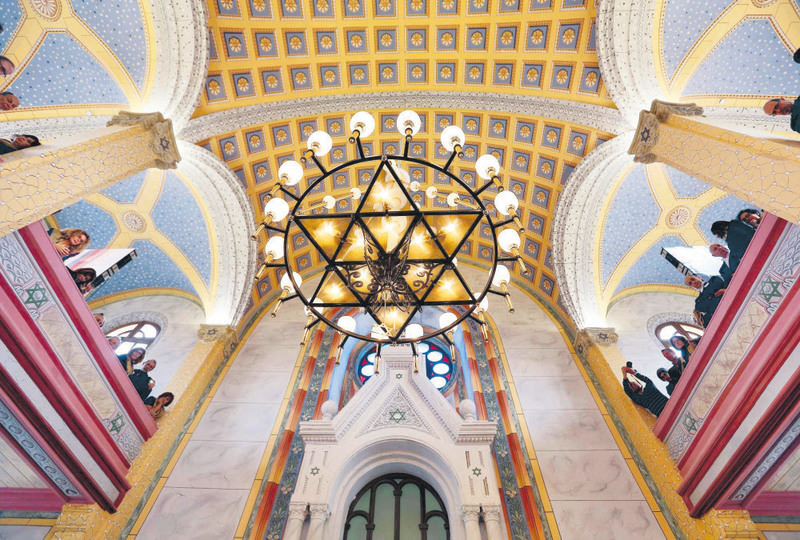 by Ceren Kenar Apr 02, 2015 12:00 am
Like many Turks who were born in the modern Turkish Republic, I learned that once there were non-Muslims living on this land by seeing empty churches, desolate synagogues and ruined graves. Those remnants have always been the bitter yet better teachers of Turkish history than official history course books or Turkish political culture that has parroted the official historiography that was written in accordance with Kemalist ideology and hence, mainly based on lies. Heartbreaking yet honest, these ghost vestiges stand as solid evidence of what the official narrative was doing its best to conceal.


The remnants of the once ruined Great Edirne Synagogue, also known as Kal Kadosh ha Gadol, was my personal tutor on the rich history of my hometown, Edirne, formerly known as Adrianople, a small Turkish city bordering Greece and Bulgaria. The synagogue was built in 1907 on the order of an edict issued by Ottoman Sultan Abdülhamid II after a disastrous fire that destroyed 13 separate synagogues. It became the second-largest synagogue of Europe. The synagogue was abandoned in 1983 as the Jewish community of the town withered. After five years of restoration, the Great Edirne Synagogue was reopened last week with an official ceremony. The streets of Edirne were adorned with banners that read: "Old friends, welcome back home," that greeted hundreds of Jews who visited the city to participate in the opening ceremony of the synagogue. The Justice and Development Party (AK Party) government inaugurated and sponsored the renovation and was proudly present at the ceremony, which marked a historic day for the Jewish community of Turkey.

Years ago when I was a child, the remnants of this synagogue and the old Jewish graves were a playground for me. As a member of a small and harmless gang who called itself "the treasure hunters," we used to lose ourselves in the relics of abandoned churches and synagogues, telling each other ghost stories, playing hide and seek and having fun. Every evening when I returned home I was full of questions about the old inhabitants of these sites and the untold history of the city in which my mother was born.
"There were a lot Jews in this town when I was young. They were good people, we used to like them. I always preferred to shop from Jewish shop owners. Unlike Turks, they were hardworking people. They were polite. While Turkish shop owners huffed and puffed over customers' demands, the Jews would never do that."
"What happened to those people grandma?"
"They left."
"Why?"
"Because their state was founded."
My maternal grandmother, an illiterate yet wise woman, the wife of a peasant and mother of four children, was born in Thessaloniki. My family story was the story of a collapsing empire. My father's ancestors were (probably) forced to abandon Bulgaria after the Balkan Wars due to the persecution of the Muslim population and moved to Çanakkale. My mother's father migrated from Thessaloniki to Edirne with the compulsory population exchange between Greece and Turkey, through which both countries "exchanged" their Muslim and Christian citizens. Approximately 1.2 million Christians from Anatolia and 400,000 Muslims from Greece left their homes and sought refuge in their new countries. My grandmother's family was excluded from the population exchange as Thracian Muslims and Istanbulite Greeks were exempt. Yet, with the rise of fascism in Greece, her family was attacked by racist Greek mobs and was forced to leave their home. She lost her father during those attacks, and in one day her widowed mother with three children became refugees, leaving their land and home, seeking asylum in the young Turkish Republic. "Bad things happened to us my child," was the only sentence I heard from my grandmother about how and why they left their home, who I presume chose to be silent and forgetful as a defense mechanism.

Apparently, the underlying assumption in this report is that only Muslims can be loyal citizens and the ties that link Turkish citizens to the state are nourished by Islam: Muslim identity is seen as an indicator of commitment to the Turkish state, nation and culture.
For Republican ideology, Turkishness is unimaginable and incomprehensible in the absence of Muslim identity. There have been court cases opened against converted Christian Turkish citizens who are charged with "insulting Turkishness" due to their missionary activities. Furthermore, the religious identity of each and every Turkish citizen is marked on their official identity cards from birth, and this fact alone may say a lot about the pivotal role religious identity plays in determining the relation between citizens and the state. These examples can be multiplied through additional study of the legal and administrative structure of the Turkish state. Moreover, it is possible to conclude that the "imagined community" of the Kemalist reformers, and indeed the succeeding cadres, was composed of Muslim Turks and neither non-Muslims nor non-believers were ever considered as a part of this "imagined community."
Times are changing: The formation of a new pluralist Turkish identity?
Contrary to conventional wisdom, the most non-Muslim minority friendly government of Turkish history has been the AK Party government. Curiously enough, while it was secular Kemalist rule that persecuted non-Muslims, the so-called Islamist government has changed attitudes toward non-Muslims for good, marking a twist of fate in Turkish history.
The main reason why AK Party endorsed a new approach towards the non-Muslim issue stems from the party's quest to redefine the limits of Turkish identity. Perceiving the Kemalist ideology as one of the root problems of Turkey and longing for the bygone rich Ottoman heritage, the AK Party government claims to introduce a more pluralist definition of citizenship.
With the new Law on Foundation that was enacted by the AK Party-dominated Parliament, property that was previously confiscated by the Turkish state, worth $2.5 billion, was returned to minority foundations. Several churches, monasteries and synagogues were restored and reopened for religious service with state funds. The Education Ministry has given permission to the Greek community to reopen a primary school on Gökçeada.

Greek Primary School, which was opened in 1951 under the name Aya Todori and closed down in 1964, was reopened for education after a half century.[vi] Many senior AK Party members, including President Recep Tayyip Erdoğan and Prime Minister Ahmet Davutoğlu, have admitted the wrongdoings against non-Muslims in the past, promising a new and brighter future. Calls to the non-Muslims who were forced to leave Turkey were reiterated several times, an official condolence was issued for the Armenian genocide and the scope of Turkish diaspora was officially redefined to include former Ottoman subjects. Etyen Mahçupyan, a well-known Armenian intellectual, was appointed as Davutoğlu's senior advisor, becoming the most senior non-Muslim official in the Turkish Republic. This year Turkey commemorated the tragedy of the Struma for the first time, and the Holocaust ceremony in 2015 was very different from the previous ones thanks to high-level governmental representation.
While the representatives of non-Muslim communities in Turkey cherished these developments, the opposition blamed the government for betrayal. Harutyan Harun Şanlı, a member of the Armenian Community Foundations Solidarity Platform Coordination Board, said: "Especially the AK Party tenure has been a milestone for minorities," while İvo Molinas, editor-in- chief of Şalom newspaper, said: "The vantage point of the AK Party governments toward non-Muslims and their foundations in line with contemporary democratic norms is a silent revolution and should be acknowledged as the starting point of ending the everlasting discrimination and alienation experienced on our soil."[vii]
The Republican People's Party (CHP) and Nationalist Movement Party (MHP) staunchly opposed the Law on Foundation that was proposed by the AK Party government. Rahmi Güner, a CHP deputy, said: "It is a shame to bring this bill to Parliament," while other CHP deputies claimed that the law was "an intrusion into Turkish sovereignty" and portrayed minorities as agents of foreign powers or as a threat to national unity.[viii] A series of books claiming that the founders of the AK Party were crypto-Jews, including "Musa'nın Çocukları: Tayyip ve Emine" (The Children of Moses: Emine and Tayyip), "Musa'nın AKP'si" (Moses's AK Party) and "Musa'nın Gülü" (The Rose of Moses), became bestsellers in Turkey.
That being said, it should also be noted that there are some AK Party members and pro-government pundits who have anti-Semitic views and employ discriminatory language against non-Muslims. There are also demands from the non-Muslim community that are still waiting to be fulfilled. The opening of the Halki Seminary on Heybeliada is one of these demands. The school curriculum and course books that were designed in toe with Kemalist ideology need sweeping reform and revision. Turkey's discriminatory and degrading remarks on not only non-Muslims, but also Kurds and Arabs, should be expunged and these groups should be depicted as among the founders of Turkish culture and real citizens of the Republic. Turkey should adopt a new stance on the Armenian genocide and face the dark pages of its history.
It is definitely not possible to undo a painful history, to bring back what is lost. Yet it is possible to pay tribute to the real owners this country. Last week an important step was made in this direction, raising hopes that the government will pursue more.
[i] These numbers are provided by Naim Güleryüz, a researcher on the history of Turkish Jews http://vatankitap.gazetevatan.com/haber/23_bin_839dan__ikiye_dusen_edirne_yahudilerinin_tarihi_/1/23729
[ii] http://ejts.revues.org/2903
[iii] See http://www.hips.hacettepe.edu.tr/nbd_cilt25/mutlu.pdf for a detailed study on the non-Muslim population and population census in the late Ottoman period
[iv] See Soner Çağaptay, Islam, Secularism, and Nationalism in Modern Turkey : Who is a Turk? (London and New York: Routledge, 2006).
[v] For more details on these cases see Esra Özyürek, "Christian and Turkish: Secularist Fears of a Converted Nation", Comparative Studies of South Asia, Africa and the Middle East 29, no.3 (December 2009)
[vi] http://www.dailysabah.com/opinion/2014/07/05/the-ak-party-and-religious-minorities
[vii] http://www.dailysabah.com/opinion/2014/07/05/the-ak-party-and-religious-minorities
[viii] http://www.turkishreview.org/reports/the-secularist-and-nationalist-oppositions-view-of-non-muslim-minorities-in-turkey_540761