The AK Party and religious minorities 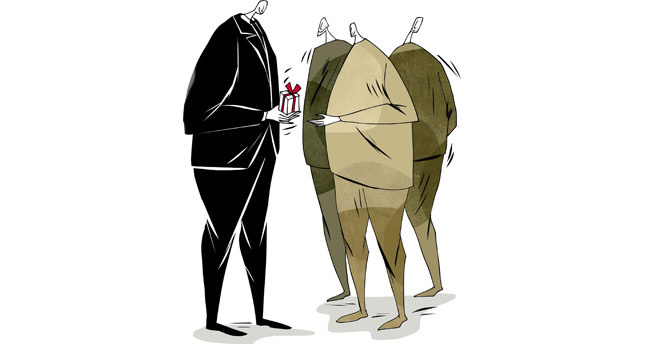 by Bilal Macit Jul 05, 2014 12:00 am
"We will remove the foreigners dominating our market and hand over the Turkish market to Turks." This is how 1942-1946 Republican People's Party (CHP) government's Prime Minister Şükrü Saraçoğlu described the purpose of the capital tax introduced in 1942. These words explicitly summarize the approach toward the Turkish Republic's non-Muslim citizens by the CHP and the Kemalist ideology governing the state during the era of single-party rule: a totalitarian state mentality of policies to standardize society and create a homogenous nation by ignoring all diversity. Citizens of different religions endured some of the most discrimination from such policies – Armenians, Assyrians, Christians and Jews – those who did not qualify as the system's definition of a proper citizen were considered as a threat.

In 1934, 15,000 Jewish residents had to leave their cities and even their country of residence as a result of the systematic pogroms against the Jews living in the Thrace region. In 1942, the capital tax law was introduced. According to this law, minorities constituting 1.98 percent of Turkish population according to the 1935 census were charged with 87 percent of the taxes accrued. The real aim was to reduce the influence of the minority communities and the elimination of their dominant status from the economy. In 1955, Greeks in particular had become victims of serious oppression as a result of the plunder and ravage movement, which is known as the Events of Sept. 6-7. In 1962, a Provisional Commission on Minorities, which was tasked to "track all transactions of minorities contrary to the national security," was established with a confidential memorandum. This commission was established to monitor the activities of non-Muslims and it served as the modus operandi of the systematic discriminatory policies. In consequence of such policies, thousands of residents had to leave their country, their goods were seized, and their schools and sanctuaries shut down.

In 2002, the Justice and Development Party (AK Party) became the ruling government with the support of Turks, Kurds as well as members of non-Muslim minority communities. Since the party took office, the government has pursued reforms aimed at democratizing the totalitarian state while being exposed to severe attacks and facing many allegations. The most striking attacks came from the groups who consider themselves the modern face of the nation. This segment of Turkish society claimed they were the Western side of Turkish society simply due to their secular lifestyle.

They accused Prime Minister Recep Tayyip Erdogan and his wife of being secretly being Jewish – as if being a Jew is an offence. Based on these claims, a book titled "The Children of Moses: Emine and Tayyip" (Musa'nın Çocukları: Tayyip ve Emine) was published. It was followed by other books titled "Moses' AKP" (Musa'nın AKP'si) and "The Rose of Moses" (Musa'nın Gülü) with the purpose of depicting the AK Party and President Abdullah Gül as secret Jews. These books occupied the bestseller section in major bookstores in Turkey such as D&R, which today has on display books praising the Gezi protests. There was even propaganda that claimed the symbols representing the old Turkish state at the headquarters of the AK Party was actually the Star of David.

Despite facing with these notorious allegations and attempts to discredit his party, PM Erdoğan was brave enough to employ policies and initiate reforms that empower the non-Muslim communities in Turkey. As a result of the Law on Foundations, introduced in 2008, property worth $2.5 billion (TL 5.3 billion) was returned to minority foundations. Minister of Culture and Tourism Ömer Çelik made a call saying "You can return back to your country" – alluding to the Christians and Jews, who left the country due to some mistakes in the past. On Feb. 26, 2014, the lands of the Mor Gabriel Monastery located in Mardin, which was earlier confiscated by the Turkish state, was returned to the Syriac community. This return marked the largest restoration of property in Turkey's Republican history in terms of size, amounting to 24.4 hectares. Also restored by the Ministry of Culture and Tourism, Akdamar Church in Van and Sumela Monastery in Trabzon were opened for religious services.

Furthermore, the Ministry of Education has given permission to the Greek community to reopen the Greek Primary School on Gökçeada. This school was founded in 1951 under the name Aya Todori, then closed down in 1964 and finally reopened for education right after half a century from its inception. Moreover, last May, the construction of a new school was initiated by Armenians for the first time in the Republican era. This became possible with the law that enabled the return of lands belonging to foundations that were previously confiscated by the government. In addition, the AK Party government has decided to promote publications from minority communities through providing financial support. In line with this, newspapers published by minority groups are now allowed to receive and publish official advertisements after 29 years.

The Turkish Grand National Assembly Constitution Reconciliation Commission invited Patriarch Bartholomew I of Istanbul and two priests, as well as Kuryakos Ergün, chairman of the Midyat Syriac Orthodox Mor Gabriel Monastery Foundation, and Rudi Sümer, an attorney for the foundation, in order to consult with them in the policy making process. Patriarch Bartholomew stated that it was the first time in the Republican era that an official invitation had been extended to non-Muslim minorities. Another 'first in the Republican era' was experienced when Prime Minister Erdoğan issued a message on April 24, 2014. His message concerning the 1915 Armenian events, which was published in nine different languages, including Armenian, contained statements such as, "Any conscientious, fair and humanitarian approach requires an understanding of all the suffering endured in this period, regardless of religion or ethnicity … Expressing different opinions and thoughts freely on the events of 1915 is the requirement of a pluralistic perspective as well as of a culture of democracy and modernity." This unprecedented statement marked a historical change in the Turkish state's approach to the 1915 events.

Statements by representatives of minority groups regarding these recent developments demonstrate the shift in state policy more precisely. Laki Vingas, minority foundations representative for the Directorate General for Foundations, stated, "We are pleased that it is now possible for our children to not be born politically indebted. We have now seen that it is not something to be scared of to get in contact with the state." Harutyan Harun Şanlı, a member of the Armenian Community Foundations Solidarity Platform Coordination Board said, "Especially the AK Party tenure has been a milestone for minorities. We used to need to get permission from the minority desk even to pound a nail in our church. It has all been overcome gradually since 2003." İvo Molinas, chief editor of Şalom newspaper said, "The view of AK Party governments toward non-Muslims and their foundations in line with contemporary democratic norms is a silent revolution and should be acknowledged as the starting point to ending the everlasting discrimination and alienation experienced on our soil. The restitution of the rights of non-Muslim foundations thanks to the laws adopted in 2003 and 2008 has been a very significant historic milestone."

Today, referring to the restitution of foundation assets, Mr. Erdoğan says, "These assets are not mine! So it's my fundamental duty to return them to their owners." He assesses the restitution of rights and reputation as a requirement of equal citizenship – law and justice – as opposed to the condescending attitude of the opposition. While doing this, he assumes risk contrary to the cautious state of mind stemming from the government and confronts criticism and exorbitant accusations that could even be considered conspiracy. All in all, an outburst by a former CHP parliamentarian toward AK Party members is still remembered: "You keep defending Agop's possessions, please at least once defend Mehmet's possessions." It should also be remembered that the Law on Foundations issued by the AK Party government in 2006 was partially vetoed by then President Sezer on the grounds that it was against national interests. Furthermore, this year a member of Parliament from the Nationalist Movement Party (MHP), in reaction to the restitution of foundation assets said, "We will take them all back."

There is no such thing as a perfect democracy in the world as there are always deficiencies and more things to be done. For instance, the opening of the Theological School in Heybeliada is one of the present demands expected to be fulfilled in the future. What matters and what makes these processes functional is the demonstrated will to find a solution and the gratitude shown in return. Today, the AK Party and Erdoğan are pointed to by the very interlocutors of the problem as they address the solutions regarding the demands of non-Muslim citizens. Erdogan returned the assets of Christians and Jews previously confiscated by the state, published a message of condolences to Armenians for the 1915 Events, allowed the reopening of minority schools and monasteries, and enacted laws for combating hate crimes and discrimination. To our Western friends who declare the AK Party government as radical Islamists, ISIS supporter, anti-secular and authoritarian: We will pray for the removal of the curtains of prejudice from your eyes during the month of Ramadan.