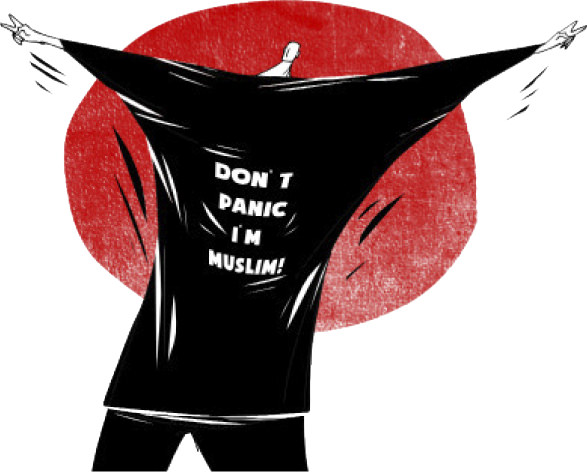 Today, the West consolidates its position as the Universal Observer within the context of Islamophobia, by strictly dictating its terminology. Hence, Muslims inevitably become the observed and as a result, constantly problematized and held subject to certain analyses

A recent essay in The Atlantic caused a stir by suggesting - contrary to constant pleas by Muslims - that in fact ISIS was not only Islamic, but very much so. Given its constant references to and reliance on the Quran and other Islamic texts, author Graeme Wood suggests, groups like ISIS are the most authentic representation of Islam: they are its true bearers, and those denying such a plain fact have a "cotton-candy view of their own religion." It is certainly not the first time we hear such arguments made by those who wish to demonstrate a causal link between Islam and terror. It will likely not be the last. The article received the expected reception: touted as confirmation of an increasingly indisputable fact from some camps, and derided as incoherent ignorance and arrogance from others. Also as expected, the article was refuted by multiple prominent figures, who took particular umbrage at the fact that their religion was being portrayed as inherently violent. Salon published a response by prominent U.S. figure, Haroon Moghul, who accused The Atlantic of creating a "big Islam lie," and instead shone a torch on what Muslims really believe about ISIS. Sheikh Dr. Yasir Qadhi, a prominent U.S. theologian also penned a lengthy response, demonstrating how ISIS had little to do with Islam's true teachings by asking, "what is 'Islamic?' " Journalist Mehdi Hasan announced on Facebook that The New Statesman was set to publish his long, 5,000 word rebuttal on the front page of their next edition, entitled, How Islamic Is The Islamic State? Muslim scholar, Hamza Yusuf, asked for his thoughts on Wood's claims that ISIS is very Islamic, stated, "It's not Islam; it's a perversion of Islam, and to label these militant externalities as Islam is to legitimize their actions." Even the Queen of Jordon, Queen Rania, chimed in, proclaiming, "I would love to drop the first 'I' in ISIS because there's nothing Islamic about them". Throughout the entire hubbub that the article created, the spotlight seldom shifted away from Islam and Muslims: ISIS are Islamic. No they're not. Yes they are. No they're not; The Quran is violent. No it's not. Yes it is. No it's not...

Lost amidst the slippery pursuit of "what ISIS wants", or for that matter, "what Islam wants", are the productive achievements of this accusatory process itself: What do Islamophobes want? Or more precisely, what does Islamophobia do in this particular entanglement? Our clue might come from an unlikely source. French philosopher Michel Foucault, in his influential work on sexuality shortly before he died, offered some fresh insights into the workings of power in contemporary society. In particular, he challenged the repression hypothesis, which suggested that power had repressed sexuality for so long that the latter, owing to this repression, began to manifest in unusual expressions: phallic architecture, jokes, slips of the tongue, dreams and so on. Foucault did not disagree with the fact of repression per se. Rather, it was his contention that repression was but one tactic employed by power, and that the productive potential of power was at least equally as important to understand as its repressive capacity. Owing to a particular Christian tradition that demanded faithful subjects confess the truth of their sins, Foucault argues, Western societies have come to view truth not as something coerced out of a subject by power, but as an act of freedom and resistance against power: "it seems to us that truth, lodged in our most secret nature, "demands" only to surface; that if it fails to do so, this is because a constraint holds it in place, the violence of a power weighs it down, and it can finally be articulated only at the price of a kind of liberation. Confession frees, but power reduces one to silence; truth does not belong to the order of power, but shares an original affinity with freedom." Foucault demonstrates, rather, how through a complex set of mechanisms and procedures, subjects are brought to speak their truth - of their sins, or sexuality - at the direct behest of power, not as an act of resistance to it. Discursive truth, Foucault shows, is a by-product of power and not external to it; in fact, the latter depends upon it for its sustenance and expansion.

This "incitement to speak" or confess one's truth would lead to increased interventions of the workings of power into the 'resisting' subject: the more sexuality was scrutinized as a subject of discourse, the more closely it was managed and controlled. Hence it was not simply attacks against sexuality that did the work of power, but also defenses - any analysis that focused on sexuality as its object was a mechanism of increased control. Thus, the self-expression of sexuality as a form of resistance was part and parcel of this program and did not challenge the position of sexuality as center-stage. Turning back to the debate in question, we might come to see it less as a two-sided brawl and more as an incitement, a provocation for Muslims to come forward and 'clarify' their truth: about their religion, about themselves. The inciter, in this case The Atlantic article, but at other times other articles, generalizations, exaggerations, half-truths, stereotypes - taunts the invitee to step forward, embrace the challenge and reveal the truth. Many Muslims, as those mentioned above, take this incitement at face value and perform their truth acts publicly and proudly: ISIS betrays the Quran; Muslims denounce ISIS; Islam is really peaceful, tolerant. The veracity of these pronouncements aside, each of these statements are confessions of a truth that has been prompted by the initial gesture of accusation, misinformation and ignorance.

Importantly, the provocation disguises itself not as a demand for speech, but as a viscous attack or innocent ignorance. The responses it is designed to elicit are hence denied as conformities and recast instead as resistances; difficult speech acts requiring immense courage to carry out. While it is certainly true that one places oneselves at risk by refuting certain groups (Dr. Yasir Qadhi spoke recently of being threatened by ISIS), we ought to interrogate more thoroughly exactly what type of courage is employed when 'speaking back' accords so cleanly with the demand to speak. The content of these responses thus needs to be seen as secondary in this question-and-answer game. The strength or weakness of the rebuttal is not what matters so much as the fact of the rebuttal itself, the continued participation in this game of suspicious Muslim, of the Muslim as the question that requires constant answers. It matters little how well one is equipped to enter this arena: this is a joust whose condition of entry is defeat.

If we think of Islamophobia less as a hostility towards, or ignorance about Muslims and Islam, and more as an unwarranted scrutiny of these subjects, we can garner a greater appreciation of the work that it is constantly being done, often with our unwitting buy-in. We can hence re-evaluate our own position in relation to this violent discourse: is ours a resistance, or merely an oppositional conformation? Shifting our focus away from a defense of the truth of Islam and Muslims, onto Islamophobia itself, we will find that one of its strategies for keeping Muslims on the dock is the coercing of truthful speech: of clarifications, rebuttals, demystifications, condemnations and the like, of the sort carried out in this latest bout of 'corrections' about Islam and Muslims. In short, keeping Muslims and Islam the topic of consideration ensures the interventionist aims of power are always present.

In this debate about the Islamic authenticity of ISIS, the terms of the discussion - ISIS, Islam, Muslims, violence, terror - are unchanging. The positions taken towards them differ greatly, but their position as center-stage, warranting intense scrutiny, remains unchallenged. Three decades after Edward Said's Orientalism exposed the fundamental mistakes underpinning Western knowledge about Muslims and Islam, the benefit of 'mere ignorance' on the part of Islamophobes is too generous to be taken seriously. The placing of Muslims under the microscope, the constant accusations against their faith, their loyalties, their very humanity, is no mere accident or innocent ignorance. It functions to unleash a world of knowledge-production about the Muslim that sustains and continually expands interventions into their lives. This intense scrutiny of Muslims leads to a hyper-management of almost every aspect of their existence.

The problematizing of sexuality that Foucault examines became so pervasive from the 18th century onwards, that it came to be incorporated even into the design of schools so as to carefully manage the lives of those with an 'abnormal' sexuality: "The space for classes, the shape of the tables, the planning of the recreation lessons, the distribution of dormitories, the rules for monitoring bedtime and sleep periods - all this referred, in the most prolix manner, to the sexuality of children."[2] Today the Muslim is built into so many structures that an untrained eye may well miss their presence: airports and planes, trains and platforms, school-grounds and curriculums, foreign-policies and sniper rifles, political speeches and election campaigns, television shows and Hollywood blockbusters all incorporate the Muslim-as-a-problem into their design, with varying aims to monitor, prevent, entrap, integrate or eliminate. The Muslim is replicated in the shape of the drone missile and imagined in the design of the surveillance camera.

It would be a mistake to detach this control of Muslim life from the 'truth' that is constantly sought about Muslims and Islam, such as the example under consideration in this article. There is thus a case to be made that Muslims move beyond a medieval notion of power that exclusively - or even primarily - suppresses and condemns to silence, toward a recognition of a more complex economy of power that entices towards speech perhaps more than it silences; one that lures its prey towards verbalizing the truth it requires for its efficacy. Only then we might begin to see the ends of the cat-and-mouse game that has been Muslim politics since September 11. Power in this sense can be seen less as an obtrusive, crushing force, and more as an accommodating, smooth driver that directs our gaze upon a particular path, utilizing us as its vehicle while convincing us all along that we are in fact resisting. Like placing a lab-rat under a microscope, it is the observer who will direct the course of the investigation, determining which questions are examined and which ignored, which bodies are interrogated and who is doing the interrogation. The observer will direct our gaze. That is power. The discourse of Islamophobia, within which the Muslim is consistently problematized, ensures that we remain unable to challenge our position as observed and the position of the Westerner - Graeme Wood in this case - as the Universal Observer. Wood set the parameters of this discussion and it was simply propelled through mutual oppositions of yay and nay. In the weeks following the controversial Atlantic article, Wood's arguments have well and truly been refuted; only those heavily invested in the idea would still accept that ISIS is Islamic. But is that the only thing that has been achieved? The parameters of the discussion remain unchanged and unchallenged. We are still discussing Islam, Muslims, violence and terror in the same sentence. We are still under observation.

Ph.D. candidate in Crimonology and Law at the University of Melbourne