The double standards of genocide denial in Cyprus 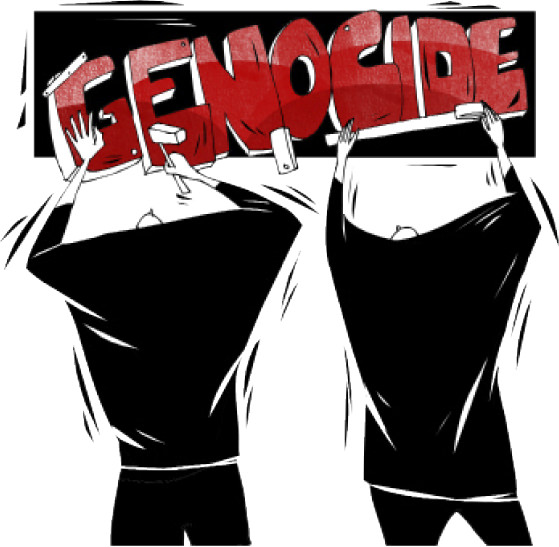 Recently, the Greek Cypriot House of Representatives has passed the bill outlawing the denial of the so-called Armenian genocide. Interestingly, the timing of the new legislation came as the stalled peace talks between Turkish and Greek Cypriots were set to resume

On Thursday April 2, 2015, I woke up, washed my face and went to work as I would do any other day of week. Little did I know that by the time I came back home in the evening, I would become a fugitive in my own homeland. I did not do anything that day I did not usually do, nor did I say anything I would not usually say. Rather, the thing that made me a criminal, according to the Greek Cypriot government, was an opinion I held. During the course of the day, it was decided that I could no longer deny that a particular incident that took place a century ago was genocide.

As a Turkish Cypriot writer and academic, I now face the possibility of being arrested, charged, fined 10,000 euros and sentenced to five years in prison upon entering Greek Cypriot-controlled territories south of the U.N. buffer zone, simply because: I refuse to confirm the so-called Armenian genocide until I am presented with clear, convincing, unbiased research demonstrating that 1.5 million Armenians were indeed systematically killed by the Ottoman Empire in 1915 as is claimed.

The bill to outlaw the denial of all genocides recognized unanimously by the Greek Cypriot House of Representatives was passed by a parliament that did not include a single Turkish Cypriot, even though the constitution upon which the internationally-accepted Republic of Cyprus was founded, states that 30 percent of its members should be representatives from the Turkish Cypriot community. Had the constitutionally legitimate parliament not collapsed in 1963, it is highly unlikely that the House of Representatives would have unanimously recognized the Armenian genocide, and even if it had, the bill would have most probably been vetoed by a Turkish Cypriot vice president.

The timing of the new legislation came as the stalled peace talks between Turkish and Greek Cypriots were set to resume. However, this bill sent a clear message to Turkish Cypriots before talks even restarted. It not only warns Turkish Cypriots that they will face punishment for following Turkey's official line on the matter, but also that the Greek Cypriot side values its 2,500 ethnic Armenian citizens more than its 100,000 Turkish Cypriot citizens.

Although the denial of the Armenian genocide is not specifically outlawed, the fact that the parliament voted for the bill during a visit to the island by an Armenian delegation indicates the political motive behind it. Greek Cypriot High Commissioner to the U.K., Euripides Evriviades, also failed to answer my request for a list of genocides unanimously recognized by the House of Representatives so that I may be aware of which other genocides the bill covers.

So instead, I have decided to propose another genocide for the Greek Cypriot government to recognize, if they do not already. Perhaps the ethnic cleansing of tens of thousands of Turks from Morea by Greeks throughout the 19th century would be a good place to start. In 1897, historian W. Alison Phillips wrote of the Massacre of Tripolitsa in 1821, when some 32,000 Muslim and Jewish civilians were slaughtered by men loyal to Greek General Theodoros Kolokotronis.

Phillips wrote: "For three days, the miserable inhabitants were given over to lust and cruelty of a mob of savages. Neither sex nor age were spared. Women and children were tortured before being put to death. So great was the slaughter that Kolokotronis himself says that, from the gate to the citadel his horse's hoofs never touched the ground. His path of triumph was carpeted with corpses. At the end of two days, the wretched remnant of the Muslims were deliberately collected, to the number of some two-thousand souls, of every age and sex, but principally women and children, were led out to a ravine in the neighboring mountains and there butchered like cattle."

Historian William St. Clair also described the horror of that event: "Prisoners who were suspected of having concealed their money were tortured. Their arms and legs were cut off and they were slowly roasted over fires. Pregnant women were cut open, their heads cut off, and dogs' heads stuck between their legs. From Friday to Sunday, the air was filled with the sound of screams. One Greek boasted that he personally killed 90 people. For weeks afterwards, starving Turkish children running helplessly about the ruins were being cut down and shot at by exultant Greeks. The wells were poisoned by the bodies that had been thrown in."

Turks were also almost completely erased from Thessaly and Crete by the beginning of the 20th century, while Greeks invading western Anatolia during the Greco-Turkish War between 1919 and 1922 burned hundreds of villages and massacred tens of thousands of civilians in the hope of realizing their pan-Hellenic "Megali Idea" (Great Idea) of establishing a Greater Greece. The then-U.S. Vice Consul to Istanbul, James Loder Park, described the destruction in the province of Manisa: "Cassaba was a town of 40,000 souls, 3,000 of whom were non-Muslims. Of these 37,000 Turks, only 6,000 could be accounted for among the living, while 1,000 Turks were known to have been shot or burned to death. Of the 2,000 buildings that constituted the city, only 200 remained standing. Ample testimony was available to the effect that the city was systematically destroyed by Greek soldiers, assisted by a number of Greek and Armenian civilians. As we examined the ruins of the city, we discovered a number of skulls and bones, charred and black, with remnants of hair and flesh clinging to them."

Of course the Greco-Turkish War was just one of many wars within the context of World War I, which according to researcher Kamer Kasim, claimed the lives of around five million Ottoman Muslims on a number of fronts, including the Aegean, the Balkans, the Caucasus and eastern Anatolia. Unfortunately, however, we will never know the true figure of Muslim Turks massacred and exiled from the European continent during the gradual fall of the Ottoman Empire, but it is certain to run into the millions.

In fact, it could even be argued that the establishment in 1955 of the Greek Cypriot militant group, the National Organization of Cypriot Fighters (EOKA) and its bloody campaign to rid Cyprus of its Turkish Cypriot population, was a continuation of a greater war that began in 1821. After all, were not the 126 defenseless Turkish Cypriot women, children and elders who were brutally massacred in the villages of Maratha, Santalaris and Aloda on August 14, 1974 killed for the same "Megali Idea" as their fellow Turks in Morea, Crete and Thessaly? Was it not Greek Cypriot President Archbishop Makarios III who in 1964 warned: "If Turkey comes in order to save Turkish Cypriots, Turkey will find no Turkish Cypriots to save," after Turkish Cypriots were forced out of the government?

The list of atrocities carried out against Turks in the name of pan-Hellenism is endless, as are massacres carried out against Muslims in former Ottoman lands by Serbs, Romanians, Bulgarians, Russians and Armenians from the early 19th century until the breakup of Yugoslavia in the 1990s. This, of course, does not justify the slaying of civilians by Turks during this period, and I, just like the Turkish government, accept that a large number of Armenian civilians died during the incidents of 1915. However, I stand by my position that only a joint investigation by both Turkish and Armenian researchers can truly determine whether or not these incidents can be classed as genocide.

If findings from such research suggests that the genocide of Armenians did indeed take place, I would be among the first to welcome the outcome, as would the Turkish government, but I am sure findings would also suggest Turks in eastern Anatolia were victims of genocide as well, carried out by Russian-backed Armenian militias. In the meantime, we should not allow the political propaganda of lobbying groups to write history for us, and we certainly should not be pressured into passing laws in violation of Article 10 of the European Convention on Human Rights that will only curb academic debate.

Nonetheless, I believe it is safe to say that there is not a single people alive today who are not living at the expense of another people they wiped out hundreds, if not thousands of years ago. Whether it is the Holocaust in World War II, the annihilation of Native Americans, the erasing of the Aborigines in Australasia or even the ethnic cleansing of the Celts at the hands of the Anglo-Saxons, all genocides should be condemned equally. However, instead of mudslinging over incidents in the past that we are all guilty of, thereby dividing the world on old civilizational fault lines, we should treat such incidents as lessons that only bring civilizations closer together in order to prevent them from happening again, just like 100 years of mourning the tragedy of the Battle of Gallipoli has united the hearts of Turks and Anzacs.
Last Update: Apr 20, 2015 10:34 pm
RELATED TOPICS