Syrian revolution: Beginning of the end 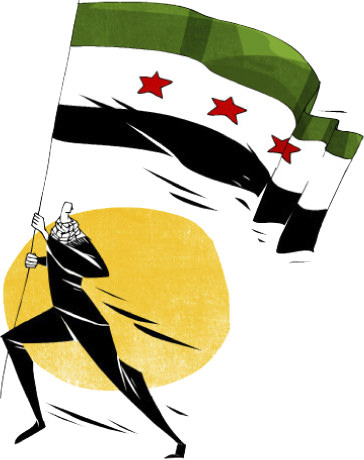 It has been almost four years now since the people of Syria started to fight for freedom and dignity against a brutal regime. They are still determined despite receiving very limited support and media coverage from the world

In the middle of the spring of 2011 when the blossoms were in full bloom, in the hearts of the Syrian people bloomed the strong desire for a much longed-for freedom from the hands of the atrocious regime. The winds of hope that had traveled across Tunisia, Libya, Egypt and Yemen had now made its way into the land of one of the oldest civilizations, Syria. This wind picked up pace and soon became a massive storm with a mission of the Syrian brave hearts to totally uproot and obliterate the homicidal regime. Their ambitions were great, and so were their hopes, courage and determination to bring it to fruition.

On a sunny day in March 2011, with their hopes shining bright for the dawn of a new era of change and freedom, a group of a few young Syrian guys took to the streets. The heart of the land of Syria had been tortured and had been silently bleeding for years. Finally, this silent pain had found its voice, which echoed inside the heart of Damascus in the oldest city market al-Hamidiyah Souq, crying out: "The Syrian nation won't be humiliated!" That was the first spark that ignited the fire of the revolution that soon engulfed the whole nation. This fire, which was burning as a torch of hope in the heart of every Syrian, was a strong, unwavering declaration of the overthrowing of a tyrannical regime.

When the whole of Syria was revolting, calling for freedom and for the end of the criminal regime, the international powers paid no heed to the very obvious signs of the impending catastrophe. They did not allow their media to show the brutal reality and the concept of freedom that all Syrians had asked for and wanted and the reasons for the uprising. On the contrary, it was regime supporters who were given precedence across all kinds of media. With their meager resources, the Syrian revolutionaries tried to reach out to the world through the very limited media they had access to. But it was all in vain, as there were no ears to listen to the truth and no hearts to realize the pain inflicted on innumerable innocent Syrians. Even after four gruesome years of bloodshed, the cold-blooded murder of countless innocents and the sufferings of all those who have been made homeless, it is shocking to find the international community raising the same question in their own media of what Syrians want.

On the one hand, the international powers have well understood the kind of freedom demanded by such nations as Libya, Egypt and Yemen where the whole world had responded within a month. They still do not comprehend the meaning and the essence of the Syrian people's desire for freedom. As for Syrian freedom, it was very palpable in its quality, meaning and every other form of comprehension and description through the work of great Syrian artists and writers in their songs, writings, paintings and clear opinions forthrightly expressed. The Syrian people asked for the total overthrow of the regime. Not partial, but total. So behind the scenes, power plays and politically-motivated manipulations of the international powers that were all evidently pro-regime were all refused by the Syrian people.

This regime, which has its roots in the early 1960s, consisted of a group of army officers who led a coup against the democratic government and the first constitution in the Arab region. They called themselves later the "Heroes of March 8, 1963." It was then decided that the Zionist agent, the descendant of the Magi, Hafez Assad, was to rule as the autocratic general leader in all aspects of authority in Syria. This privilege came as a reward for his job of delivering the Syrian Golan Heights to Israel, betraying the Arab armies, and for his loyalty to Israel exchanged in return with the favor of keeping him and his family in power.

The situation has not changed since then. After the death of Hafez, the Zionists handed power over to his son, Bashar Assad, who was already considered half-crazy. After tasting power served to him on a silver platter, he became fully insane. He issued a series of laws for him and the members of his family, totally destroyed Syrian society, made the poor poorer, and finally non-existent, and filled his personal coffers enriching himself more and more. He did not issue even one law that made any positive changes, progress or gave any liberty to his countrymen. Prisons were full of revolutionary politicians, writers, journalists and opinionated leaders from the community. The regime became a terrorizer of the Syrians. There was the removal of subsidies for all essential materials in Syria. The Syrian pound was losing value every day and then it doubled in price, affecting the Syrian business sector very badly. All of this can be solely attributed to Assad's family's "wise" decisions. He and his family monopolized every public aspect of the state media and also the political, economic and military functions.

To this day, so many people in the world are ignorant about the actual reasons leading up to the Syrian revolution. They do not know how the regime had captured and was controlling all aspects of the lives of Syrians in a total autocratic way. The regime was creating and showcasing to the outside world an image of Syria that it wanted the whole world to believe, and never the actual, bitter reality that existed. It succeeded because of the dispersion of the Syrians and international powers covertly supporting the regime.

The Syrian people revolted numerous times during the continuous rape of their homeland at the hands of the tyrannical regime. All they got in return was murder and abuse and total media blackout to suppress their revolutionary ideas and attempts. Perhaps the most notable setbacks of the Syrian people's revolutions took place in Hama in the 1980s, which was flattened in a very short span of time. Here, one of the most horrifying acts of violence against innocent civilians was witnessed with the use of heavy artillery for a whole month to kill more than 20,000 people. Nearly two-thirds of the city of Hama was totally obliterated. At that time, the country had a population of nearly eight million that was rampantly and indiscriminately shelled, killing countless innocents and destroying city after city.

All of this was only possible with the cooperation of the U.S. State Department at the time, and with the support of the traitors in the form of Arab rulers who did not lift a finger to intervene. Their actions speak loud and clear that they are here to serve the Jews and are united with them in their aim for one common faith with Hafez Assad and his regime. For all those who could never understand the cause behind the Syrian revolution, they must first understand that it is deplorable for any society to reach a stage where freedom needs to be fought for and cannot be a natural part of existence. Freedom is a right that is essential for life and needs to be inherently present in the social structure. Without freedom, life has no meaning. It is impossible to survive, grow and progress for any society under an unfair, unjust and autocratic despot. This obnoxious, cowardly regime has never stopped killing Syrians on their own soil, assisted by Arab and Western leaders, hand in hand with the sectarian militias brought from all over the world. One can never exclude the central role of Zionist support in all this killing and rampage.

Hundreds of thousands of dead, and prisoners, and millions of displaced people in all the countries of the world, and the main reason is the flawed system and its supporters everywhere.

In the land of Syria, the destruction of man, civilization and history was, and is still, going on unhindered at the hands of this tyrannical regime. Even after four continuous years of war waged by the regime against Syrians and countless loss of lives, the Bashar Assad regime in Syria has still not received any strong opposition by the international community for his barbaric acts of violence.

For the Syrian brave hearts, the struggle for freedom is far from over, and the winds of change that blew one day in the spring of 2011 in al-Hamidiyah Souq refuse to die down until it totally overthrows the despotic regime and ushers in a new era of freedom and hope. Someday, the warm-hearted Syrian people will celebrate their victory, and all the sacrifices made by the brave men and women to achieve this freedom will go down in history as the victory of the people of Syria, the victory of freedom and justice. Until then, the same sentence that started this eventful journey echoes in the heart of every Syrian:" The Syrian nation will not be humiliated!"