The Gallipoli centenary: An Australian perspective 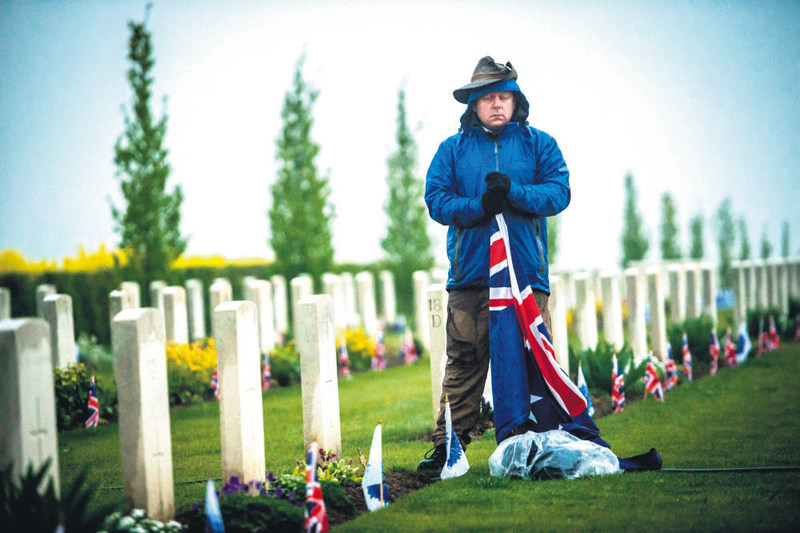 Australians' encounter with Turks on the shores of Gallipoli has elicited no resentment between the two nations. On the contrary, it paved the way for an exceptional friendship as Australians have been welcomed with most sincere regards, each time they visit Turkey on the centenary of the Gallipoli landings

As we mark the centenary of the Gallipoli landings, Turkish readers need no reminding of the importance of this event in the creation of modern Turkey. It was here after all that a certain Mustafa Kemal rose to prominence by successfully defending the peninsula, thus chalking up the first major victory of the crumbling Ottoman Empire during the Great War of 1914 to 1918. Later, of course, he would become Mustafa Kemal Atatürk, the father of the Turkish nation.

Paradoxically perhaps, and what may be less known in Turkey, is the central role that the Gallipoli landings play in the national mythology of modern day Australia and New Zealand. The Australian and New Zealand Army Corps (Anzac) legend remains the centerpiece of Australian nationalism to this day. According to legendary Australian correspondent Charles Bean, who not only covered the Gallipoli campaign but also wrote the official history of Australia's involvement in World War I: "Remote though the conflict was, so completely did it absorb the people's energies, so completely concentrate and unify their effort, that it is possible for those who lived among the events to say that in those days Australia became fully conscious of itself as a nation."

Imperial hubris and the Battle for Gallipoli

The Australian fixation on Gallipoli is, perhaps, somewhat perplexing given that the campaign was an unmitigated military disaster. Indeed, there was never even supposed to be a ground invasion of the peninsula; Winston Churchill had intended a purely naval action. A mighty armada of French and British warships were meant to force the narrow straits of the Dardanelles before sailing to Constantinople to bombard the city, and thus the Ottoman Empire, into submission.

And perhaps it seemed inevitable on March 18, 1915, as no less than 18 battleships approached the narrow straits to bombard the shore defenses. Unknown to the fleet of the Triple Entente, however, and unspotted by aerial reconnaissance, the Ottoman minelayer, Nusrat, had laid an additional line of underwater mines parallel to the shore. As it wheeled to retire the French warship, Bouvet struck a mine and quickly slipped beneath the waves taking some 650 sailors to their watery graves. The British ships inflexible and irresistible were also hit in quick succession, and while the former was able to limp back out to sea, the latter was abandoned. Startled and unwilling to risk any more ships, the attack was called off. Colonel Geehl and the crew of the Nusrat had almost single-handedly saved Constantinople that day and potentially sealed the fate of the entire Gallipoli campaign.

Thus the scene was set for a ground invasion to knock out the shore batteries that would, in turn, allow minesweepers to clear the straits and therefore, the path to Constantinople. The newly minted Anzac troops, who had hitherto generally been making a nuisance of themselves in the bars and brothels of Cairo, were called in to fight alongside their French and British counterparts. The invading forces landed under cover of darkness on April 25, 1915. The bulk of the Australians disembarked at what was later to be called Anzac Cove amid a withering hail of machine gun and artillery fire. The Anzacs were confronted with inauspicious terrain of sandy shale hills, gullies, ravines and ragged cliffs. It was a slaughter, but the Ottomans were woefully outnumbered as the vast bulk of the defending forces were stationed elsewhere under German command.

As a result, the Australians doggedly pushed on toward their objective of Koca Çemen Tepe - the highest point on the peninsula - with the aim of controlling the surrounding area. Realizing the strategic value of the hill, Mustafa Kemal committed the reinforcements under his command to defend it at any cost. Upon meeting Ottoman troops fleeing the battle due to a lack of ammunition, it is reported that he admonished them, telling them that they still had bayonets, and frog marched the fleeing troops back into battle. It was Mustafa Kemal's iron-hard leadership that drove the Australians back in hand to hand fighting and allowed time for reinforcements to arrive. Low on ammunition, reinforcements and basic necessities such as water, the situation looked bleak for invaders after the first day, so much so that senior officers on the ground recommended a full evacuation. General headquarters, however, feared that withdrawal would lead to a massacre. Instead, the commanding general, Sir Ian Hamilton, ordered the Australians "to dig, dig, dig until you are safe." Australian soldiers are still affectionately known as Diggers to this day.

In the eight months of trench warfare that followed the trench lines barely moved even though in some places these were scarcely more than 10 meters apart. As time went on, the troops on each side began to develop respect for the courage of their adversaries. Informal truces broke out. Cigarettes and jam were thrown back and forth across trench lines. A one-day cease-fire was declared for May 24 to bury the bodies as not only was the sight of rotting bodies indecent, but they were also a health hazard. Occasional displays of camaraderie aside though, this was war nevertheless and every attempt to breach enemy lines inevitably ended in slaughter.

A nation rises from the ashes

Despite the carnage at Gallipoli, a variety of emblematic stories worked their way into Australian folklore. Private Simpson and his donkey tirelessly worked to fetch the wounded from the front lines until he too met his untimely end. Chinese-Australian sniper Billy Sing was officially credited with 201 kills. Albert Jacka single-handedly held the line against an Ottoman assault. Australians played a game of cricket on the beach while under shell fire. And then there is the "great escape," or evacuation of 41,000 soldiers at Anzac Cove, that every Australian child knows. Machine guns fired intermittently and were controlled remotely by wires to keep Ottoman heads down. Sappers continued to detonate explosives to signal to the enemy that it was business as usual as the evacuation got underway. Despite all these efforts at subterfuge, 10,000 soldiers still remained on the last day. To cover this last retreat, "drip rifles" were set up - an empty can was tied to the trigger of a gun and a second can with a hole in it dripped water from above until the weight of the first can caused the gun to fire. Whether this actually fooled the Ottoman defenders or whether they neither saw the virtue nor the valor of firing at a defeated and retreating enemy is another question.

Whether these stories are historically factual matters little in the popular imagination - for historians, however, this is another matter. These stories are what the late Eric Hobsbawn called "the invention of tradition" utilized to create and strengthen the idea of the Australian nation. Australia only became a federated state in 1901, prior to that it was a collection of crown colonies with parochial identities. After Gallipoli, ideas of mateship, courage in the face of adversity and endurance became infused in the Australian national consciousness. Gallipoli, in short, is regarded as the crucible of the nation. Consequently, many Australians travel to Gallipoli as a sort of secular pilgrimage.

I visited Gallipoli during my first trip to Turkey back in mid-2004. I vividly recall being struck by how magnanimous and welcoming Turks were to Australians. While this is sometimes forgotten in Australia, let's not forget that the Gallipoli invasion was naked imperialism. The 1916 Sykes-Picot Agreement and the later dissolution of the Ottoman Empire are testimony to this. The Australian armed forces were unashamedly named the Australian Imperial Force.

I still find it nothing short of amazing that Turks continue to welcome Australians to their shores to commemorate Anzac Day at Gallipoli every April 25. I cannot think of any other equivalent where another country allows the commemoration of an imperial invasion on its own shores. This magnanimity is unsurprising, however, if we consider Atatürk's words inscribed on memorials in Canberra and at Anzac Cove:

"Those heroes that shed their blood and lost their lives ... You are now lying in the soil of a friendly country. Therefore rest in peace. There is no difference between the Johnnies and the Mehmets to us where they lie side by side now here in this country of ours ... you, the mothers, who sent their sons from faraway countries wipe away your tears; your sons are now lying in our bosom and are in peace. After having lost their lives on this land they have become our sons as well." The Australian war cemetery located at Lone Pine on the Gallipoli Peninsula is testimony to the sincerity of Atatürk's words.

So let's not forget the ultimate cost borne by the 86,000 Ottomans, 21,000 British, 10,000 French, 8,700 Australians, 2,700 New Zealanders and 1,350 Indians who lost their lives at Gallipoli. But let's also not forget the devastating effect that the campaign had on the families of those who never came home. While visiting Lone Pine, Australian writer Peter Fitzsimons stumbled across a gravestone that read: "DIED IN A FOREIGN FIELD. AND FOR WHAT?" Amid the saccharine commemorations of the Gallipoli centenary, this, above all, is what we must not forget - that is to say, lest we forget, in the words of Bean, "the utter hopeless wastefulness" of war.

* Dr Tristan Dunning is an honorary research fellow at the School of Historical and Philosophical Inquiry at the University of Queensland in Australia and publisher of Hamas, Jihad and Popular Legitimacy: Reinterpreting Resistance in Palestine​
Last Update: Apr 30, 2015 12:14 am
RELATED TOPICS