Maintaining the correlation between material progress and moral quality 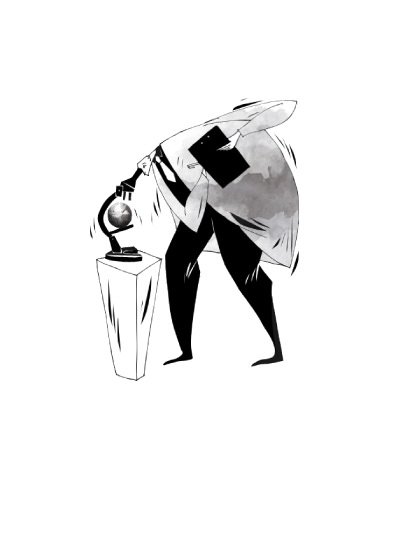 Despite all the progress in science, today the world is constantly finding itself in crises of morals and yearns for reformation of values. This fact, yet again attests how the moral qualities of populations have pursued a negative correlation with the progress of materialistic progress

Humans have never been more capable than the now, thanks to the advances made in science and technology. These materialistic advances have undoubtedly either directly brought about, or influenced major societal, political and global evolution. In his book, "Man, the Unknown," the late French surgeon and biologist, Alexis Carrell, draws attention to how this evolution raises questions about the regressing aspects of human life amid these advances. To him, "Man has gained the mastery of the material world before knowing himself." In a way, the advances made have further separated humankind from the notion of knowing itself, because these advances have furthered human arrogance, causing us to think that we have control over everything. This arrogance has led to a sense of overconfidence that defies any value that does not correlate with the findings of science. As a result, the values of a decade ago, let alone centuries, have diminished in their significance, as anything that is not initiated by humankind no longer carries any weight. Values that have been built up over centuries and handed down by our forebears are overshadowed by minds that believe science to be the all-knower. Here Carrell touches on a significant issue outlining what could be a controversial matter: "[M]odern society has been built at random, according to the chance of scientific discoveries and to the fancy of ideologies, without regard for the laws of our body and soul. We have been the victims of a disastrous illusion - the illusion of our ability to emancipate ourselves from natural laws. We have forgotten that nature never forgives."

The Spanish-American evolutionary biologist and philosopher Francisco J. Ayala makes statements in line with what Carrell emphasizes above. Ayala challenges the belief that valid knowledge can only come from science, but similarly, challenges the view that religion could explain natural processes. He admonishes scientists who hold the view that religious beliefs are the remains of pre-scientific explanations of the world and amount to nothing more than superstition. He explains how each is valid within their own realm because in his view, science has nothing decisive to say about values, whether economic, aesthetic or moral, and nothing to say about the meaning of life or its purpose. He further states that science neither has anything to say about religious beliefs, except when these beliefs transcend the proper scope of religion and make assertions about the natural world that contradict scientific knowledge. In parallel to what Ayala says, while highlighting the contributions that science has made to human life, Carrell emphasizes the fact that the moral qualities of populations have pursued a negative correlation with the progress of materialistic progress. In fact, he advises how this negative correlation has led humankind to manifest mental weakness, mental instability and a lack of moral sense.Is it not intriguing how humans could fully believe in science and lead the materialistic side of their life according to whatever science proposes with full devotion, while not allowing room for religion, which concerns the moral side of human life? Is this because we are now only worshipping science - indirectly ourselves - and thus, anything that is not produced by humankind has no value and meaning? But how is this progressing lack of morality indicated by Carrell and elaborated by Emeritus Professor Zygmunt Bauman in his article "The Absence of Society" addressed or challenged? Is it through the normalization of all human choices, or invitation of some generally-accepted values to govern societies? Is there not so much new terminology that will confirm the former? Has not there been an absolute variation in the meaning that man now attributes to terms such as "out of wedlock," "adultery," "moral," "immoral" and so on. In fact, some of these terms no longer have any resonance in societies, as with societal developments, new forms of living have come about and the values that were attributed to notions such as "marriage" are disappearing in many societies. The term "one-night stand," and its wide acceptance in many countries, outlines the extent of change and the weight that morality has in many countries.

The repercussions of this change and erosion of values that hold families and societies together has led to significant implications for societies in general, but most importantly for the bearer of future generations, our children. In this lack of moral atmosphere whereby all the ills of materialism prevail on children through greedy consumerism, the children of today are more vulnerable than ever. Especially taking into consideration the fact that there are a substantial number of children growing up with no paternal presence, the extent of the issue and the issues that may be affecting future generations becomes clearer. For instance, according to a report released by the conservative U.K.-based think tank "Centre for Social Justice" in 2013, there were one million children in the U.K. growing up without fathers present. According to the same report, the number of single parents is increasing by 20,000 a year and should reach two million this year. Research has shown that the absence of fathers is linked to higher rates of teenage crime, drug abuse, underage pregnancy and disadvantage. This issue is not only restricted to the U.K., but is prevalent in all modern societies, and the issues of the modern age are not restricted to these problems alone. There are a number of other issues such as mental health, alcohol and all sorts of crimes that are affecting societies that seem to be more advanced materially. Is this a natural progression and evolving, or is it because the damage that has been done to the laws governing our body and soul, as indicated by Carrell, has taken place to an extent that humankind is no longer able to tackle this progressive destruction of values that used to govern and control our body and soul?

The control and preservation that was enforced through social control and moral values is replaced in many countries by the over-legalized life of human affairs. Due to a decline in the moral quality of societies, what used to be considered a crime is no longer considered as such in most people's conscience, as the values that attributed the meanings of evil to these crimes are disappearing from societies. One could say that laws stem from religious and social values and are a reflection of what is tolerated and not tolerated in societies, which is all fine as far as it goes. However, when values that determine this tolerance disappear, laws will also lose their significance and become orders for which our conscience has no value, but only fear

In light of all these issues, where do we put the 2011 London riots with people ransacking, stealing, looting and posing serious risk to those on the streets who were not engaging in the same behavior? This was an example of how the fear of law became surmountable through the organization of violence. But in this advanced age of social media, how could further disorder be tackled when morality is losing meaning with every passing day?

Is humankind, which had a regard for a superior creator and therefore, had the belief that each action would have to be answered for, controllable through the laws of modern societies without the values and principles that used to guide individuals' actions in modern societies? All this debate leads us to the question of whether humankind has really become the master of the world, or has lost that characteristic through the arrogance gained through the advances made in scientific and technological discoveries. Which of course leads us to further questions such as: Is humankind at a loss more than ever? Are the new ideologies or perspectives that lack a value base strong enough to prevail in societies and take societies into the coming centuries? Are societies able to stop continuing to normalize new-age beliefs at the expense of future generations? Could humankind ever establish a positive correlation between materialistic progress and moral quality? Or will we be our own murderers? Because as Carrell says, nature never forgives.