A theoretical debate: Should Iran get the bomb? 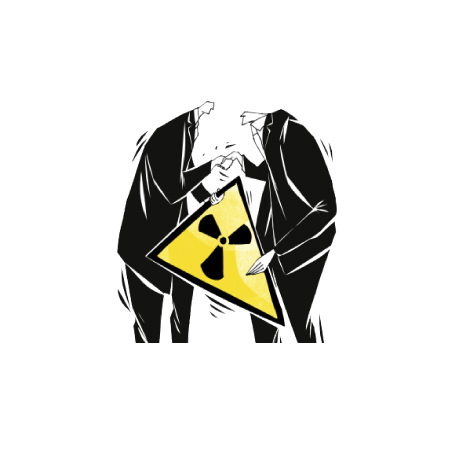 The nuclear talks between the Iranian regime and the P5+1 countries have broken many taboos. After this deal, Iran is expected to challenge Israel's nuclear hegemony but it is a matter of dispute whether this will create more tension in the Middle East

A nuclear deal with the Iranian regime has been one of the essential policy targets of the administration of U.S. President Barack Obama. Following marathon discussions, tactics, sanctions and negotiations, a framework agreement between the Iranian regime and the P5+1 countries (the U.S., U.K., France, Russia and China plus Germany) was reached on April 6, 2015. The recent agreement on Iran's nuclear program was not only a surprising deal, but it was also historical, as it has the potential for a new dimension within the 35-year non-relationship between Iran and the U.S. As Obama said in reference to the agreement: "I am convinced that if this framework leads to a final, comprehensive deal, it will make our country, our allies and our world safer." It might be too early to make concrete assertions, but such a crucial agreement between Iran and the U.S. highlights the historical significance both for the regional and global balance of power. By the way, Iranian President Hassan Rouhani said: "If there is no end to sanctions, there will not be an agreement," and continued: "The end of these negotiations and a signed deal must include a declaration of canceling the oppressive sanctions on the great nation of Iran."

Should Iran get the bomb? According to Kenneth N. Waltz, a founding figure in the branch of international relations theory called "neo-realism" or "structural realism," yes it should. In his essay published in Foreign Affairs in 2012, Waltz argues that "a nuclear-armed Iran would probably be the best possible result: the one most likely to restore stability to the Middle East." Waltz also argues that Iran can rarely be dissuaded from the pursuit of acquiring nuclear weapons through economic sanctions as the historical record indicates. North Korea is the best supportive example showing that if Tehran considers its security as highly dependent on possessing nuclear weapons, sanctions, as in the case of North Korea, which succeeded to get weapons regardless of sanctions and U.N. Security Council resolutions, will not work as intended. Security is the key concept in this argument, and Israel's regional nuclear monopoly is considered the main cause behind the instability in the Middle East.

However, is it all about the security concern, especially against Israel's nuclear capability, for the Iranian regime? I contend that the arguments on nuclear deterrence have some limitations in understanding the dynamics of the relationship between the Obama administration and the Iranian regime, and their priorities as well. Iran, with its historical Persian identity from the Achaemenids to Sasanians and onward, is neither North Korea nor some other actor in international politics. No one can deny that it is the Middle East and a completely different case. When it comes to Iran and the Middle East, there arises some other crucial factors that design the method of politics such as Persian nationalism and a historical sense of regional leadership with the sectarian identity and hegemonic challenges of the Iranian regime, present since the Iranian Revolution in 1979. At this point, a constructivist model can offer an additional comprehensive view of states and their preferences, interests and priorities through their identical codes. As Alexander Wendt argued: "[I]f the United States and the Soviet Union decide they are no longer enemies, the Cold War is over." Such a constructivist model with its basic assumptions on the role of identity, values and ideas of states can be applied in order to understand the issue of nuclear agreement between the Obama administration and the Iranian regime.

A pure realist actor and a constructed identityAs Waltz argued: "International politics is the realm of power, of struggle and of accommodation. The international realm is variously described as being anarchic, horizontal, decentralized, homogeneous, undirected and mutually adaptive." While (neo) realism highly focuses on understanding the running of the international system at the structural level, it might ignore the central determinant components such as the role of ideology, norms, values and ideas. From the standpoint of constructivism, perceptions and ideas are the fundamental forces that shape the logic of international politics. The values or perceptions of states and their citizens come into being by societal interaction. Thus, the conflict or cooperation between states largely depends on bilateral perceptions. As Wendt, a prominent figure in constructivism, asserted that anarchy is what states make of it, it is also possible to rebuild the argument by contextualizing that cooperation, enemies or alliances are what states make of it. In this sense, two states can start to negotiate and rebuild their understanding and bilateral relations as the identities and interests behind the states never remain static and unchanged, but are always in a constructive process through mutual discourses.

Realist arguments for the Iranian nuclear program are based on the assumption that Iran, as a rational actor in the region, would seek the pursuit of nuclear arms as a means of deterrence against Israel. Touching on the significance of security concerns, a realist approach can help us to understand how the state of Iran behaves under certain conditions, despite its lack in the role of ideas and norms behind state attitudes and approach to foreign policy. In addition to the basic assumptions of realism that states are motivated through concerns such as power-seeking and security issues, constructivist models include the ideas, values and identities of the actors developing their discourses and attitudes with the others into the scope. Utilizing both constructivist and realist thought, Iran's nuclear pursuit can be regarded as the outcome of both security concerns and ideological and identical considerations.

Rather than a realist perspective focusing on security concerns, Stephen Walt and John Mearsheimer, in their book, "The Israel Lobby and U.S. Foreign Policy," highlighted the background of challenges, policies and attitudes toward Iran, arguing that Iran is widely portrayed as Israel's most dangerous enemy and an existential threat, since it is the state most likely to acquire nuclear weapons. Then Israeli Prime Minister Ariel Sharon began publicly pushing the U.S. so that the administration of President George W. Bush would strong-arm Iran "the day after" it conquered Iraq. It was a call, which began in April 2003, for regime change in Iran since Iraq was "not enough." The authors came to the conclusion that Iran's nuclear ambitions had never become a direct or existential threat to the U.S. It is the same U.S. that could live with a nuclear Soviet Union, a nuclear China or even North Korea, so it could also live with a nuclear Iran. "Iran and the United States would hardly be allies," they said, "if the lobby did not exist."

It might provide a number of advantages to pursue a nuclear program, but Iranians are all aware of the fact that being a nuclear power in the region would ultimately bring some disadvantages to the regime. If Iran becomes a nuclear power, it is most likely that Turkey, Saudi Arabia and even Egypt as other states in the region would try to build nuclear programs in order to balance Iran. In addition to the regional aspect, the international community, with its main body - the U.N. - will continue to press through several sanctions in order to abandon the nuclear program. It is easy to see that these sanctions have been and continue to contribute to economic outcomes that are highly damaging to the socio-economic situation in Iran and are undermining the survival of the regime.

New discourses and new attitudesIt is worth noting that Iran's nuclear program was launched in the 1950s by the U.S. at Tehran University as part of the "Atoms for Peace" program announced by U.S. President Dwight D. Eisenhower's administration in December 1953. However, since the Iranian Revolution in 1979, the positive Western attitude toward Iran was reversed and Iran was marginalized. As the-then Iranian President Mahmoud Ahmadinejad also told Der Spiegel in 2006: "It's interesting to note that European nations wanted to allow the shah's dictatorship the use of nuclear technology. That was a dangerous regime. Yet those nations were willing to supply it with nuclear technology. Ever since the Islamic Republic has existed, however, these powers have been opposed to it. I stress once again, we don't need any nuclear weapons." All the discourses accompanied with the strategy of "dual track" as a foreign policy approach toward the Iranian regime began with the administration of U.S. President Jimmy Carter and continued with Presidents Ronald Reagan, George H.W. Bush, Bill Clinton and George W. Bush.

The Western perspective on Iran lacks insight into the Iranian internal political structure. Western discourse is mostly directed by an analysis that only justifies their approach, in which the Iranian supreme leader has the full authority on nuclear issues. Reality appears very different, as the negotiations indicate that Rouhani, along with his minister of foreign affairs, might be influential and have a great role to play. "Dialogue among civilizations" developed as a discourse by the former Iranian President Mohammad Khatami on the one side, and the discourse of the "axis of evil," used by the second Bush administration on the other, are completely different and conflicting discourses indicating how the actors redefine and reconstruct both themselves and the Other.

Rouhani said that world powers must "seize the opportunity" of a nuclear deal, insisting that Tehran had taken the "necessary steps" for an accord. He also added: "We believe there is a third option. We can cooperate with the world." Regarding the Iranian regime, Obama's view that the election of Rouhani indicates that there was an appetite among the Iranian people for a rejoining with the international community, an emphasis on economics and a desire to link up with a global economy. Looking at the new discourses from both sides, it seems that a deal is possible and is the single policy choice for both sides, as an ultimate legacy for the Obama administration, and the opportunity to become a global actor without sanctions for the Iranian regime.
Last Update: May 12, 2015 10:03 pm
RELATED TOPICS