From Shiite crescent to full moon? 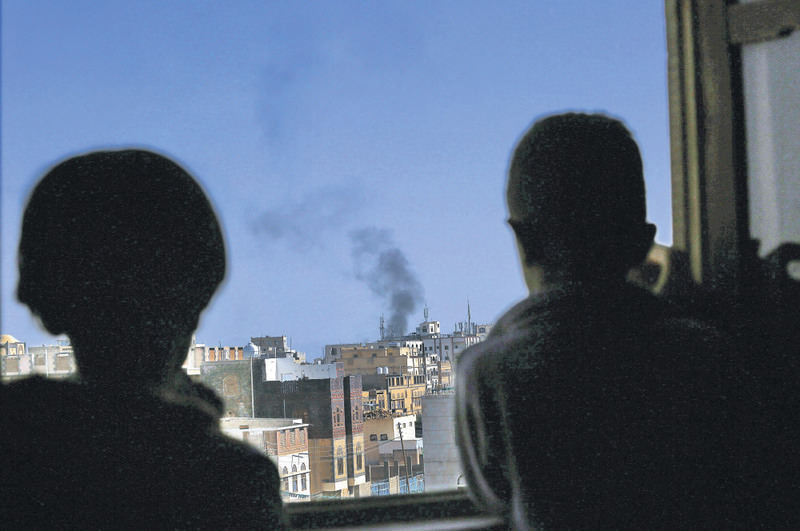 Yemeni boys watch black smoke rising above a neighborhood following airstrikes carried out by the Saudi-led alliance targeting a Houthi-controlled military base in Sana'a.
by Necmettin Özdin May 25, 2015 12:00 am

After the U.S. invasion of Iraq, Iran has become the most powerful stakeholder in Iraq, expanding its influence across the Middle East. Now with the Shiite Crescent gradually evolving into a full moon, the region's security more fragile than ever

Recent developments beginning with the Arab Spring and continuing with the sectarian clashes from Syria to Yemen in the Middle East have raised many questions. One of these crucial questions is how such important developments, events and issues in the domestic, regional and international environment have affected and will continue to shape the region's political structure? The U.S. invasion of Iraq in 2003 paved the way for a process of Shiite expansionism from Lebanon to the Persian Gulf, not only through the elections as in Iraq, but also through bloody conflicts in Syria and Yemen. It was a call by King Abdullah of Jordon for the dangers of the "Shiite crescent" in December 2004 - the one stretching from Damascus to Tehran over Baghdad. A regime change to democracy was the primary goal behind the fall of the Saddam Hussein regime; however the Bush administration found itself in a position that helps a broad Shiite revival through empowering Iraq's Shiite majority. There is no doubt Iran has become the only regional winner from the "war on terrorism" in Iraq and Afghanistan. With the removal of the Taliban regime in Afghanistan and Saddam Hussein in Iraq, there are no regional threats left for Tehran.After pointing out that Iran's nuclear deal could alter the balance of power in the Middle East, and inflame Sunni-Shiite tensions, The Economist discussed the Iranian-backed armed allies from Syria to Yemen by quoting Hassan Hassan, an Abu Dhabi-based analyst, who argues that "The idea of a Shiite crescent in the region has become obsolete. Today, it's a full moon and the Gulf is surrounded." As Zalmay Khalilzad, the U.S. Ambassador to the U.N. under President Bush, said "Iran is stronger today because of the U.S.-led invasions of Afghanistan and Iraq." The invasion of Iraq in 2003 helped Iran's relative position in the region to increase and to become the winner, because Iraq has been a rival to Iran. The invasion of Iraq has profoundly changed all aspects of the Middle East, just not in the way it was anticipated.

Iran in its modern history has never been as influential in the region as it is now. For Ibrahim Nawar, chairman of the Arab Organization for Freedom of the Press, since the fall of the Saddam regime, new political realities have emerged in the Middle East with Iran becoming the most powerful stakeholder in Iraq. The removal of the Saddam regime led to Iran spreading its periphery across the Gulf and Arab-dominated Middle East. Tehran pursued the building and developing of close relationships with other key actors in the region - especially in Syria, Lebanon (Hezbollah) and Palestine (Islamic Jihad and Hamas), and with the political groups in the Gulf, Yemen, Sudan, North Africa and even in Egypt and Saudi Arabia.

Iran has been involved in the developments in Syria for the past four years. As an Iranian military source told Al-Monitor, "Hezbollah's role in Syria was part of its resistance role on the borders with Palestine, yet this is going to change. The resistance bloc as a whole is going to assume responsibility wherever there's a need for help across Syria - it doesn't matter if it's Raqqa, Deir ez-Zor, Aleppo, Idlib - even the number of fighters on the ground will witness a surge. There are thousands of volunteers waiting to join this holy war." The Iranian military source said, "This is one of the biggest battles in the history of the Middle East. Thousands of people are giving their lives to defend what they believe in. This is happening on both sides... In the end there will be a victorious side and we hope it's us... In Syria we are fighting for Islam, for the region, and we believe this as we believed in the 1979 [Iranian] Revolution." Hezbollah Secretary-General Hassan Nasrallah also said that "We were where we needed to be, and we will be where we must be; we believe that this is not [just] the battle of the Syrian people, it is defending ourselves: Syria, Lebanon and the entire region."

Both the collapse of the Saddam regime and the Iraqi army led Shiite militias to emerge as the strongest military power within the country. As noted by The Economist, on March 25, the most visible signs of emerging Shiite influence in the Arab world are in Iraq, where the Shiite militias are leading the battle against the Islamic State of Iraq and al-Sham (ISIS). The main fighting is now occurring in the Sunni heartland in Tikrit, the tribal center of Saddam Hussein. Hezbollah is the strong militia in Lebanon, but it has moved large numbers of men into neighboring Syria to push back Sunnis seeking to defeat the Assad regime. In Iraq the fighting is mostly under control and coordinated by Iran and Qassem Suleimani, the chief of Iran's elite al-Quds branch of the Revolutionary Guard.

The land in the Shiite crescent is not only directed by the Shiite sectarian common ground; it is the common enemy perception that brings together both Syria and Iran in line with the same target. During the Iran-Iraq war from 1980 to 1988, Iran was backed by Syria, the only one acting this way, unlike the other regional actors. In this context, no ideological factor lies as an obstacle to the Shiite crescent expanding toward a full moon. With the removal of the Saddam regime, an alliance between both states took place following the Shiite electoral victory in Iraq through al-Maliki's government. This has been ultimately expanding from the Shiite crescent linking Beirut, Damascus, Baghdad and Tehran to a Shiite full moon over Yemen with Iranian-backed Houthi rebels. On the other hand, Iran-Hezbollah relations differ from the one with Syria due to its strategically proxy-oriented feature for dealing with the same threats and balancing their regional rivals.

Iranian foreign policy's perspective toward the regional issues has been mostly shaped by the two crucial factors: geo-political realities of the region and its (sectarian) ideology. Iran has land borders with seven states: Iraq, Turkey, Armenia, Azerbaijan, Turkmenistan, Afghanistan and Pakistan; and also has maritime borders with six Persian Gulf states: Kuwait, Saudi Arabia, Bahrain, Qatar, the UAE and Oman. In the northwest is Turkey, a country that is historically was a regional rival during the period of the Ottomans and Safavids; in the west is Iraq and in the south is Saudi Arabia. In addition to this circle, it is also worth noting that Iran has no membership within any regional political and security organizations, thus positions itself as a key actor in the Levant through proxies. A set of the crucial factors from the geography as a destiny for Iranians to historic experiences will continue to shape Iranian foreign policy in the coming days.Consequently, the nuclear talks between Iran and the U.S. - as the first item of the international political agenda nowadays - have also caused Iranian expansion to grow gradually. Considering Iran has systematically supported proxies from Hezbollah to the Assad regime to the Houtis in Yemen and Shiite militias since the revolution in 1979, Iran's pursuit of a nuclear program is not the greatest threat for the regional balance of power; more importantly it is the secondary one comparing to Iran's active, aggressive and long-term strategy of being the hegemonic power in the region.
RELATED TOPICS