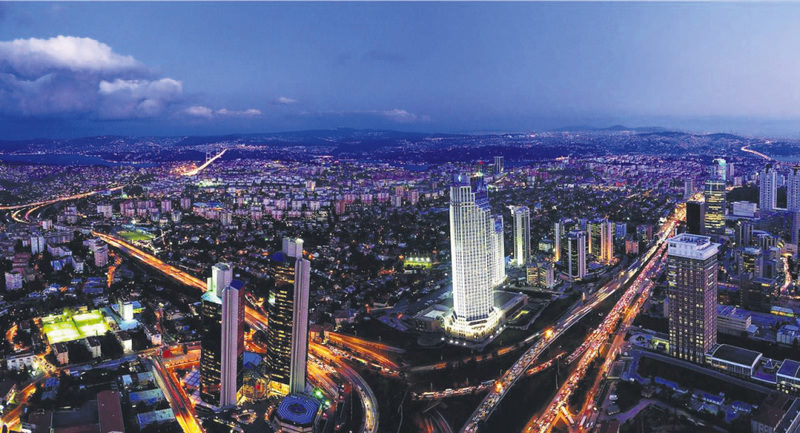 In 1947 Joseph Schumpeter drew attention to the destructive as well as transformative effects of megaprojects, calling them "creative destructions." Thus, while mega projects attempt to rapidly and radically change the environment, it is not just the funders or the politicians that have a stake in this transformation, but also civil society. However, recently in Turkey, the projects that are being developed for the "common good" are being affected by ideological polarization. The third bridge, the third airport and the Kanal Istanbul projects, known as the "Three Mega Projects," were heavily discussed in the public sphere throughout 2014 due to their potential to affect Istanbul's social, economic and natural configuration. Although the discussions have dwindled, the ideological positions of the sides remain the same. The Turkish Foundation for Combating Soil Erosion (TEMA) raised objections to the projects on the basis that the city's natural landscape should remain intact, while the Forestry and Water Affairs Ministry pushed back saying the investments were made on a legal basis. The ministry claimed that the report by TEMA, far from scientific concerns, had a simple political agenda. The main criticism was that the TEMA report had evaluated all three projects as one, not discussing each separately.

The total rejection of all projects by the TEMA report was criticized by politicians and academics alike. Environmentalist organizations' negative reactions to the projects reflected a political stance against the Justice and Development Party (AK Party). They treated the projects as political investments made by the party rather than projects that belonged to the city and were being carried out for the use of its residents. This kind of treatment was adopted by various segments of society ranging from political parties to media and nongovernmental organizations. Tracing ideological attitudes of the political parties to the mega projects via Kanal Istanbul, we see that while the AK Party, as the owner of the project, uses phrases such as "an alternative Bosporus" and "no turning back, construction is in progress," the Republican People's Party (CHP) says: "Turkey needs intellectual people, not mad men." The Nationalist Movement Party (MHP) claimed "services that would have provided more good to the people should have been carried out" while Peace and Democracy Party (BDP) called it "an unrealizable project, the Social Democratic Populist Party (SHP) claimed that "the ambitious project [Çılgın Proje] was ours." The Great Union Party (BBP) announced: "We shall confront the ambitious project with our feasible/realizable project" and the Greens and the Left Future Party (YSGP) called them "unnecessary projects made on the basis of personal interests." The same type of polarization was observed in environmentalist organizations and the media's discourse as shown below.

The apparent reason as to why environmentalism in Turkey has not been able to substantially influence either politics or public opinion despite growing numbers of environmentalist organizations and general awareness is the political language of their discourse. Environmentalist movements, due to their nature, cannot expect to remain outside of the political sphere. Still, surrendering to use the low language of common political discourse renders their power in a way to prevent certain actions ineffective. The debates on the three mega projects could be roughly split into two main sides; those who claim the ruling party's irresponsibility harms nature and those who argue environmentalist organizations are lying. Transport, Maritime and Communication Minister Lütfi Elvan's tense response to the criticism in the first few months of 2015, concerning the land on which the third airport was being built, serves as a manifestation of the nature of these debates. Elvan said environmental concerns were taken into consideration, and at least 10 times more than the amount of trees that had been cut were to be replanted. He said he found it difficult to understand why objections were still being raised in the light of these facts. He continued: "I wonder if these people do not love this country."

Discourse around environmentalist sensitivities is heavily based on ethics and therefore constitutes one of the most challenging issues for any ruling party. In Turkey, the language used by environmentalist seems to be related to the political tendencies of its sociological realities. It may be that one of the reasons behind the similarities between the above mentioned tendencies in political party discourses and environmentalist organizations is precisely this. The makeup of the membership of environmentalist organizations in Turkey is mostly well-educated, young, upper-middle class and leftist. Environmentalists in Turkey oppose liberal policies just as their counterparts in other countries do. Environmentalist organizations' anti-system stance, which finds a basis in the aforementioned sociological structure of these organizations, have in recent years also included AK Party opposition into their discourse and the Gezi Park protests emerged out of this motivation. Due to its liberal and conservative policies the AK Party is subjected to a double opposition by environmentalist movements. However, this opposition often moves away from the realm of reality into a realm of discourse. Last June, there was an interesting protest in Kuzguncuk, one of Istanbul's greenest districts. Inhabitants who feared that some trees were being cut down in Kuzguncuk's green spaces, made calls on social media and dozens gathered instantly in the green spaces to protest. It was later revealed that the municipality was only pruning the trees. Still, municipality workers were disrupted. Environmentalist sensitivities of the more recent years surfaced even in the level of individuals through their leftists or Turkish-type statist reactions.Although environmentalist organizations are divided in terms of their ideological and non-ideological positions, the main characteristics of environmentalism in Turkey are still statist or leftist. It is worth noting that one of the environmentalist movements that operates with a fight logic visited Çanakkale in order to protest construction of a gold mine in Bergama, and yet another group went to Ankara to visit Mustafa Kemal Atatürk's tomb to complain to him about the state council decision. It is interesting that Hayrettin Karaca, the founder of TEMA, also known as "grandpa" sees land sales to foreigners as the first step on the way to be colonized. Another dimension of this discussion is that land sales to foreigners are not only for tourist purposes but also for large-scale industrial trust companies in the food sector. Turkey's environmentalist opposition adopts such an ideologically heavy language that it often tramples its main agenda. The reason sparking the Gezi incidents was introduced to the public as the cutting down of trees in Gezi Park. In the first three days, the protest gained wide support from different segments of society, but when the slogan that called for the government's resignation started dominating the previous environmentalist concerns, societal support was quickly withdrawn. If we are to follow up on environmentalist institutions' ideological positions by looking at their discourse on Kanal Istanbul, we can see that they run parallel to the political party discourses mentioned above.

Greenpeace has said: "'The project will cause environmental disaster," the Office of Environmental Engineers (ÇMO) said: "The project is a massive threat for northern forests," TEMA said: "The ecosystem will be damaged," the Çekül Foundation said: "The right to life is being taken away not only from humans, but also from trees and animals," World Protect the Nature Foundation said: "We must either forget about the canal or Istanbul," TMMOB ÇMO said: "It will cause a severe problem of urbanization," ÇMO said: "It will disrupt Istanbul's ecosystem" and the Middle East Strategic Research Center (ORSAM) said: "The rising strategic and economic importance of the Bosporus will be accompanied by the rise in the risk of accidents." Another interesting point is that the ideological division found in the national press is non-existent in the international arena. A brief look at Turkish newspapers shows that while Yeni Şafak wrote: "The canal will make more income than the Suez Canal," Hürriyet daily wrote: "Kanal Istanbul will be the end of Istanbul" and Radikal daily wrote: "A mad and terrible project" while Akit daily wrote: "Turkey will boom with the Kanal Istanbul project." The international press, on the other hand, has in general expressed highly positive expectations from the project. The Wall Street Journal wrote: "Turkey Plans Own Panama Canal," the BBC announced it as "The rebirth of Istanbul's Bosporus," Le Monde wrote, "Canal Istanbul: Project of a Century for Turkey," Der Western wrote "Kanal Istanbul to relieve Bosporus," Liberation wrote: "Istanbul's historical canal" and The Guardian said: "Istanbul's new Bosporus canal 'to surpass Suez or Panama.' "