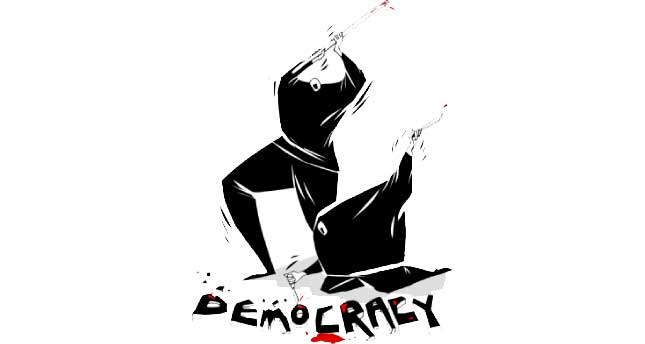 The West has a growing sympathy toward the HDP as the party has been advertised as a rainbow movement and savior of Turkish democracy. But, the people in Turkey know what the HDP really is deep down and what kinds of forces control the party

It was just like a shark attack in the sea with lots of blood all over. The landlady of the flat on Yeni Cengizler Street of Diyarbakır, where four youths - Yasin Börü, 16, Hasan Gökgöz, 26, Yusuf Er, 18, and Hüseyin Dakak, 19 - took shelter on Oct. 7, 2014 at 6:40 pm described their brutal killing with these words. Those who are not convinced may find more details about these murders in the bill of indictment. "The perpetrators attacked the slain and the injured youths first on the street and then began to chase them as they ran away. Upon identifying the building they entered, the perpetrators checked the flats one by one. One of them descended from an upper story to a lower one with a strip of cloth around his body and shot at the victims. Upon opening the door to the attackers, the group entered the flat and stabbed, kicked and beat the wounded. Then they threw three of them from the third floor and dragged one of them out of the flat and went on attacking the victims, who were in the throes of death, with kicks, stones, sticks and knives. The assault was carried out with a sadistic thought and in an inhuman way, suggesting the perpetrators rejoiced in the pain suffered by the slain and the injured."

The killing of four Kurdish youths in Diyarbakır by militias from the Patriotic Revolutionary Youth Movement (YDG-H), the armed urban wing of the outlawed PKK, stemmed from claims by the PKK's media outlets that the Islamist Kurdish movement, Hizbollah, which the victims sympathized with, had supported the Islamic State of Iraq and al-Sham (ISIS). They were not the only victims. During the violence of Oct. 6-8, 2014, 69-year-old Ahmet Albay was killed in front of his house in Adana for having a long beard, 55-year-old Mahmud Enes was killed while walking on the street with his wife who wore a headscarf and two Syrian Arab refugees who had come to Mardin to work were dragged from a car and killed for having beards and allegedly being pro-ISIS. Having begun with attacks by PKK militias out on a hunt for pro-ISIS people, nearly 50 people - most of them in clashes between PKK and Hizbollah - were killed. Since the PKK claimed that the Justice and Development Party (AK Party) was also pro-ISIS, AK Party-controlled municipality buildings, museums and libraries were set on fire and shops of pro-AK Party tradesmen were looted. What made Kurdish youths take to the streets in the Kobani protests and launch a manhunt for pro-ISIS people was an urgent call by Peoples' Democratic Party (HDP) Co-Chair Selahattin Demirtaş on the night of Oct. 6. His announcement said: "We call on all Kurdish people to take to the streets and take action. From now on everywhere is Kobani."

The number of Kurdish civilians killed between Oct. 6 and Oct. 8 in events started by those who were out on a hunt for alleged pro-ISIS people following that call was greater than the number of Kurdish civilians killed while fighting real ISIS militants in Kobani. It was not the first incident involving Demirtaş, whose elder brother, former co-president of the pro-Kurdish Democratic Society Party (DTP) - a predecessor of the HDP - is currently a member of the PKK and is in northern Iraq's Qandil Mountains where the PKK leadership is based. It was Demirtaş again as co-chair of the Peace and Democracy Party (BDP) at the time who conducted public relations of an armed civil uprising launched by the PKK in 2011-2012 to create liberated zones. According to figures from the International Crisis Group (ICG), a total of 1,300 PKK militants and soldiers lost their lives for the sake of the "PKK's phantasm" for which Demirtaş conducted public relations by issuing misleading statements like: "A 400-kilometer zone lying between Çukurca and Şemdinli is under the PKK's control." With the PKK, essentially a rural guerilla organization, taking the conflict to cities, four girls who were headed to a wedding in Siirt were killed as they were mistaken for police officers. In Batman, three prominent figures, including human rights activist lawyers, were killed by a PKK-planted landmine. PKK militants preparing to bomb a military vehicle killed three old farmers in İzmir who accidentally saw them and in Bingöl, a woman who went out shopping for an upcoming feast threw herself onto a PKK suicide bomber to protect her children and died with one of her children. But you would be mistaken if you think after recalling all these incidents that similar cases are listed in an article published in Foreign Policy and titled "The Turkish Opposition's Secret Weapon." The author of the article, a former AK Party deputy who served as political adviser to an opposition candidate during the last local elections, has probably not spent the last three years in Turkey.

That the article mentions attacks on HDP election offices, however, suggests the author has been in Turkey recently. Then the fact that he does not make mention of two members of the Free Cause Party (Hüda-Par) who were killed just a week ago by HDP supporters in Şırnak, cannot be explained by forgetfulness. Again, it is difficult to believe the claim about Demirtaş in an article published in Der Spiegel magazine with the title "The Man Who Could Save Turkish Democracy." Of course, the armed PKK commanders in the Qandil Mountains, who even said which party the HDP should form a coalition with in various interviews in recent weeks, may order him to save Turkish democracy. Western media describes the HDP as a rainbow movement, comprising environmentalists, homosexuals and women. In this case, some truths should be kept in order not to wake them from their dream: Figen Yüksekdağ is the former leader of an old-fashioned socialist party that defended dictatorship of the proletariat, HDP candidate for İzmir Ertuğrul Kürkçü was a member of a militant group in the 1970s that kidnapped and killed Israeli Consul General Ephraim Elrom in Istanbul along with three British technicians, HDP candidate for Istanbul Levent Tüzel is the leader of a party that follows the line of Enver Hoxha and believes in Stalin's virtues and the HDP's Alevi candidates for İzmir and Istanbul joined pro-Bashar Assad rallies. In Egypt, we witnessed an example in which the army saved democracy according to the West. So it comes as no surprise that the West expects the same from an armed organization in Turkey.
Last Update: Jun 06, 2015 1:26 pm
RELATED TOPICS