Neither victory nor defeat 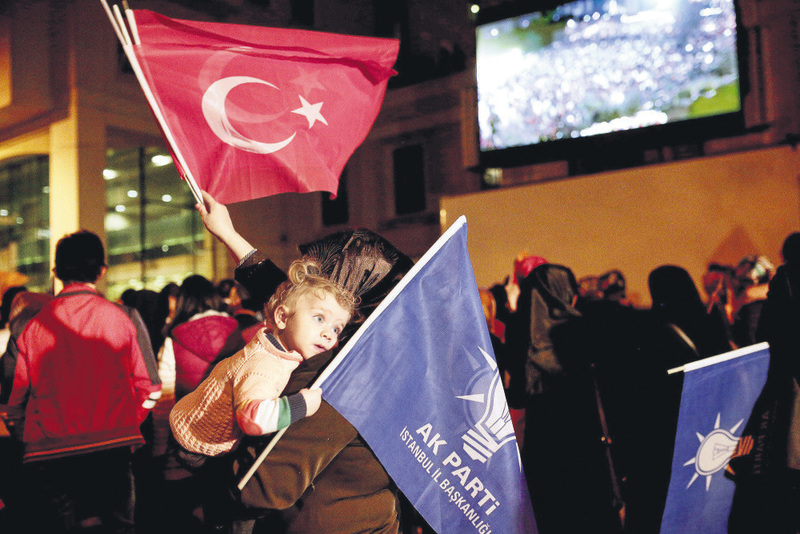 AK Party supporters wave party and Turkish flags at the party's headquarters in Istanbul on June 7.
by Farhan Mujahid Chak Jun 11, 2015 12:00 am

Even though the elections results signify no clear victory for the AK Party, they present an opportunity for the party to clean the house and regain its reform-centric nature. If the AK Party manages to accomplish these, it can secure an even bigger margin of victory in another election

The eagerly awaited parliamentary elections have given a humbling, though not devastating, result to the Justice and Development Party (AK Party). With nearly 41 percent of the vote, the AK Party will still have approximately 258 seats, short though, of the benchmark 276 required to form a single-party majority government. This then signifies a momentous transformation in Turkish politics from the preceding decade, which alters, though does not end, the AK Party's rule over the vibrant and illustrious country. In other words, this election may not be considered a decisive victory. Nevertheless, it is still foolhardy to consider it a loss. Actually, this election result should, without question, be seen as an opportunity for the AK Party to correct itself and secure an even bigger margin of victory in another election that seems certain to be around the corner. It is neither triumph nor defeat, and the fight is not over until the final round. Here, the AK Party would do well to accurately assess this situation and regain the confidence of the voters by winning their hearts and minds. In essence, it needs to come out strong against corruption, make very public purges of any pockets of malfeasance and send a clear message that the voice of the people has been heard. To do so would imply readying for a change in course, addressing major causes of concern among the electorate, mandating a discourse of inclusion and sending a powerful message for transparency.

Contrary to popular perceptions, this is certainly not a vote against the AK Party or President Recep Tayyip Erdoğan. After all, with the massive demonization and Islamophobic campaign that targeted Turkey, its president and the AK Party from The Guardian, the New York Times and a host of local and international journals, magazines and papers, this election result is a powerful indicator of the deep support that New Turkey has. However, that being said, it is a reality check or, better said, a yellow card for those in power. If the people are not ready, than leadership adjusts, and for the moment, Turkey is not ready for a presidential system even though it would really do wonders for it. Nonetheless, before that even becomes a reality, more needs to be done to include those outside the AK Party's political, cultural and economic reach. In that sense, more solid steps need to be taken to lessen the polarization of Turkish society. That implies using a tone of conciliation, humility and consultation for domestic consumption and maintaining an oratory of fearlessness, resolve and determination for an international market. At this junction, the AK Party should openly declare its willingness to work with anyone interested in the well-being of Turkey, and that they will not close the door on anyone. This will solidify its consultative and compromising image while at the same time put other parties, which are much more polarizing and divisive than the AK Party though never described as such, on the defensive. It is crucial to take this step while reiterating that no compromises to its core values will be entertained.

Early indications are quite promising that the AK Party leadership has understood the enormous challenges confronting them. After all, Turkey is bigger than just being Turkish. It is, evidently, more than just a nation-state - it is hope. Rather, it is a hope for its heterogeneous population and for hundreds of millions of people in the Muslim world, from Morocco to Malaysia, from the shores of Africa to the mountaintops of Kashmir and particularly for minority communities scattered throughout the Caucasus and Balkans, who place enormous expectations on it. For that reason, the leadership of this ever-so important political entity must not simply be acceptable, or even good. Truly, it needs to be exemplary. And this exemplary leadership is such that it negates the divisive forces that are tearing the Middle East apart and offers a third way. This is the great expectation from Turkey, that it is a balance of Islam, democracy and pluralism proposing a path away from both Sunni and Shiite extremists who plague the region. Even more so, it is an alluring symbol of what the future of Muslim polities could be, in which modernity, faith and knowledge come together beautifully with progress under the rule of law, fairness and minority rights. Nowhere is Turkey's pivotal and far-reaching global responsibility more visible than when one visits the numerous Ottoman mosques in Istanbul only to witness them constantly crowded with foreign, non-Muslim visitors in obvious awe of the spiritual and architectural magnificence before them. It is not without reason that the Prophet Muhammad said that he who conquers Constantinople could enter paradise by any gate that he wishes. Such is the importance of that city, and such is the importance of the caretakers of that legacy.

With that, Turkey does not have a choice but to live up to these great expectations. Of course these are monumental challenges and following the mean will involve enemies from all sides, extremists, religious or secular, domestic and foreign, all those who simply do not want a precedent of a vibrant, democratic Islamic polity to take shape, not to mention internal naysayers that prevent solidification and camaraderie in the ranks. Essentially this is the fight, but taking a phrase from Prime Minister Ahmet Davutoğlu's balcony speech - game on! Here it is important to recall that perceptions of corruption, even if unfounded, are as deadly as their reality. It would be prudent to recall the esteemed example of Caliph Umar, when approached by a recalcitrant Bedouin soldier rudely questioning him on his seemingly greater share in the spoils of war. Instead of punishing or abusing this unruly and disrespectful soldier, Caliph Umar reasoned with him and brought his son for proof against accusations. Such was the magnanimous character of Caliph Umar, and this example is all political players should consider well today.

At this juncture, anyone's guess may be as good as mine. It will be hard to make solid predictions on the coming political fortunes. However, according to Turkish law, President Erdoğan has to invite the AK Party chairman and prime minister, Davutoglu, to the Presidential Palace and give him the mandate to form the government. That formation needs to take place within 45 days, or the Supreme Election Board (YSK) will announce early elections in approximately two months time. Consequently, the coming 45 days are tense and the AK Party has to indulge in tough negotiations with other political players. That includes the Nationalist Movement Party (MHP), the Republican People's Party (CHP) or the pro-Kurdish Peoples' Democratic Party (HDP). Interestingly enough, the latter two, perhaps foolishly, have already declared that they will not enter any partnership with the AK Party. This will work against them come election time as people tend to shun those who are deemed overly aggressive and uncompromising. It is unsurprising from the CHP, but coming from the HDP, it is poorly thought-out. This could be a welcome opportunity for both to bury the hatchet and finally resolve the Turkish-Kurdish quagmire in honor, respect and peace.

As the AK Party is still in the driver's seat, Davutoğlu could initiate negotiations with MHP Chairman Devlet Bahçeli, but a coalition will not be easy given the latter's robust disapproval of Erdoğan. Even so, this could be a unique opportunity for the MHP, which can smell the corridors of power, after a long time. Alternatively, the MHP could also support an AK Party minority government on certain strict conditions. All this remains to be seen.

In conclusion, there is a well-known and authentic saying from the Prophet Muhammad: "The leader of a people is their servant." Now it is time for the AK Party to recognize where they went wrong, where to improve and not to confuse the absence of victory for failure. Equally as important is what needs to be re-evaluated and what needs to stay the same. This is an important question that I am sure they will seek to decipher. This actually is a wonderful opportunity for the AK Party to clean house and show commitment to their values of transparency and fairness, and continue their election campaign on the issues of stability, compromise and marching toward a New Turkey. The falling Turkish lira and political upheaval will have many people second-guessing their choices. Arguably, the AK Party could use this opportunity to ride a future people's wave of discontent and fear of instability if they make the proper public and visible changes.