An open letter to the Editors of The New York Times 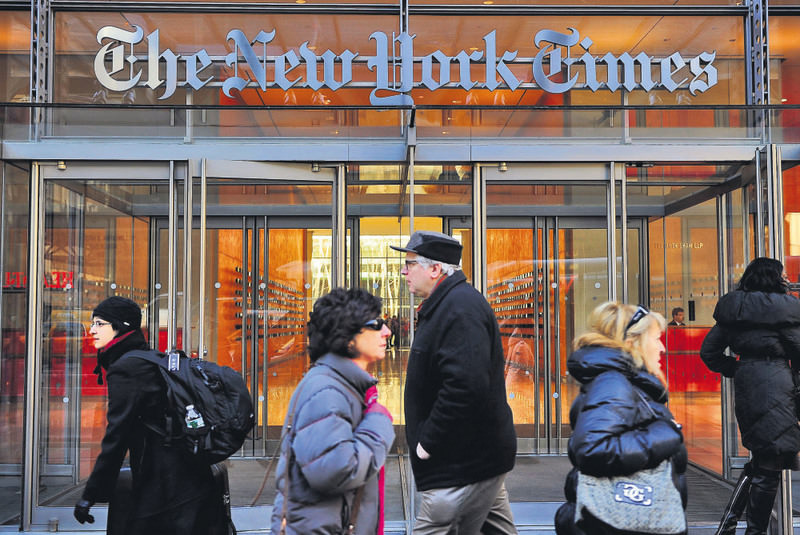 Over the last couple years, several well-known Western media outlets including The New York Times have become extremely alarmed regarding Turkey's future mostly because their bias against the ruling AK Party and President Erdoğan

Dear Sirs and Madams, because you are far away and may have never set foot in Turkey, I want to explain the importance of what I witnessed last Sunday evening. While walking home from watching Turkey's election results, and on one of Istanbul's most prestigious streets, a car went by honking its horn with people waving the yellow, red and green Kurdish flag out its windows. I relished the sight, smiled and messaged several acquaintances about what I had seen. You see, such a sight was unimaginable 10 years ago. The Justice and Development Party (AK Party) government is what made such a sight possible. As I hope you have realized after examining the election results, Turkey's democracy is alive, well, vibrant and energetic. As in previous elections, voting was carried out with few problems and with few irregularities. The results are real and accurate just as in previous elections. Turkey proudly displayed its free, open, transparent and just election system yet again. The AK Party received more than 15 percent more votes, nearly 19 million votes in a country of 80 million, than any other party, and an openly Kurdish party for the first time will take seats in Parliament with that identity and not as independent candidates.

For the past year you have carried out a campaign of editorial comments aimed at casting doubt over Turkey's democratic system and at affecting international opinion concerning the Turkish government. You should by now realize that your understanding of Turkish politics and of the Turkish political system is gravely flawed. The rumors that the AK Party engaged in vote manipulation are spread by their political enemies and you are being manipulated along with the other international publications that participated in repeating such slander. And those who are telling you such rumors do not have democratic intentions in doing so. This was exposed when the rumors about vote manipulation suddenly disappeared once the election results became clear. On social media during last Sunday's voting, an intense campaign was carried out by various opposition sectors to convince their followers that vote manipulation was underway and that "cars with no plates" were ready at various Istanbul voting sites in order to spirit away evidence of ballot fraud. Those allegations were ludicrous in the extreme, but more importantly, when it became clear that the Peoples' Democratic Party (HDP) had gained sufficient votes to enter Parliament and that the AK Party would not have sufficient deputies to form a government, the "cars with no plates" rumor swiftly disappeared from social media. I imagine that no one informed you about that phenomenon. So ask yourself: What would have happened if the HDP had not gained enough votes to enter Parliament or if the AK Party had gained enough votes to form a government?

You should also know that Oy ve Ötesi ("Voting and Beyond"), so prominently reported on in the weeks running up to the election, is an organization intended to give substance to the rumors of vote manipulation and to blacken the AK Party's reputation. The rumors of vote manipulation first emerged in an organized fashion during the June 2013 Gezi Park events, were spread purposefully through activist networks and social media in anticipation of the upcoming election cycle and eventually gave rise to Oy ve Ötesi. Needless to say, little evidence of vote manipulation was found in the three recent elections, and even the author of your publication's June 9 article about Oy ve Ötesi, "How Hope Returned to Turkey," admitted the same at the very end of a 1,000-word article. Probably many volunteers for the group, which is comprised mostly of university-aged people, also realized that the widespread voting fraud that they had been told of simply does not exist and that the Turkish voting system is extremely transparent and highly resistant to manipulation. As in all election systems, incidents of voting fraud do emerge in Turkey and such incidents are taken to the national elections board. If any wrongdoing is identified, the election in the region in question is repeated. This happened in a handful of localities last year after the March 2014 local elections.I know that the intentions of Oy ve Ötesi members are good, and I understand that your intentions are positive as well. I know that in attacking the AK Party and President Recep Tayyip Erdoğan repeatedly over the past year you felt that you were supporting the cause of democracy in Turkey.

The AK Party is the only party with a proven record of democratic political performance in Turkey. The Republican People's Party (CHP) is the party of the old military, state and intellectual elites, all of which are groups that depend on non-democratic processes for their prestige, wealth, and political influence. The Nationalist Movement Party (MHP) are fascists of the old style, and are hampered by their history of political malfeasance, ties to the deep state and the mafia and antique ideology. The HDP is the political arm of the PKK, the armed Kurdish militant group that has waged war against the Turkish state since the 1980s. Their nationalist-leftist ideology, Maoist in essence, is a leftover from the Cold War, and their willingness to resort to political violence was illustrated grotesquely and murderously in October 2014. Currently, we wait to see whether the HDP, or either of the other two other opposition parties, will prove itself truly committed to democratic processes. You must realize that the Turkish people do not need your advice in relation to their political preferences. They understand fully the political choices in front of them. Your attitude toward the Turkish citizenry and their electoral system is condescending and imperial and damages the reputation of your publication. Those who are giving you information about Turkish politics, I am sure, did not mention that your editorial comments echo the traditional, patronizing tone of the Turkish "secular elites." Turkey's citizens made their choice freely on June 7, and now the political parties, as in other European parliamentary democracies, will work to create a coalition. If no coalition emerges, Turkey will go to early elections.

That is how a democracy works.

So I want to give a new message, and I do not think that anyone has said this to you before: Overcome your fear. Islam and democracy do coexist. Islam and a market economy do coexist. No, Turkey does not pose a threat to its democratic neighbors. Turkey is a stabilizing factor in this region and will continue to be so. Turkey is NATO's cornerstone in the region and will continue to be so. Clearly there are sources telling you to be afraid. This is clear from your editorials on Turkish politics. Those sources are misleading you. Trust the political choices of the Turkish people. Turkish people also want prosperity, better lives, opportunity and the ability to determine their own future. From your vantage point this may look like the threat posed by being neutral. Instead, you should understand that the people of this region strive and long for democracy and prosperity. This is fundamentally in accord with U.S. interests in this region.

With deepest respects from a democratic Turkey.