Losing the plot: The meaning of the June 7 elections 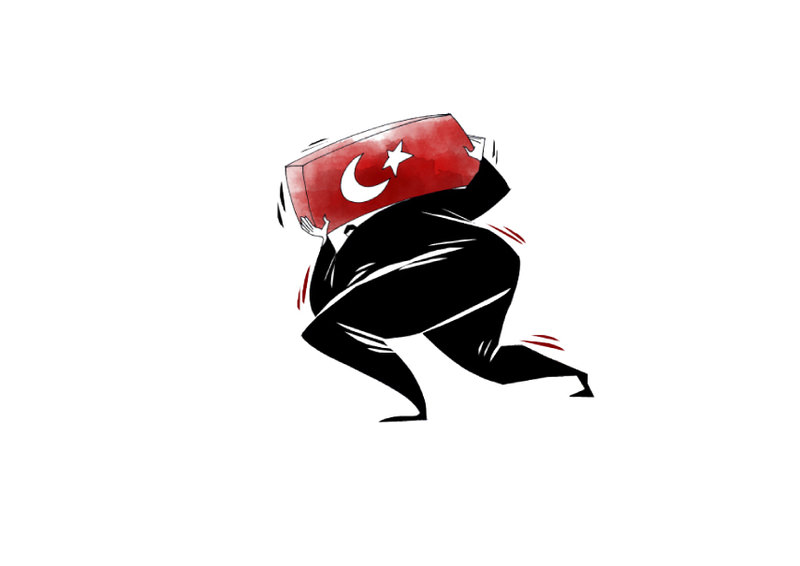 To recapture the ground that has been lost in the last election, the AK Party has to regain control over the narrative of the New Turkey, and this can only be done by articulating an international de-colonial critique of Eurocentrism

Those who oppose Muslim demands for autonomy are powerful and unrelenting, and many. The inability of the Justice and Development Party (AK Party) to win an overall majority has to be understood in the wider context than just the very important contours and textures of politics in the Turkish Republic. Mistakes and missteps are intrinsic to all human endeavours, including governing. I think, however, it would be a mistake to understand the votes of the June 7 general elections as a product of hubris, miscalculation or governmental style. No doubt, there are good arguments to be made in relation to these points. What was lost on June 7, however, was not a just the possibility of a majority, but a narrative.

A narrative is the currency of political contestation. It is the control over the making of meaning that produces shifts in behavior that affect political outcomes. Meaning is not entirely dependent on evidence. It is the way in which actions are understood and the world is made sense of. Once a narrative establishes meaning, then all actions are read through it, such as, President Recep Tayyip Erdoğan is a despot, the AK Party is out of touch and the AK Party government is incompetent, corrupt and authoritarian. These become a means by which all actions are understood, regardless of the actual evidence or past record.

The AK Party's success was based on articulating a narrative that positioned it as the party of the future, promising a new Turkey at ease with itself and its past, an inclusive Turkey, a Turkey that was not simply the patrimony of the entitled and those intoxicated with the West. In steady steps, the AK Party has made many transformations. Turkey has been better governed, more prosperous and more outward looking than in any time in its history. This narrative, however, has become frayed by two main events - the reaction to the Arab Spring and the Syrian civil war, and a failure to systematically and effectively build an international position against neo-conservative global discourse.

The effects of the Syrian civil war are easy to see, as are the shock and reverberations of the overthrow of former President Mohammed Morsi in Egypt. The difficulty here is not only that the two major countries with more accountable governments in the region - Turkey and Iran - have tragically found themselves in opposition to each other, enabling, as a consequence, the most retrograde forces in Islam to thrive. The conflict in Syria should have been seen as a front in a much larger conflict around the world between Muslims who want autonomy and the forces of the old order that want to deny that possibility. Unfortunately, it has become increasingly presented as a sectarian war in which Iran and Turkey have canceled each other out rather than cooperating to produce an outcome that would help the Syrian people and advance the cause of accountable governments for Muslims. There is no doubt that the Arab Spring and its failure as exemplified by the coup in Egypt has undermined Turkey's zero-problems foreign policy, but more importantly, these events have isolated Turkey and Iran as islands in a sea of tyrants and puppets. These developments are not only of significance for foreign policy as in a globalized world, the difference and distance between domestic and foreign affairs has shrunk a great deal.

This is best exemplified by the way in which the war on terror has become the vocabulary of the world order, continually erasing national jurisdictions and building assemblages between domestic and foreign constituencies. It is not only because it is difficult to draw the boundaries of this global conflict due to the myriad actors involved including states, coalitions, non-state organizations or small cells of just a dozen people. It is also due to the fact the both military strategies and the wider narrative accounts of the war on terror treat spaces within nation-states as well as the rest of the world as a single and integrated battlefield.

Islamophobia is one of the glues that hold these dispersed actors and theaters together. Islamophobia is not something to be found only among the nominally non-Muslims as it can also be found among those who, on occasions, are able to declare their Islamic affiliation. Islamophobia is an attempt to discipline and deny Muslim agency. Muslims, as much as non-Muslims, are capable of denying Muslim agency. There are many Muslims in the world today, especially among ruling circles and their hangers on, who are unwilling and unable to concede Muslim demands for autonomy. Islamophobia challenges any political party or movement that questions Eurocentrism, however hesitantly. Many in Turkey have recognized the danger of Islamophobia, and internationally, the Turkish government has been at the forefront of getting the issue recognized and condemned. Conferences have been held, prominent intellectuals and academics have been invited and declarations have been issued. These efforts, while valuable and needed, have not been as effective as one would hope since they operated within a very narrow conception of Islamophobia, in which Islamophobia is what happens to Muslim minorities in terms of hurt and injury, or attacks on representations of Islam. Islamophobia appears as part of the family of racism as conceived as the denigration of groups that are deemed inferior and different. Islamophobia, like racism, however, cannot be usefully contained in such narrow dimensions. Islamophobia, like racism, is not merely a circulation of negative views and beliefs, but rather a form of government mentality. A struggle against Islamophobia that does not take on this dimension is unsustainable and can, at best, offer amelioration and not emancipation. In order to challenge Islamophobia, it is not sufficient to criticize media representations of Islam and Muslims, or demand better treatment of Muslim minorities at the hands of increasingly authoritarian Western plutocracies. This is the second source of the unraveling of the narrative that has weakened the AK Party's desire for an electoral majority.

New Turkey needs a bold narrative, that it rejects Eurocentrism in all its forms. Such a narrative would link it with other de-colonial narratives being generated in Latin America, Africa and other parts of Asia. A New Turkey has to find a home, not just as slum dwellers on the edge of Europe, but as a shining cosmopolis of the Global South, as a generator of better, more humane and more just alternatives to the current world order. Articulating such a vision that would complement the narrative of a New Turkey will help to break the link between the elite intoxicated with the West and their claims to be custodians of a future to come - a future that for them is based on Western values and customs. The opposition to the continued rule of the AK Party is not only a resistance to the policies and practices of the AK Party government, but more importantly, it is a cultural opposition that draws its strength from the global culture of Eurocentric entitlement. By joining the ranks of those who are mounting a de-colonial critique of Eurocentrism throughout the Global South, this government can create an international space for a New Turkey, and in doing so, it can help it recover the narrative that last week's election results show has been lost. The time is not for a retreat from the principles that underlie the AK Party project at its best, but for its renewal. A New Turkey is not just about economic growth and holding office for the sake of holding office - it has to be for matching prosperity with justice and humility. To recapture the ground that has been lost in the last election, the AK Party has to regain control over the narrative of the New Turkey, and this can only be done by articulating an international de-colonial critique of Eurocentrism.