President Morsi, it is an honor working with you 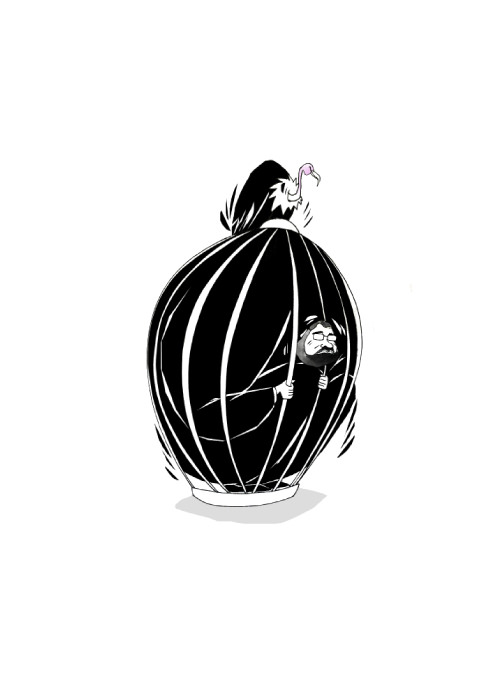 Nobody claims that President Morsi's choices in his short tenure were flawless, but he was Egypt's rightful president nonetheless. After his future as president was stolen by a military junta, the people of Egypt are left with no choice but to hope that his legacy will be revived someday

The title of the article may seem strange for two reasons. First, some people think that Mohammed Morsi is no longer a president since he is currently imprisoned in Egypt and may in fact be hanged soon. The second is that the title is a statement made in the present tense indicating that, I, the writer still continue to believe that I am working with him. Of course some others might also think that I am just one more of those delusional Muslim Brother members. However, the reality of the matter is that I am not a member of the Muslim Brotherhood, and yet I am a member of Morsi's team, and I do consider that Morsi is still currently the legitimate president of Egypt and that by struggling daily against the fascist military regime in Egypt I am committing to the last orders given to me by my leader.

This week, the Egyptian courts and Al-Azhar continued their disgraceful and embarrassing behavior in supporting the fascist July 3 military coup by announcing Morsi's death sentence along with 100 other Muslim Brotherhood leaders after taking the opinion of Al-Azhar's grand mufti who supported the court's verdict. I therefore decided to write this article in support of a leader whom I had numerous differences with and yet also hold unwavering feelings of respect, admiration and inspiration. People, including myself, have often cited the numerous mistakes that Morsi committed while in power, but now I would like to shed light on some of those moments where Morsi embodied the ideals of the Jan. 25 revolution.

I was in Tahrir Square when the results of the first real Egyptian presidential election were announced. I remember the ecstatic feelings of happiness upon the announcement and the celebrations that all the revolutionaries joined in regardless of their stand on Morsi. We were in the square because it was a climax point in our struggle against the military dictatorship in Egypt. Many of us were not convinced that Morsi was the best candidate for various reasons, but the reasons for choosing him significantly outweighed the reasons for doing otherwise. He was a civilian from the working class, well educated, and had suffered like so many other Egyptians from the injustice of the Egyptian military leadership. The other candidate was a member of the military institution and it was impossible for the revolutionaries to accept their return to power. It was clear in the minds of all the sincere revolutionaries that at that instant, Morsi's success was not simply about him as a person, but more about the success of having an average civilian Egyptian candidate as our leader, which was one of the important aspirations of the revolution. His appearance in Tahrir Square among the crowds in simple clothes and barely any security surrounding him reinforced the image and hope that power had returned to the will of Egyptians.

The first time I had a firsthand discussion with Morsi was while I presented the progress of the national development vision project our team had been working on for a few months. The nature of the project was long term while the president's comments were mainly concerned on the urgency of focusing on short-term changes to alleviate the burdens of millions of Egyptian. What ensued was an intense discussion on our team and country's priorities. I remember during the heated discussion the feeling of happiness of being able to sit in front of the leader of the country and passionately debate such a crucial topic without fear of being threatened or marginalized. Here I was sitting in front of the president of Egypt who listened perceptively, argued, on occasions supported some of the views and was fully engaged with a young team from diverse backgrounds of Egyptian society. I remember how doubtful I was when first assigned to this project of the seriousness of the president in supporting it and in the level of empowerment he would provide. However, time revealed to those leading the project such as myself that we were able to bring onboard whomever we saw fit regardless of age, political or religious background or gender. What that first meeting and later ones also revealed was the sincerity of the president in supporting the project, his openness and enthusiasm to discussing differing points of views and his alertness to the topics being discussed.

When I was first assigned to the presidential team and went to one of the presidential buildings, one of the first questions I asked the staff there was the location assigned in the building for prayers. The answer I received was none because they were not accustomed to praying while working. This came as a surprise to me not only because it indicated the tendencies of those previously in power toward such an integral ritual in Islam, but because the buildings were designed in such a lavish manner that they included sleeping and living quarters as part of the offices designed for senior personnel. Later on as I prayed behind Morsi after one of the team meetings I was overwhelmed with feelings of pride and humbleness. Leading and observing rituals such as praying and fasting by the leader of the country in those places was another embodiment of the values of the revolution because it signified the changes we wanted in our approach to religion and its relationship to our daily lives. He consistently reminded us during meetings that our intentions should be to please God through serving the people and ensuring that we approached our responsibilities with the utmost integrity. Those out there who may view this as superficial, I ask them to consider the difference in the spirit of how those basic rituals are now observed not only in the presidential palaces, but all over the country, and compare them to the period of Morsi's tenure.

Many people ask what should be done to support Morsi in his current predicament. To begin with, Morsi is not looking for support for himself, he will not accept that the suffering be alleviated for him and not the thousands of others who have been imprisoned or treated unjustly. Therefore, whoever wants to work on supporting Morsi's case needs to know that they need to be working for the larger cause, which is ending the rule of the current military dictatorship in Egypt. There are three key stakeholders that can contribute to this cause. Firstly, there are the state leaders and politicians all over the world that preach day night about the importance of human rights and democracy. These leaders and politicians need for once to demonstrate the sincerity of what they preach in action. It is not enough to denounce the verdicts and express concern, decisions need to be taken against the current Egyptian regime that has taken the most extreme inhumane measures in dealing with those that oppose them. It is no longer just about recognizing that what took place on July 3, 2013 was an unjust military coup and cutting relationships with the current regime, it is about bringing the current Egyptian leadership to trial for all sorts of crimes against humanity. The second potential supporters are the activists all over the world that are struggling against oppression and injustice. They need to look beyond the issue of whether to support Morsi or not because of differing intellectual or ideological stands. Those activists should realize that there are times when we need to rise beyond the luxury of intellectual differences to address circumstances where basic human rights are being violated on a mass level. Our conscience needs to be alive and alert to the fact that no human being or human system should possess the power to kill thousands, imprison tens of thousands and twist the law to pass mass execution verdicts for hundreds of people. In such circumstances we should look beyond our differences and work together to bring such individuals and regimes down. Finally, the most important player is the Egyptian people themselves. Individuals and regimes such as Abdel-Fatah el-Sissi and those with him will continue to be unjust to everyone they desire. As Egyptians, we have firsthand experience with this behavioral pattern since 1952. We revolted on the Jan. 25 2011 to change this state of affairs, and we must rise again. We cannot depend on others to bring change for us. We need to struggle together for it even if the price was our lives. These were the last words in Morsi's speech. I say this now to tell Morsi your words are true and, Mr. President it is an honor working with you.
Last Update: Jun 18, 2015 10:58 pm
RELATED TOPICS