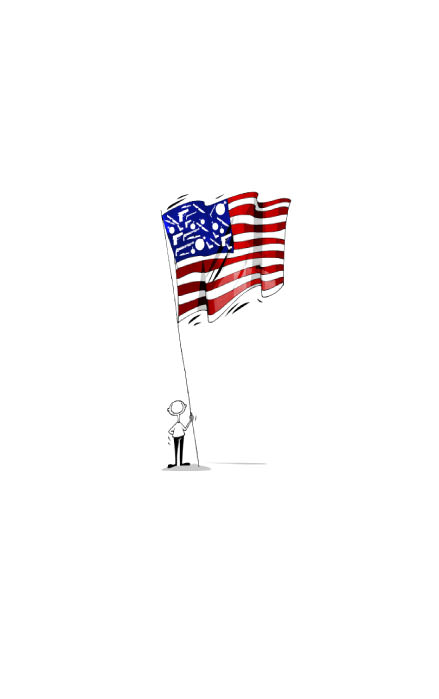 Western countries, in particular the U.S., tends to associate the problem of violence in non-Western nations with systemic deficiencies, structural problems and even religion. However, when they face similar challenges at home, they carefully avoid confronting similar issues and turn the limelight to individual traits and isolated incidents

People tend to associate the United States with liberty, equality and pluralism, yet not necessarily violence. Although Hollywood productions and American popular culture make frequent references to violence, the country is not perceived as a violent place at the international level. Violence tends to be seen as a problem unique to underdeveloped and developing nations, yet ironically it remains part and parcel of individuals' relations with others and the state in developed countries including the United States. Not a day goes by without news of violent crime hitting the wires: Murder, allegedly troubled young people turning into rampage killers, school shootings, gang violence, drug wars, suicides, in-family killings, violence against women and children... Violence, no doubt, is a phenomenon no less American than liberty, equality and pluralism - key concepts affiliated with the American Dream. Although the possession of firearms has been declining over the past four decades, individual armament remains common - a simple fact that has serious consequences since individuals take matters into their own hands when the authorities fail to ensure public safety. To make matters worse, a toxic mix of injustice, structural problems and racism renders the question of violence more complicated.

The most recent Charleston shooting of nine African American citizens at an established black church only adds up to the tragic deaths of young African-American males including Trayvon Martin, Tamir Rice and Michael Brown sparked a national debate over the Second Amendment, which guarantees the right of American citizens to bear arms. The controversy not only caused protests around the country but also rekindled the African-American community's memories of past injustices for these events illustrated the great amount of disparity of reaction towards violence caused by White Americans against African Americans versus violence caused by an American of non- White racial belonging. Structural and cultural factors underlining all these violent assaults rather than individual violent acts themselves require closer examination.

In the Shadow of Weapons

According to the Center for Disease Control and Prevention (CDC), 335.609 gun-related deaths took place between 2000 and 2010. Every day, 289 people suffer from firearm-related injuries and 87 individuals lose their lives. A 2014 report by Congresswoman Robin L. Kelly, meanwhile, points out that "the United States accounts for only 4.5 percent of the world's population [while] 40 percent of all civilian firearms are owned by American citizens." Similarly, there is a major gap between the United States and OECD countries in the possession of firearms and, by extension, gun-related casualties. A 2011 study by Erin Richardson and David Hemenway demonstrates that American women are 11 times more likely to die due to gun-related injuries than the female citizens of other developed countries. While the above-cited numbers are quite surprising, it is a peculiar fact that individual armament is a constitutional right under American law. Although state governments are expected to restrict the right to bear arms, the courts overturned a number of laws in the past citing the Second Amendment. Weapon manufacturers, in turn, have produced rather interesting reports to suggest that individual armament reduces crime. Furthermore, the existing political climate in the United States effectively makes it impossible for the authorities to take necessary measures against the possession of firearms. It is, of course, ironic that the U.S. Government places American lives at risk due to its commitment to the Second Amendment - which represents a serious weakness.

The government's position also shapes public opinion: In July 2014, the Pew Research Center found that, for the first time in twenty years, more Americans support/defend individual armament as a constitutional right than those who call for stricter regulation. The same study concluded that 57 percent of subjects view gun ownership as a preventive measure rather than a cause for concern. What distinguishes modern nation-states from their feudal predecessors, however, is the government's monopoly on violence. Keeping social contract theory -which views individuals as inherently self-interested and refers to a state that emerges out of an agreement among citizens- in mind, the fact that Americans need firearms to develop a sense of security raises serious questions about the notions of public security and the role of state in maintaining the well- being of all its citizens. This is interesting given the fact that U.S. law enforcement agents are equipped with state-of-the-art tools.

The number of violent attacks has recently skyrocketed in the United States, where African Americans are disproportionately victimized. The public perception of violence, as such, remains deeply racialized. Thus even the debates around gun control in the US in effect serve to postpone an apparently more urgent debate on racialization of violence in America. Many observers believed that Barack Obama's presidency would mark the beginning of a post-racial period in the country - which makes the African American community's growing lack of trust in the federal government more ironic. Most recently, grand juries opined that there was no need to prosecute law enforcement agents involved in the murders of 43-year old Eric Garner and 18-year old Michael Brown. The decision was met with fierce resistance from most Americans. Surely enough, many similar incidents took place throughout the civil rights movement's history. In near history, in 1991, the murder of Rodney King led to major reforms within the Los Angeles Police Department. What distinguished the most recent shootings from others, however, is that not only law enforcement agencies but also the justice system effectively facilitated the persistence of covert racism. The fact that the grand jury in the Trayvon Martin murder trial featured no African Americans represented a particularly noteworthy problem. "We have a Jim Crow criminal justice system that does not deliver justice for black and brown people," activist Cornel West remarked. The failure to safeguard African Americans' right to life at a time when the community has produced a number of senior government officials, of course, is a source of concern for many observers. In fact the sheer fact that people reference Jim Crow laws today reflects the depth of the problem at stake.

The American media, needless to say, plays an important role in the racialization of violence by generally attributing violent acts perpetrated by whites to their psychological problems while demonizing African Americans and Middle Eastern perpetrators - which occasionally amounts to outright racism and Islamophobia. The public thus focuses on individual backgrounds of the criminals rather than the crime itself and the underlying cultural prejudices- clearly illustrated by the ultranationalist and racist statements of Dylann Roof before he killed nine people in a house of worship. The racialization of violence brings Slavoj Zizek's idea of biopolitics to mind: According to Zizek, governments invents an "other" to legitimize its use of violence. Leaking a video footage of Mike Brown shoplifting following his death, for instance, serves such a purpose. This sort of perception management efforts, surely enough, allow governments to effectively divert attention from underlying structural as well as cultural issues and perpetuate their hegemony. Violence against Muslims in the US works in a similar way but with more subtle dimensions. 'Muslims' are not treated as a race in the conventional parlance but they are subjected to violence in the same way African Americans have been historically. The 'black' element has been replaced by the 'religion' identification. Stereotyping, block thinking, guilt by association, homogeneous grouping and 'othering' all prepare the ground for violence against Muslim individuals and communities. But they also shape the debate in the post-violence context.

The racialization of violence in the United States bears strong semblance to the Turkish state's former treatment of the Kurdish question as an exclusively military problem until the mid- 2000s when the Turkish state underwent a significant paradigmatic shift under the AK Party leadership. AK Party initiated a comprehensive project called the National Unity and Fraternity Project which entailed a reassessment of the long history of the Turkish state's discriminatory attitude towards minority religious and ethnic groups including the Kurdish and Armenian groups as well as the Orthodox Christian and Alawi groups. The ensuing constitutional and legal amendments involved the re-appropriation of basic rights for these groups while at the same time reinstating their status as equal citizens before the state. This shift in turn opened way for a wider debate in society questioning discrimination and strengthening democratic inclusion of these groups in social and political processes.

The insufficiency of the state to identify the racial aspect of violence in the US, works to effectively avoid the flourishing of a progressive public debate on the existing discriminatory cultural codes. The mainstream American culture further reinforces the perception of African Americans as an inherent part of the culture of violence and avoids engaging deeper questions about social and criminal phenomena. Crime, as such, is being continuously produced and reproduced on the basis of racial prejudice, while the justice system and media outlets deliberately ignore structural and cultural issues to concentrate on -the black criminal-. However, most observers are reluctant to openly discuss the hardships, inequality, professional challenges and push factors that African Americans face in American society today. Meanwhile, the association of violence with race places limitations on the future prospects of Black/African-American Americans. What the country really needs, however, is a multi-dimensional, in-depth analysis of the ways in which African Americans respond and relate to their neighborhoods and their ghettoization process. Keeping socioeconomic injustices and high levels of individual armament in mind, one can see how individualist and racist approaches fail to grasp the severity of the situation today.

On a final note, Western countries, in particular the United States, tend to associate the problem of violence in non-Western nations with systemic deficiencies such as low standards of democracy, restrictions on liberty, human rights violations, structural problems and even religion. However, when they face similar challenges at home, they carefully avoid confronting similar systemic or deeply cultural issues and adopt a race-based approach to turn the limelight to individual traits and isolated incidents. Nevertheless, with trends of violence and radicalization rising at home, the Western countries are losing their credibility for peacemaking at the international level. The need for an honest conversation in the West grows every day.