Remembering Srebrenica: Dark side of the anniversaries 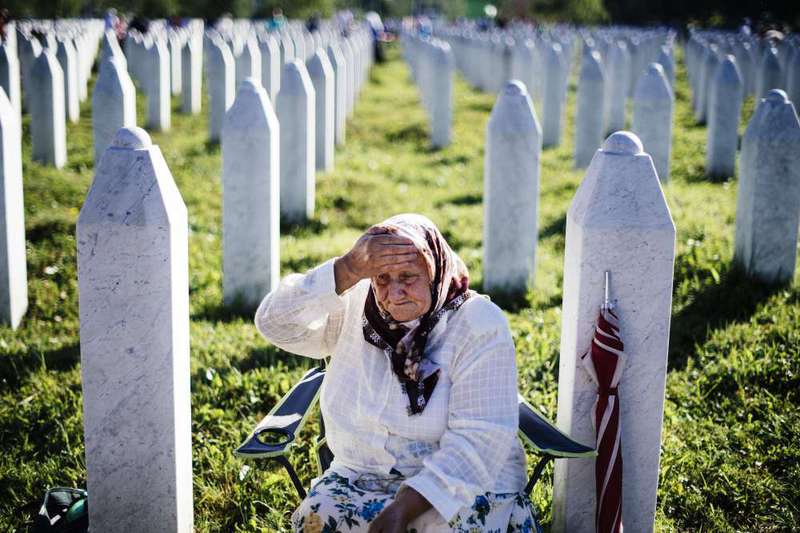 An elderly Bosnian woman mourns at the grave of her relative on July 11, 2015 at the Potocari Memorial Center near the eastern Bosnian town of Srebrenica.
by Sir Geoffrey Nice Jul 12, 2015 12:00 am

Victims of the Srebrenica massacre were commemorated last week. The dark side of such anniversaries, whether it be Srebrenica or Rwanda, is how the international community along with its justice system let the victims down

Anniversaries come round every year. And then they return with special anniversaries on years that reflect our counting of things in fives, 10s, 20s and 100s. The first annual event starts a cycle of similar events all rooted in the original misery.

But we already have anniversary events to record for 2015. Last Saturday, July 11, marked 20 years since the start of the Srebrenica massacre where 8,000 men and boys were slaughtered so that the Serbs in Bosnia could live in a Serb state.

The numbers we use to mark anniversaries as special, in truth, are just random points in time. If we had four fingers - or six - on each hand, counting would be entirely different and there would be nothing that special in the number five or 10 or 100. It is by these 10 digit hands that good holy texts were written and guns and bombs were created; it was by such fingers that great literature as well as propaganda of hate has been written. Humans' 10 fingers - that give anniversaries some special importance - have been responsible for all that is good and bad in our world. The only absolute happening over time is that the world turns, and we face the same bit of the heavens - or hell - once every revolution.

Why then do we trouble ourselves with unhappy memories that we seek to make special by the passage of time? Why not keep our shouting for the football terraces and leave the streets of Istanbul in quiet? Why not let the tears we cry for Srebrenica fall instead, while we watch a sentimental movie? What do anniversaries achieve?

Some, perhaps, are to remind us how terrible humans can be. World War I memorials to the 17 million or so who were killed may outlive all other memorial processes of the bloody 20th century, even those for World War II, carpet bombed and atomic though it was. We need to be reminded how right Nazi Field Marshall Goering was - for both wars - when he said in an interview in his prison cell: "Naturally, the common people don't want war; neither in Russia nor in England nor in America, nor for that matter in Germany. That is understood. But, after all, it is the leaders of the country who determine the policy, and it is always a simple matter to drag the people along, whether it is a democracy or a fascist dictatorship or a Parliament or a Communist dictatorship."

Some anniversary events keep enmities alive, even intentionally. And some anniversary events have very mixed objectives and effects. The anniversary events at Srebrenica are very different. It will be a very long time indeed before we will be able to think of Srebrenica passing from memory. Serbs have not abandoned their long-term project of creating a "Greater Serbia" - at best the project is in a quiet phase. Although the "here-today-gone-tomorrow" diplomats and politicians in countries exercising an interest in the Balkans may never understand this, as it does not fit with short-term desires to fiddle around with the European map - the Serbs surely do.

The Srebrenica anniversary events reinforced the power of the term "genocide." The U.N. argues over the use of the term in a U.N. resolution; the Serbs fail to include the word in any "apology" despite their trying (but failing) at the International Court of Justice to stick the label "genocide" on the Croats for the far lesser crimes they committed against Serbs in the 1990s. The events in Bosnia - attended by the high and mighty from around the world -allowed the naive to believe in the words of woe they speak; the more knowledgeable will see only men and women who represent the great powers who did too little too late and who preferred thereafter to obscure what they knew at the time for fear of being held more accountable for the tragedy. Better for them not to produce aerial imagery of the killings as they happened or the intercepts they held of phone calls between Serb President Slobodan Milosevic and the Bosnian Serb Commander in the field Ratko Mladic.

Serbian Prime Minister Aleksander Vucic attended the events in Srebrenica; he did not let the word genocide fall from his lips but hoped to gather credit for turning up at all. Will this obscure the very simple truth that Bosnian Serb forces supported by Serbia itself committed genocide on 8,000 plus men and boys in the interest of Serbs having dominion over more and more land in the Balkans. Will it distract attention from the very simple fact that Serbia keeps its archives closed? Vucic's government knows well that no country owns up to more than it can be compelled to confess to by the material available to the public.Events in Srebrenica showed the surviving victims becoming politically active because they were so often let down by the courts and the international community. They carry the enormity of their loss, unable to shed it because of Serbia's locked cabinets and because the leaders on the podium at Poticari - the scene of the start of the massacre - would never dream of handing over the keys to their archives.

Victims seem sometimes to count for little when other bigger issues exist - such as whether states once involved should or should not accept the judgments of two different courts - the ICC and the ICTY - that what happened was indeed genocide.

There may be and it is a link the powerful might not like detected. The darker sides of these anniversaries - where there are darker sides - would all be made light by knowledge. What the Serbs actually have in their files; what the great powers actually did to encourage Milosevic to take Srebrenica even if they had no expectation the Bosnian Serb troops would engage in wholesale slaughter; how the Dutch were left uninformed about the fact that they would get no support; what the West discovered soon about what was happening.

In their own way these anniversary events are about the developing and irresistible right of the citizen to know what affects him. His right no longer to be treated as a creature with cotton wool in his ears and a mask over his eyes, each of which will only be removed when his political masters think it is time.

Let us remember the thousands of victims of Srebrenica, their families and their friends. Let us not forget that their suffering has been prolonged and will continue to be prolonged because of the rule that no country will ever own up to what it has done unless forced and that no country will offer a genuine unconditional apology until it is too late to count.
Last Update: Jul 12, 2015 10:10 pm
RELATED TOPICS