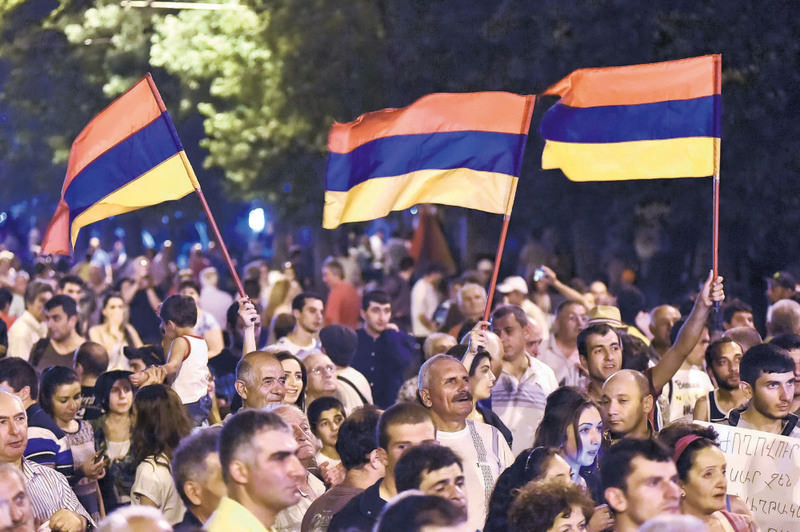 Protesters wave Armenian national flags during a rally against a hike in electricity prices in Yerevan, Armenia.
by Muhammet Koçak Jul 21, 2015 12:00 am

Although the recent protests in Armenia may seem to be sparked by the announcement of a 20 percent price hike in public electricity, the main reason behind them is the economic and political dependence on Russia and the crisis in Ukraine

Last month the Armenian Public Services Regulatory Committee announced a 20 percent price hike in public electricity, making household electricity costs the highest in Armenia amongst other Commonwealth of Independent States (CIS) countries. Hearing the news, hundreds of Armenians filled Freedom Square in Armenia's capital Yerevan on June 17. Led by the No to Plunder initiative, the protesters quickly swelled to the thousands and the protests spread to other cities. It was more than just the increase in electricity prices that motivated thousands of Armenians to go onto the streets against the police forces. Electricity is neither the sole cause of the crisis in Armenia, nor does the solution exclusively lie in resolving the problems of the electricity market there. People by and large left the streets after the suspension of the price hikes, but the root causes of public outrage are still latent. Should the economic conditions, which are indirectly dependent on the crisis in Ukraine, require similar sanctions, such protests may reoccur. Now that the protests have cooled down, it is time to evaluate the root causes and possible future consequences of the recent protests for Armenia and for the region.

A small-sized, underdeveloped country, Armenia's foreign policy, economy and domestic politics are inherently related to the two dynamics of the burden of the Soviet past and genocide claims. Despite Armenia's declaration of independence in 1990, similar to the other formerly Soviet countries, the economic resources, political dynamics and bureaucratic institutions of the country remained under the control of the Russian Federation through economic and political ties. Today's Armenia has bitter relations with Turkey over its genocide claims and the unresolved Nagorno-Karabakh conflict with Azerbaijan. A landlocked country, the economic and political ties of Armenia's two major neighbors are effectively broken. More importantly, Armenia's inimical relations with Azerbaijan and Turkey help sustain Russia's hegemony over Armenia.

Upon the deterioration of the economy in Russia, Armenians had the chance to reconsider Armenia's relations with Russia and the image of Russian hegemony in the country was questioned. The monopoly in the electricity distribution market in Armenia is held by Russian-based Inter-RAO. Headed by Russian President Vladimir Putin's close aide Igor Sechin, the company literally owns 100 percent of the market share. It is noteworthy that along with the dams in this mountainous country, Armenia has a nuclear reactor producing almost half the electricity the country needs. Having such resources at hand, Armenia even has an export agreement with Iran through which it barters for gas with its electricity supply. Following the price hikes in electricity, in this electricity supply-rich country, Inter-RAO was blamed for placing an unfair burden on the Armenian public. Consequently, within the past month, relations between Russia and Armenia and the latter's dependence on the former has been seriously questioned.

Following the crisis in Ukraine, the economic situation in Russia has spilled over into Armenia as well. However, following the Ukrainian crisis between Russia and the West, Armenia initially sided with Russia from the beginning, even increasing its political and economic allegiance. Armenian President Serzh Sargsyan signed an agreement to join the Eurasian Customs Union in January 2015, furthering the country's economic dependence on Russia. However, due to the crisis in Ukraine and its deteriorating effect on the Russian Federation, the economic parameters in Armenia have worsened day by day, along with Russia's image. The worsening of economic conditions in Russia has decreased the remittances coming from Armenian migrant workers. The unemployment rate is also on an upward trend. An incident that took place on Jan. 12, days after the accession of Armenia to the Eurasian Customs Union, added insult to injury. Six people from the same family in Gyumri, Armenia, which hosts a Russian military base, were found dead. The judicial investigation pointed to the Russian military base and it was revealed that the murderer was Valeriy Permakov, a Russian serviceman stationed at the base. The incident stirred up public outrage and the rehearsals of the recent protests took place in various cities around Armenia. Thousands of Armenians filled the streets and demanded a fair trial for Permakov to take place in Armenian courts, which never happened.

So far, Armenia has begrudgingly shared the economic burden of Russia's Ukraine policy. Sustaining its deep partnership with the Russian Federation has become costlier than ever for the Armenian government. Armenians protested in two mass demonstration waves, either directly or indirectly, against Russian hegemony over their country. These two countries still share strong economic and political ties, which will obviously endure in the near future. However, the more these ties become costly for the Armenian political elite and its citizens, the more alternatives can be considered. In such a scenario, Armenia may even seek to soften its relations with Turkey and Azerbaijan. Although it seems a longshot for apparent reasons, such a scenario would greatly serve the peace in the southern Caucasus as well as Armenia's economic and political stability.
RELATED TOPICS