The fire in the Middle East would engulf the whole world 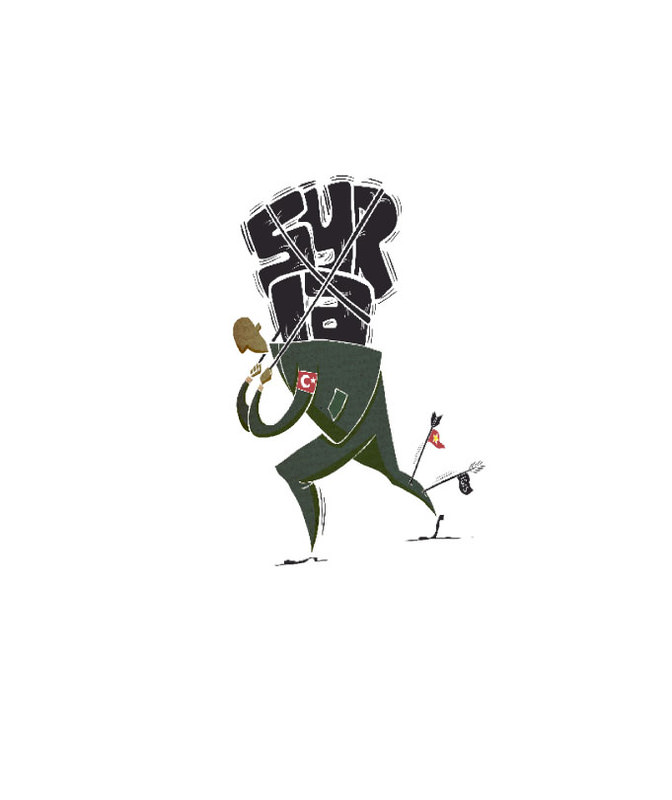 Western democracy rose on the idea of justice and created a valuable civilization. But the West should leave the Sykes-Picot paradigm now, make peace with the others within and contribute to a law-based reconstruction of the Middle East

Turkey has done its best in the last five years to minimize the impact of the brutal war just across its 911-kilometer southern border. While doing that, it has not remained insensitive to the tragedy in Syria and to the people flocking to its borders. It has admitted around two million Syrians and Iraqis. Among these are people from different faiths, beliefs and ethnicities. Turkey has never adopted a discriminatory stance on this issue. It has set up modern refugee camps, which have been lauded by both the U.N. and all foreign officials visiting the region. With access to medical care, education activities and places of worship, these camps are the most humane of their kind in the world. We are talking about a very complex operation here, which ensures that even groups hostile to each other are not placed side by side. And all this operation has cost Turkey nearly $6 billion to date. Turkey has provided a haven for a generation that would probably have been massacred if Turkey had closed its doors. It has thus left a profound example of humanity in the context of the 20th century, which will be considered deficient in terms of human civilization, to future generations.

Of course, a country needs to have political stability and a strong economy to achieve such a huge operation. Perhaps the greatest luck of the Middle East and Europe is the presence of a robust and rapidly developing country like Turkey, a hybrid Western nation in between these two contrasting regions. When the Justice and Development Party (AK Party) came to power in 2002, Turkey was faced with a similar situation to that that Greece is facing now. Only five years earlier (1997), the secularist army and civilian elites staged the Feb. 28 coup, which resulted in the plundering of the national economy and the transfer of $500 billion to pro-coup circles. That coup had targeted devout people in the country. Conservative segments, dubbed "Anatolian tigers," were getting richer by not doing business with the state, but through growing commercial relations with the world, and gaining greater political power in the process. The coup filled some pockets while trying to block conservative segments economically and politically. But the conservatives have not resorted to arms in spite of suffering that immense injustice. They have considered politics as the arena of struggle. Plundering by the corrupt old center politics and elites dragged the country into a serious crisis in February 2001. The government could not pay salaries. The central bank ran out of reserves, while debts to the IMF reached $27 billion.

Today, Europe and the West have a strong ally between them and the blood-soaked Middle East that shields them from threats and a huge refugee influx. This is because the AK Party and President Recep Tayyip Erdoğan, and naturally their peaceful conservative base, have modernized this country rapidly in 10 years. Will those who have unjustly accused the AK Party and Erdoğan until now, who have even conducted operations via the Islamic State of Iraq and al-Sham (ISIS) or who have maintained their colonialist approach, just because the AK Party is conservative, go to the trouble of a rethink after the Suruç attack? If Turkey had been in a similar situation as Greece now, if it had lacked the political will and economic power to admit two million refugees, or if it had been in chaos itself, wouldn't Europe have found Syria at its doorstep? Twenty-five thousand people from the West have joined ISIS so far. Those cutting off heads and broadcasting it live are British members of ISIS. The suspect who brought four girls to Syria and was caught later turned out to have ties with Canadian intelligence. Though there are many such examples showing that the West has failed to fulfill its responsibility, there was an effort to portray Turkey as pro-ISIS and put pressure on it. This despite Turkey declaring ISIS a terrorist organization in October 2013 and losing hundreds of citizens in Reyhanlı, Niğde, and most recently in Suruç.

Nowadays, both ISIS and the PKK are killing people in Turkey. Thirty-five ISIS members were killed in operations that Turkey conducted in accordance with the rules of engagement upon losing a soldier. Many command centers of ISIS were destroyed. But it was not a first. For Turkey had previously launched an air strike on an ISIS convoy, and Erdoğan's name had been included on the group's death list. The West has never treated Turkey ethically. It has regarded ISIS and the PKK as an opportunity to undermine and pressure the AK Party or Erdoğan, with whom it does not want to work. It has thus aimed at creating a rupture in Turkey's domestic politics. While these efforts have failed in the local and presidential elections, a partial success was achieved in the general elections.

The PKK, which is pampered today, shoots young police officers in the neck while they sleep in their homes and kills civilians alleged to be ISIS members just because they have a beard. But the Peoples' Democratic Party (HDP), a party close to the PKK, and which enjoys more leeway thanks to the settlement process that the AK Party has singly initiated by taking risks, continuously call on people to take to the streets. HDP Co-Chairs Selahattin Demirtaş and Figen Yüksekdağ pursue a provocative policy that is shameful in terms of civilian politics. They are so ambivalent and insincere that they even refused Prime Minister Ahmet Davutoğlu's call to "sign a joint declaration against terrorism" after the Suruç bombing. However, immediately after the attack, Demirtaş told the Kurds to "provide their own security" and Yüksekdağ put the blame on the government.

As a result, the hard-won social support for the settlement process was also undone and the process was rendered meaningless due to the efforts of the PKK and the HDP. How can a political party continue a process with such an organization, while the PKK does not keep the promise it gave in May 2013 to pull its troops out of Turkey, does not take any steps and kills people in their homes? Besides, boundaries were pushed and the AK Party did not end the process and risked losing votes after the killing of 53 citizens in October 2014, upon the HDP's call on its supporters to take to the streets. Needless to say, no matter what the PKK/HDP does, Kurds in Turkey are first class citizens now, and their current problems will also be solved. The PKK problem is a separate issue.

Many lies are told and countless violations of the PKK and HDP are ignored just to undermine the AK Party. Foreign media and its pro-Feb. 28 coup collaborators in Turkey have taken the PKK and HDP under their wing, so to speak. How nice it would be if both the U.S. and the EU exerted pressure on these actors for the sake of the process. So, what would result from that? Let's suppose Turkey becomes destabilized. How would that affect Europe? In this region and even in the whole world, Turkey and the AK Party is an indispensable partner with an ability to develop ties with East and West alike, with a functioning state system, strong economy and democracy. Reasonable Westerners have to take this partner's sole demand seriously: equal relationship and respect.

Western democracy rose on the idea of justice and created a valuable civilization. But the West should leave the Sykes-Picot paradigm now, make peace with the others within and contribute to a law-based reconstruction of the Middle East. And as a miracle of history, Turkey is the most precious partner in this effort just beside it. Not undermining, but strengthening it is in the interest of all. But the West should conduct self-criticism first to be able to see that.
Last Update: Aug 26, 2015 7:26 am
RELATED TOPICS