Why did the PKK and HDP commit this lunacy? 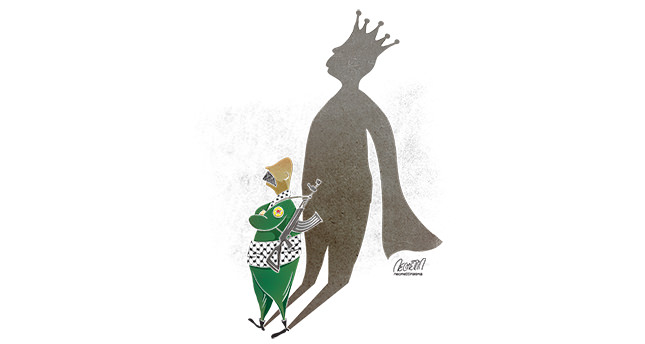 Last Friday, the statements of an Ankara-based Western diplomat who met with Ankara representatives of national newspapers and who - it was especially emphasized - is authorized to speak on behalf of the anti-Islamic State of Iraq and al-Sham (ISIS) coalition forces, drew attention.

Apparently, the meeting was envisioned to be helpful in terms of preventing speculative reports about the agreement between the U.S. and Turkey and to clarify the framework.

Here are the key points the diplomat who was authorized to speak on behalf of coalition forces made:

"The latest enhanced cooperation between Turkey and the U.S. will put additional pressure on [ISIS] and help in solving regional problems."

"U.S.-Turkish cooperation will be long-term, not temporary."

"The perception that Turkey is not serious about the fight against [ISIS] and is using the agreement with the U.S. over access to bases as a cover to conduct a series of operations against the PKK is not true. That is a too short-sighted assessment of the Turkish commitment to fight [ISIS]. Turkey proposed opening up other bases, too, as part of the anti-[ISIS] fight."

"U.S. armed drones deployed in İncirlik have already begun conducting operations. The next step will be the deployment of warplanes and other aircraft. We expect Turkish warplanes to join as well."

"We will also work to clear the Turkish border of [ISIS] in a durable way so that they will no longer have control over areas close to the border. Our primary purpose is to drive [ISIS] out of an area extending from Jarabulus to Azez and help local fighters to retake control of the [ISIS]-free areas."

"We have been making clear to the PYD [Democratic Union Party] our expectation that people - Syrian Arab, Syrian Turkmen and even possibly Syrian Kurds - who were displaced should have the ability to go home as they want to do and feel safe to do so."

"I have never heard a U.S. official describing the PYD as a strategic ally. The term strategic ally has very different meanings for the U.S. U.S. cooperation with local forces in Syria is nothing but a tactical one in the fight against [ISIS]."

"It's up to the Turkish government to decide what to do within its borders. We will respect every decision by Turkey on this issue."

"As for the fight against the PKK, the U.S. supports Turkey's right to self-defense. We have already stated that the ongoing operations are launched as a response to PKK's attacks."

"The U.S. stance on the settlement process is as follows: This is Turkey's domestic issue, an internal process and should remain so. The first step to return to that settlement process should begin with the PKK ceasing its attacks and its terrorism."

***These remarks directly overlap with various statements from high-level U.S. officials. So, it appears that the diplomat of a key coalition country "who spoke on condition of anonymity" is actually an American and speaks with authority.

It is understood that, as two important strategic partners, the U.S. and Turkey converge on the issues of Syria, Iraq, ISIS and the PKK.

The diplomat's remark that the ethnic elements - read PYD and PKK - supported in Syria cannot be lumped together with Turkey as a strategic partner is important. It is also known that the PKK offered the U.S. after launching the attacks that had ended the reconciliation process to mediate talks, but was rejected and not given a direct answer.On July 11, the PKK announced that it ended the process and started a popular revolutionary war, for no apparent reason. ISIS has virtually come to the help of the PKK and carried out a suicide bombing in Suruç, killing 32 youths who were heading for Kobani. Thus, the PKK began its attacks to "cantonize" southeast Turkey. Meanwhile, the PKK-controlled Peoples' Democratic Party (HDP) infected the political arena with provocative calls for street protests.

But what did they expect?

The HDP expanded its base beyond just the Kurdish population and increased its vote share from 6 percent to 13 percent in the June 7 elections. It could achieve this thanks to the reconciliation process, which was initiated by President Recep Tayyip Erdoğan while he was prime minister, taking a great risk. It was the Justice and Development Party (AK Party) that had put an end to the denial of Kurdish identity and showered in investments the southeastern and eastern regions, which had been left in misery throughout the Republican era. It was the AK Party again that scrapped laws banning the use of the Kurdish language, allowed public and private Kurdish-language TV and radio stations to broadcast, legalized the use of Kurdish for political campaigns and got the reconciliation process formalized by Parliament.

But the PKK and HDP ignored imprisoned PKK leader Abdullah Öcalan's calls due to ideological rigidity and worries about losing their privileged position and took advantage of ISIS's attack on Kobani to end the process despite Öcalan. They wanted to supplant the philosophy of the reconciliation process, which is based on the union of Turks and Kurds, with a separatist Kurdish movement fueled by the situation in Kobani.

For this purpose, in order to demonize Erdoğan, Prime Minister Ahmet Davutoğlu and the AK Party - the guarantors of peace - and to reverse the process, they began to circulate the lie that the AK Party supported ISIS. However, Kobani was saved from falling to ISIS because Turkey allowed heavily armed peshmerga forces from Iraqi Kurdistan to cross over its border with Syria while providing humanitarian assistance at the same time. The HDP, which had accused the AK Party of supporting ISIS, voted against a motion allowing peshmerga forces to cross into Kobani.

The PKK and HDP misinterpreted U.S. support for the PYD in northern Syria against ISIS and thought they got U.S. consent for creating a PKK state in Turkey's southeast, northern Iraq and northern Syria.

In domestic politics, the anti-AK Party bloc deemed the PKK and HDP suitable for a political operation ahead of the elections. These circles - secularist elites, militarist socialists and the Gülen Movement - which had led to the Kurdish problem, began to support the PKK. The HDP passed the 10 percent election threshold and ousted the AK Party from power. But its advocating violence has paralyzed politics. With the country drifting into chaos, the PKK would stage a revolt and easily create a "fait accompli," and the secularist elites would get rid of the AK Party and Erdoğan.

That was the plan.

The PKK and HDP wasted a historic opportunity for the sake of this unrealistic plan and chose to fight instead. They vastly overrated themselves and underestimated Turkey. Now in a panic, they are trying to portray themselves as victims so that the process can begin again. However, they are the ones who killed people in front of their families or while sleeping in their beds. And 80 percent of the Turkish public supports the operations against ISIS and the PKK.The PKK and HDP have lost their position as interlocutor. The process will proceed quicker by reaching out to the Kurdish people. The PKK can only create the conditions for laying down arms by pulling out of the country.

Not having severed its ties with violence and with its eclectic and provocative moves going on, the HDP has hard times ahead.
Last Update: Aug 26, 2015 7:26 am
RELATED TOPICS